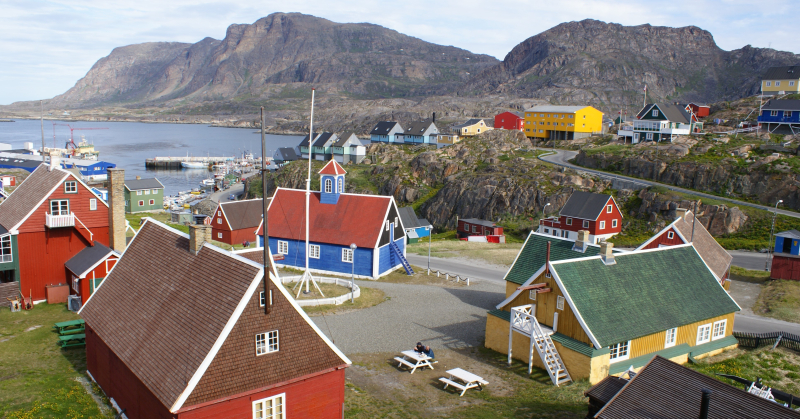 Colorful houses, like these in Sisimiut, Greenland's second largest city that sits on Kangerluarsunnguaq Bay below Palasip Qaqqaa mountain, are found all across Greenland. (Photo by Algkalv via Wikipedia Commons)

Sorry, United States, but Greenland doesn't want to become part of us.

Yes, the U.S. buying the world's biggest island is, or rather, was a thing.

Donald J. Trump, true to his real estate development roots, has broached the possibility of Greenland, according to The Wall Street Journal.

People familiar with the discussion, reports the newspaper, said Trump has, "with varying degrees of seriousness, repeatedly expressed interest in buying the ice-covered autonomous Danish territory between the North Atlantic and Arctic oceans."

Joking ensues: As expected, mocking on social media has been rampant. It would have happened even if, in a weirdly fitting way, Trump's interest in buying Greenland hadn't been revealed on the eve of today's National Tell a Joke Day.

Yes, the standard green/golf course greens connection has been made. Repeatedly.

A Democratic presidential nominee wannabe bought a Greenland-for-sale related website and turned Trump's interest in the independent Danish island into a fundraising website for his long-shot effort at the chance to unseat 45.

Real reasons for Greenland interest: But the idea, once you sign off Twitter, isn't as far-fetched as it first seems.

United States has long considered Greenland to be a strategic military location.

Thule Air Base on the island's northwestern coast is the U.S. Air Force's northernmost facility — it's less than 1,000 miles from the north pole — and provides America with missile warning, space surveillance and a constant view of both military and for commercial air space.

And while this summer's historic heat wave has chipped away at Greenland's ice at alarming rates, the exposure of land has made access easier to the island's vast quantities of metals and energy sources, including iron ore, lead, zinc, diamonds, gold, copper, uranium and oil.

Joking aside, a possible U.S. purchase of Greenland, whose 836,330 square miles are almost precisely the combined size of Alaska and California, has been explored seriously twice before.

However, it looks like Trump isn't going to get, whatever his reasons, Greenland.

Greenland's tax system: Still, since heretofore unthinkable things seem to happen in connection with the current Oval Office occupant, I decided to take a look at Greenland's taxes.

An individual may be taxed in Greenland on the basis of full or limited tax liability.

An individual who is resident in Greenland is subject to full tax liability on one’s worldwide income unless the individual is considered a resident of another country according to a double residence clause in a relevant double taxation treaty (DTT).

An individual who is fully tax resident in Greenland will, as a main rule, be taxed at up to 44%, depending on the municipality of taxation. Some deductions are applicable.

An individual with limited tax liability to Greenland will, as a main rule, be taxed at up to 44% on income from sources in Greenland.

Individuals working in Greenland in relation to oil, gas, and mineral activities or construction activities outside existing towns and settlements are taxed at a flat rate of 35% with no deductions allowed, provided that they have not been taxable to a local Greenlandic municipality for six months prior to the commencement of the activities.