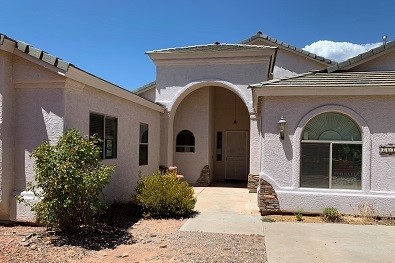 Arizona home to be auctioned to pay federal tax debt.

I've seen a lot of estate sale signs lately. Either it's an indication of the changing demographics of my part of Austin or folks are trying to fancy up their garage sales.

An estate (or renamed garage) sale basically is a way to dispose of most of an owner's property either because family doesn't want their deceased relative's items or the goods need to be sold to make a move easier.

Uncle Sam regularly holds his own versions, but in many instances these government sales are to settle tax debts.

Nationwide asset auctions: Each year, says the U.S. Treasury's auctions website, 300 or so public auctions are conducted throughout the United States and Puerto Rico.

Upcoming auctions on the Internal Revenue Service's seizures-for-sale online page primarily feature real estate and you can get some bargains. 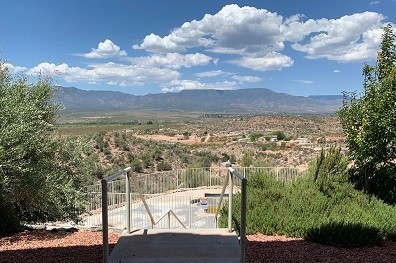 The Arizona home pictured at the top of this post and the view from the back of the house at right, for example, has almost 3,400 square feet of living space parceled out among four bedrooms, three full baths, a living/dining room, den and family room (not sure the difference in the last two …), along with a three-car garage and pool on just more than three acres.

That's almost enough to make me put a for sale by owner sign in my current Austin front yard and start packing.

It's also enough (or little) to earn this week's By the Numbers recognition.

More locations, more items: Not a fan of the desert? No problem.

There also are federal tax auctions on homes here in the Lone Star State. There are a couple in towns not far from Austin, including one that's closer to my mother.

In addition, the IRS is looking to unload commercial property and a selection of vehicles.

At these additional auctions you might be able to pick up for some spare pennies such things as high-speed watercraft, like the hydrofoils shown below, or a private plane.

Check out the links on Treasury's main auctions page. They provide details on the property on the block, as well as locations of the sales and those in which you can participate online.

I live close enough to several lakes for some of the watercraft to pique my interest, especially with Texas' new tax break for yacht owners. Then I remember that a boat is a hole in the water into which you pour your money. I'm already doing enough of that with my house maintenance!

So for the time being I'll probably stick with in-person perusal of nearby local estate sale tchotchkes that folks are selling of their own volition, not because they have to pay Uncle Sam.

But if you're interested in some of the feds' items up for auction, have at 'em. The U.S. Treasury would appreciate your contribution.