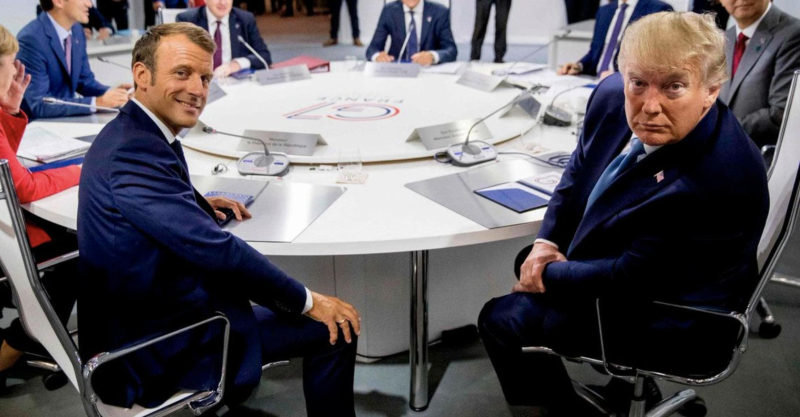 Emmanuel Macron, left, and Donald J. Trump at the beginning of the just-completed G7 session in France. As the international gathering closed, the pair announced a deal had been reached to ease U.S. concerns over France's digital tax and French worries about possible U.S. tariffs on Gallic wines.

Good news for French wine fans. Donald J. Trump and Emmanuel Macron apparently arrived at a rapprochement at the G7 meeting in France this weekend.

The threatened tariffs on French wines won't be imposed.

That means the only taxes we wine drinkers will face are the long-standing U.S. federal and state-levied excise taxes on our favorite fermented grape products.

Tech, trade and taxes: The relationship between the leaders of the United States and France has been strained of late.

Ever since France announced this summer that it would tax high-tech firms, notably U.S.-based digital giants such as Google, Facebook, Apple and Amazon, Trump has been threatening to slap tariffs on French wines as retaliation.

France just put a digital tax on our great American technology companies. If anybody taxes them, it should be their home Country, the USA. We will announce a substantial reciprocal action on Macron’s foolishness shortly. I’ve always said American wine is better than French wine!

But the face-to-face meetings in Biarritz between Trump and Macron at the G7 apparently paid off, at least when it comes to potent potables.

Toasting a no-tariff deal: French and U.S. negotiators have reached a compromise agreement on France’s digital tax, according to various news reports.

Trump and Macron confirmed the progress, but offered no details, at their joint wrap-up press conference this morning.

A source close to the negotiations, however, told Reuters that the deal made between French Finance Minister Bruno Le Maire, U.S. Treasury Secretary Steven Mnuchin and White House economic adviser Larry Kudlow would have France repay companies the difference between a French tax and a planned mechanism being drawn up by the Organization for Economic Cooperation and Development.

Toasting no tariffs, but taxes remain: I love a glass of red now and then and tend to stick to Texas wines, but if you prefer a vintage Sauvignon blanc from the Loire Valley or a nice Félines Rosé, then à votre santé.

You won't have to deal with tariffs, which essentially are taxes on the consumers who buy the products that are the focus of trade wars.

I hear the glasses clinking, even at this early hour, all across the United States.

At the federal level, Uncle Sam collects six excise tax rates that depend on the percentage of alcohol that the items being taxed contain or the method of production.

Then there are the state alcohol taxes.

The Tax Foundation map below gives you an idea of how your state's wine taxes compare. 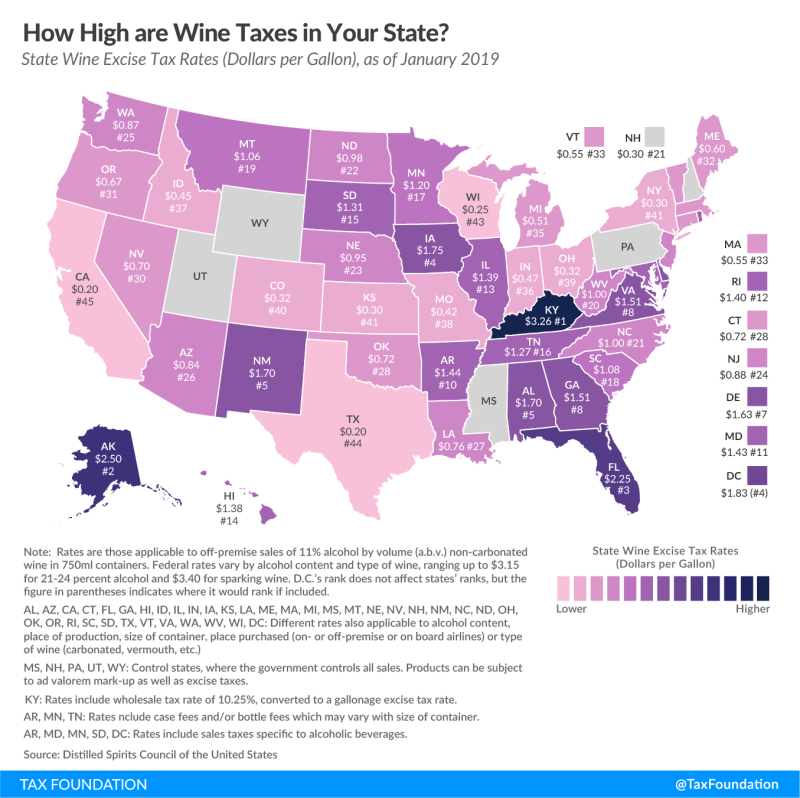 "States tend to tax wine at a higher rate than beer but at a lower rate than distilled spirits due to wine's mid-range alcohol content," notes Tax Foundation policy analyst Janelle Cammenga.

Still, the differences from state to state can be dramatic.

Highest, lowest state wine taxes: Not surprisingly, Kentucky has the highest wine excise in the country at $3.26 per gallon. That's no doubt due to pressure from Bluegrass State bourbon distillers who don't want to give a competing alcoholic beverage any advantages.

A distant second is Alaska with a wine tax of $2.50 per gallon.

Wine connoisseurs get some tax breaks in California and Texas, two states with healthy vineyards and lots of wineries. Both the Golden and Lone Star States collect only $0.20 per gallon.

Regardless of whether you raise a glass of domestic or pour from a foreign vineyard, cheers to the least taxed bottle of your choice.