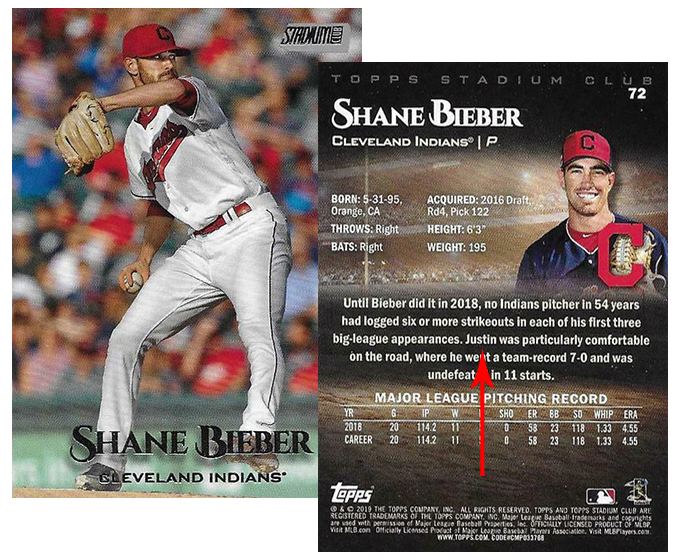 Oops! Someone at Topps was thinking about someone else when Shane, not Justin, Bieber's baseball card was produced.

Did your mom throw out your baseball card collection when you went off to college?

If so, you can start anew today, National Baseball Card Day, by picking up some brand spanking new cards.

The Topps Company, the official trading card partner of Major League Baseball, is celebrating today by giving out free specially-made cards at MLB stadiums across the country, local hobby shops and a couple of major retailers.

As the photo at the top of this post shows, the company erroneously referred to the righthander as Justin on the back of the card.

Bieber, the major league ball player, took it in stride and with good humor.

He posted the mistaken identity card on Twitter, simply noting "Nice Topps" with an added smiley face emoji. That got a quick, contrite "Is it too late to say sorry?" response from the card company.

Shane's good humor probably comes from the fact that such confusion and jokes have been around for a while. During last year's MLB Players' Weekend when players replace the names on their jerseys with their nicknames, Shane's read Not Justin.

But even better, baby, baby, baby, was that Justin Bieber chimed in on the Topps confusion, too, telling Shane that he felt like they now have a special connection.

I feel like we have a special connection https://t.co/fv80Lf8ABu

Shane will be wearing the Not Justin nameplate again this coming (Aug. 23-25) Player's Weekend, but maybe for future events he'll be known as Justin's Pal.

Valuable collectibles: Anyone who has one of the reported 25 Shane/Justin Bieber cards could cash in on Topps' mistake. Several eBay sellers are asking several hundred dollars for the erroneous card.

While that's still a way to go from some of the most valuable baseball cards, like Mickey Mantle's 1952 Topps that sold last year for nearly $3 million, it's still impressive.

So if you do have one, make sure your mom or spouse knows that it's not to be tossed.

Also note that you'll face some special tax considerations on profits made from the sale of a collectible.

If you hold the item long enough, it qualifies for the generally lower capital gains tax treatment.

Special tax treatment of collectibles: The applicable capital gains tax rate, however, is not one of the commonly referenced rates we pay for traditional assets.

Those are the 0 percent, 15 percent and 20 percent rates that were left intact by the Tax Cuts and Jobs Act (TCJA).

These rates still apply to any profit you make on assets you sell after owning them for more than a year, although the law did change the income brackets (which are adjusted annually) to which each of these now apply.

Capital gain tax differences: Why the special, higher rate for collectibles? The public policy argument for a different, and less advantageous, tax rate for profit on collectibles is that such sales don't have any broader economic impact.

True, culturally society benefits from preservation of works of art, antiques and other collectibles.

But, goes the tax argument, there isn't a larger-scale economic gain on investment in collectibles like we often see from investments that produce innovative techniques, new products and higher productivity.

Defining a collectible: So what exactly is a collectible? The short, and some might say smart-ass, answer is simply that it's an item worth collecting.

The IRS, however, has some guidelines. Here are some things that for tax purposes (and noted in IRS Publication 17) are typically considered collectibles:

No, baseball cards are not specifically listed in IRS documents. Neither is that Babe Ruth autograph that's been handed down through your family for decades.

But those and other sports memorabilia generally are considered collectibles when they have an additional value based on their rarity and market demand. Essentially, the opinion of other collectors and experts, based on what they are willing to pay for your collection, determines its value and collectability and tax rate.

For example, a typical one-ounce gold coin is worth about $1,500 today based upon the value of the metal. It's not considered a collectible by the IRS. However, a rare 19th century gold coin could be worth many times more to a collector, even though it is made of exactly the same amount of gold as the common coin.

The same approach applies to sports-related items. Your autographed MLB card of Al Bumbry is valuable to you on a sentimental basis because you saw him when he played on the Baltimore Orioles 1983 World Series championship team. But it won't net you much on the sports memorabilia market.

If, however, you ever get your hands on one of the only 75 Honus Wagner cards issued in 1909 by the American Tobacco Company, you are set for life. One of those cards was privately sold earlier this year for $1.2 million.

Figuring your tax: As with all investments, you're taxed on the profit. That's what you sell it for minus its basis.

Basis begins with your acquisition cost, which for collectibles generally include auction and/or broker's fees along with what you paid for the item.

If you inherited the collectible, your basis is the item's fair market value at the time of bequeathing owner's death.

Note, too, that if your collectible item requires special care, for example, added costs to maintain the piece or restore it, those expenses also are part of your basis in the collectible.

What you get when you sell the item, less the accumulated basis, is the amount upon which you'll owe taxes at 28 percent.

That rate, of course, is if you sell it more than a year after buying or inheriting it. As with all capital gains calculations, if you sell a collectible you've owned for a year or less, your profit is taxed at your ordinary income rate.

Also note that you might not owe the 28 percent rate.

If you figure your tax using the maximum capital gain rate and the regular ordinary tax rate for your income level and find that the ordinary tax is lower, then that's what you pay.

Why you collect: Finally, the approach you take to your collecting also could affect any potential taxes.

Collectors of valuable items do so because they are (1) dealers in the goods, (2) see the items good investments or (3) simply enjoy collecting as a hobby.

The tax treatment for each circumstance is different  and discussed in the CPA Journal's article Planning and Tax Considerations for Collectibles, which earns it this weekend's Saturday Shout Out.