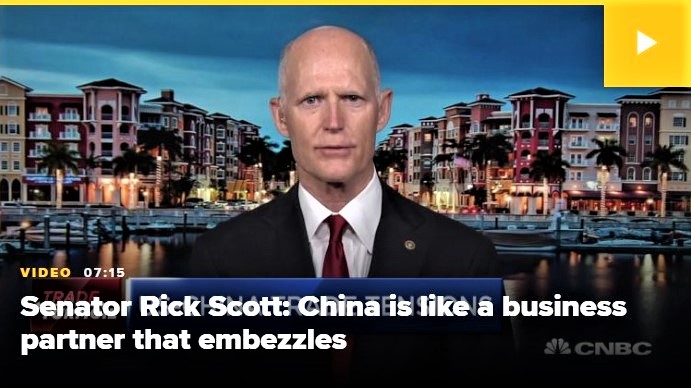 Everyone except trade warrior Donald J. Trump views tariffs as taxes on consumers.

To offset tariffs' added costs to U.S. buyers, one Republican lawmaker is calling for a corresponding tax cut.

"Anything we raise in tariffs we ought to give back to the public in tax reductions so that it doesn't impact American families," Sen. Rick Scott of Florida said Monday (Aug. 12) during an appearance on CNBC's Squawk Box.

Trade war justification: Despite his assessment of tariffs as taxes that deserved offsetting tax legislation, Scott maintained his support of Trump's actions.

"We've got to keep going down this path," he said. "It's the only change to get China to open up its markets."

He did hedge a bit, however, on whether the United States would have been better offer off by including allies and negotiating a new multilateral deal with China instead of the bilateral approach preferred by the Trump Administration.

Scott said having allies in a trade fight such as the one against Chinese exports always helps. However, he added, "China's like a business partner that embezzles. they break all the rules."

"We've pacified China for decades. We've sat here and acted like they are a partner and we watched them take advantage of it," Scott said. "I don't know what else the president can do other than the tariffs that he's doing. This is not a group you can negotiate with."

Economic struggles effect: A marked slowdown of the U.S. economy, however, could change things.

On Sunday (Aug. 11), Goldman Sachs decreased its fourth quarter growth estimates from 2.0 percent to 1.8 percent. The primary reason for the global investment and financial services company's pessimism is the escalating trade war with China.

The Goldman analysts said they expect President Donald Trump to carry out his threat to impose 10 percent tariffs on an additional $300 billion in Chinese exports starting Sept. 1.

The current tariffs and possible additions are having a greater effect on the U.S. economy than expected, increasing the risk of a recession.

The move was widely seen as an attempt to prevent holiday shopping price increases, as well as stop the drag the planned tariffs were having on stock prices. That latter goal did work, as stocks recovered most of Aug. 12's losses.

The tariff-reprieved items include, among other things, smartphones, laptops, toys and video games, which would have faced a 10 percent tariff next month. Still on the Sept. 1 tariff schedule are some apparel and foot ware, as well as tools, some food items (ranging from peanuts to cheese and meats) and assorted sporting goods.

Stimulus vs. deficit: If that does happen, a proposal's like Scott's tax breaks for tariffs might come into play. After all, governments have a history of providing tax cuts as a form of economic stimulus.

When the housing bubble burst and kicked off the Great Recession of 2008, President Barrack Obama Administration's pushed through the American Recovery and Reinvestment Act in 2009, which also included rebates.

Even states have used stimulus and rebate tools.

So if the economy does stall in 2020, some stimulus plan is not out of the question. It is, after all, also an election year. Politicians find that kind of timing almost irresistible.

But any new tax cuts beyond those implemented in late 2017 under the Tax Cuts and Jobs Act (TCJA) are problematic because of that tax law's effects.

The federal deficit has ballooned, in large part, due to the TCJA. The White House itself projects the deficit will hit $1 trillion this year.

That deep of a federal fiscal hole will make many members of Congress reluctant to engage in discretionary stimulus programs to boost the economy.

End the trade war now: At least one analyst took advantage of Scott's proposal to take the entire Trump trade war to task.

Tim Worstall, a senior fellow at the London-based Adam Smith Institute, a neoliberal think tank, had some thoughts on Scott's excellent, wondrous, brilliant and clever (his descriptors) tax proposal.

It accidentally reveals everything wrong with Trump's trade war, said Worstall in the Washington Examiner.

"The tariffs are costing us all money: in lower living standards because imports cost more, then again because the whole trade war is a net revenue loser, and so, Scott would, possibly unknowingly, have us cough up even more," wrote Worstall.

"So we should embrace Scott’s brilliant idea, calculate the costs, and reconsider the entire trade war to begin with," he added.