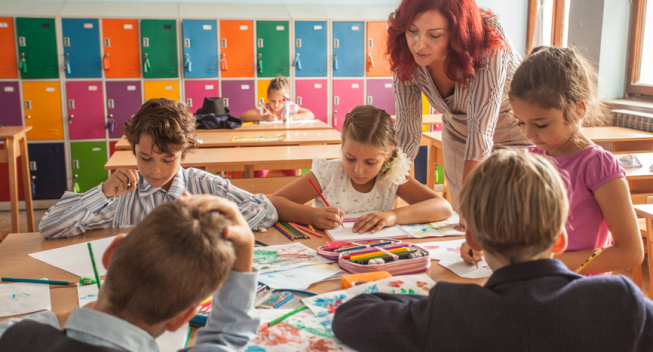 Classes are back in session in many communities across the United States. And part of the supplies that are being used to help educate our youngsters were paid for by their teachers.

Every year, studies by both private groups and federal agencies report that most public school teacher pay for products they need to get their lessons across to the students.

The amounts vary, ranging from nearly $500 in a U.S. Department of Education survey from several years ago to nearly twice that (or more) in some of today's classroom situations.

Easy to claim: The good news for these dedicated teachers is that they can claim some of those expenses on their tax returns. Even better, they can do so without itemizing, claiming the classroom costs as an above-the-line deduction on their annual form 1040.

A single filing teacher can claim $250 spent toward classroom supplies. For married educators, their joint filing allows for $500 in personal payment of school supplies to be deducted or, as it's officially counted on the return, subtracted from filers' gross income to get to a lower adjusted gross income (AGI) amount.

The deduction amounts are adjusted annually for inflation. It wasn't enough to kick up the amount for 2019, so it's still at $250 or $500.

But not big enough: However, even with inflation, the harsh fiscal and tax reality for teachers is that most of them shell out more to help enhance their students' learning experiences than they can claim on their taxes.

Plus, the Tax Cuts and Jobs Act (TCJA) did away with one way that teachers had to claim the excess.

Before the new tax law took effect, teachers who itemized had the option to claim any classroom expenses that exceed the $250 (or $500) amount by claiming the costs as an employee business expense. It the school-related costs and other eligible miscellaneous expenses exceeded 2 percent of their AGI, it provided an additional Schedule A claim amount.

Under the TCJA, however, itemized employee business expenses are gone.

That part of why some members of Congress are calling for an increase in the teachers' expenses tax deduction.

H.R. 878 as it's officially known would double the current $250 allowable claim for a single filer to cover certain elementary and secondary school out-of-pocket expenses. The new level still would be indexed for inflation.

Brown's bill is identical to one he introduced in previous Congressional sessions.

Doubling and expanding the teacher tax break: Then this month, just as classes were getting ready to start, two Missouri Representatives, Republican Sam Graves and Democrat William Lacy Clay, introduced their own teachers' deduction bill.

H.R. 4180, dubbed the Teacher Tax Deduction Enhancement Act of 2019, also would increase the annual limit on the expenses that a single taxpaying teacher may deduct from $250 to $500. It, too, would require the limit to be adjusted for inflation after 2019.

Reps. Graves and Clay also would expand the tax break to more educators.

H.R. 4180 would make a $250 deduction available to part-time teachers and preschool teachers in state-recognized schools.

Extenders are best passage bet: It's unlikely that either of these bills will pass on their own. But, and admittedly it's a bit but right now (insert your own 12-year-old double entendre joke here), they could be added to any tax extenders legislation.

The extenders, those technically temporary tax breaks that must be periodically renewed, are stalled for the moment.

However, there's been some movement on the Senate side, where the Senate Finance Committee last week released three extenders tax force reports (more on these in an upcoming post).

If the extenders are finally put on a fast track, look for Brown, Graves and Clay to try to hop aboard with their teacher tax breaks.