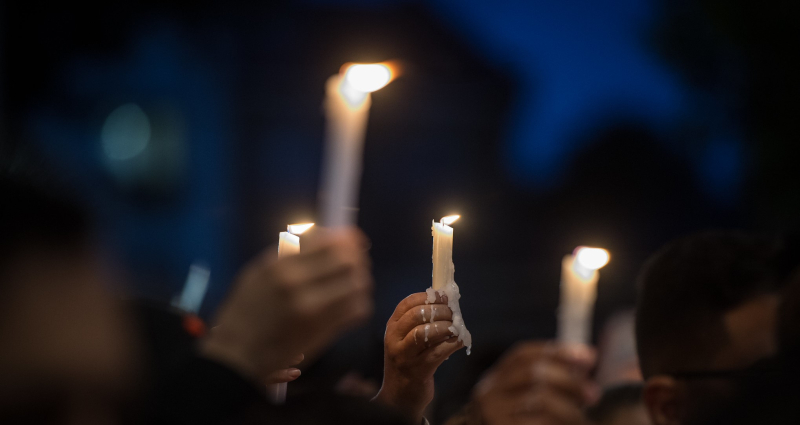 After the vigils for victims of mass tragedies, efforts to help the victims and survivors appear. Make sure your gifts to such campaigns, especially online crowdfunding ones, go to those who need help and not scammers. (Photo by Catholic Church of England, Mazur/CatholicNewsUK via Flickr CC)

In an eight-day span, three separate shootings by lone gunmen in these cities left a total of 35 people dead, 54 injured.

Residents in these cities are dealing with unspeakable horror and grief. Most of the rest of us in the United States and across the world cannot begin to imagine how affected family and friends are coping.

But many of us want, in some way, to help.

Unfortunately, creeps want to take advantage of our compassionate tendencies.

Help for affected families: The harsh truism that life goes on applies to all those dealing with the personal tragedies in California, Texas and Ohio.

In addition to working through their personal losses, families of those who were murdered also face practical challenges. Bills must be paid. Plans for a dramatically altered future must be made.

Each of the communities has established programs to help.

Those of us who aren't nearby also are reaching out, in most cases contributing to groups set up to offer solace and help.

That's great, but only if the groups purporting to assist shooting victims and their families are legitimate.

Sadly, crooks take advantage of terrible situations, especially those events that generate a lot of publicity like the recent mass shootings.

You can be sure that scum already out in each of these cities collecting money they falsely contend will help the families pay medical and other costs.

Crowdfunding efforts likely to appear: One of the most popular ways to help nowadays is through crowdfunding.

These internet sites pop up every day for myriad causes, offering donors a chance to give directly to those in need, cutting out the middleman of a typical charitable organization, although note that crowdfunding websites typically take a portion of the donations.

That's fine if that's your preferred method of giving.

But make sure the funds really go to the needy family or victims, not into the pockets of crooks who created a false fundraising site.

Crooks get creative in crafting crowdfunding scams. Here are xx things to look for to ensure your gift to one of these campaigns goes to those who need the help.

1. Know the organizer.
Consumer Reports (CR) suggests that, where feasible, you donate to people you already know and trust.

Since that's not possible for folks living outside the areas where the tragedies occurred, be patient. CR suggests you not be the first or one of the first to donate. Wait until a few others have donated, and read the comments that are left to see if anything suspicious pops up.

2. Note who's in charge.
Look at who's running the campaign. This is especially important if you're giving from afar and don't personally know any of those involved, either the intended recipients of the gifts of those who've set up the campaign.

CR says consider giving to campaigns run by third parties rather than to ones set up by the folks who need or are requesting the financial help. A third-party administrator offers an extra layer of oversight.

3. Surf social media.
Check the social media presence of the campaign administrator, be it a third-party or someone closer to the beneficiaries.

MarketWatch suggests you Google the name of the recipient in conjunction with the words complaint, review, rating or scam to see if anything appears.

Still, caveat donor. While the hosting sites say they check out campaign organizers, the fine print also in many cases says you're essentially giving at your own risk.

5. Count the dollars.
If a campaign has reached its stated goal, consider donating elsewhere. When a crowdfunding campaign takes in more that its stated goal, there's no guarantee of where the excess money will go.

"If you're using Chrome, just right click the main photo on the GoFundMe page and select 'Search Google for image,'" suggests the website. "If you see a ton of results, scammers probably stole that photo to use for their fake campaign."

Tax implications of donations: Most of us give to causes because we want to help. However, if you still itemize, your philanthropic gifts could be tax deductible.

The key factor here is that you give to an Internal Revenue Service-qualified charity. That means the group has applied to and been approved by the IRS for nonprofit tax status.

Such groups usually are referred to as a 501(c)(3) organizations in a nod to the Internal Revenue Code section under which they are authorized.

Crowdfunding gifts, however, do not fall into the tax-deductible category.

When donations aren't deductible: The tax code specifically disallows a tax deduction for gifts to individuals. That's typically the folks for whom crowdfunding campaigns are designed.

It doesn't matter how much your gift to a legitimate needy individual helps.

It also doesn't matter how valid, trustworthy and worthwhile the needy person/family is or the effort for them is.

IRS Publication 526 spells out the limits for contributions you cannot deduct at all and others for which you can deduct only in part.

You can't deduct as a charitable contribution:

Let me repeat/paraphrase one of the key IRS' guidelines in Pub. 526: Even if you give to individuals who are needy or worthy, your gift is not tax deductible.

Similarly, you don't get a deduction even if your contribution is made to a qualified organization, but is designated for the benefit of a specific person.

Tax break or not, give wisely: Again, the tax component is not the main driver in most cases where folks give. They — you! — do out of the goodness of your heart and in a sincere desire to simply help in any way and as much as you can.

Good for you! Here are some suggestions on what you can do to help victims in Gilroy, El Paso and Dayton.

By being careful and compassionate and careful, you can make sure your gifts, deductible or not, go to those who need them instead of into the hands of crooks trying to exploit horrific situations.