How to get the $500 tax credit for other dependents 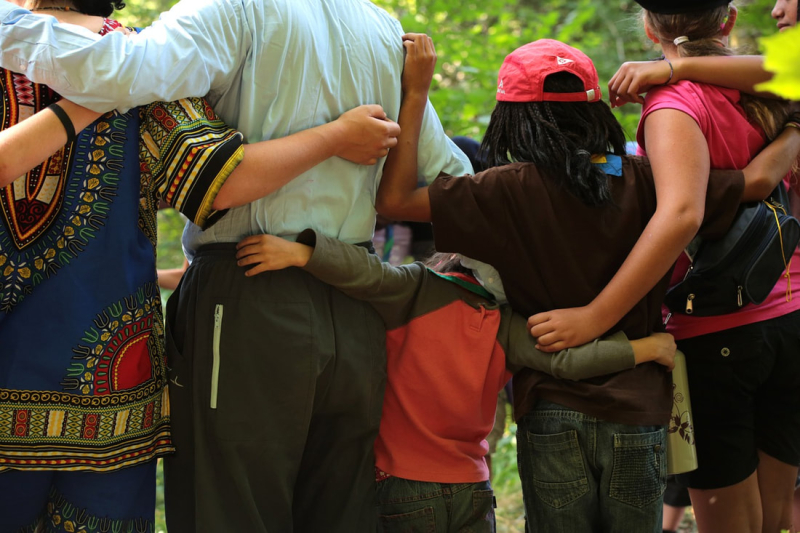 A new tax credit for dependents offers a break for extended family members and even non-relatives.

My mom is a fiercely independent octogenarian, but she still depends on me. Like today, when I'm taking her to have some dental surgery.

She is not, however, a tax dependent.

That means the hubby and I can't claim her on our tax returns in order to get the $500 Credit for Other Dependents.

This tax break, newly-created by the Tax Cuts and Jobs Act (TJCA), also has been dubbed the Family Tax Credit or Non-Child Tax Credit. It's an add-on to the Child Tax Credit and, in the grand scheme of tax reform, was designed to partially replace exemptions that were eliminated by the new tax law.

As credits, the break for dependent children and the new one for other folks who literally depend on you each provide a direct dollar-for-dollar reduction of any taxes you owe.

Dependents who aren't your kids: The Credit for Other Dependents, whose name the Internal Revenue Service has flipped in its official ODC acronym, is in effect, like all individual tax provisions of the TCJA, through the 2025 tax year unless Congress and whoever's in the White House then decide to extend it.

The ODC gives eligible taxpayers the option to claim a $500 per person tax break in connection with certain folks who depend on them, but who don't qualify for the Child Tax Credit.

Qualifying relatives and unrelated dependents: Note that last group of potential tax dependents, the adults you can claim in connection with the ODC.

Adult dependents for many folks will be actual relatives. However, it's not limited to formal family members.

1. He or she is not your qualifying child.
A child cannot be your qualifying relative for ODC purposes if the child meets the dependent child requirements for the Child Tax Credit (CTC). Those are detailed in my post on the 5 tests a child must meet to be your tax dependent.

For most families, that's not an issue since when it's available, they'll want to claim the substantially larger CTC for qualifying children. It's worth $2,000 per child, double what it was before the TCJA took effect.

In addition, a base amount of $1,400, which will be adjusted for inflation, is refundable as the new Additional Child Tax Credit.

Refundable means just what is says. You get money back as a refund if there is some of the credit left after offsetting any due taxes. 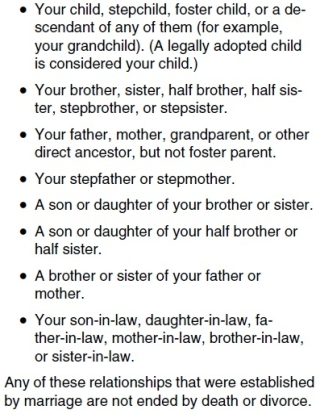 Let's look first at the with the relationship test since the IRS spells out who qualifies here. It is a person or any age who is related to you in a variety of ways noted in the box to the right (click image for a larger view).

If, however, the person is not an actual relative, he or she could qualify as one for tax purposes if she or he lived with you for the whole year. Yes, all 365 days (or 366 in a Leap Year). And yes, that means you might be able to claim that lay-about boyfriend that you still haven't broken up with. (Non-tax piece of advice, consider making this year the one in which you send him packing.)

3. She or he must meet the gross income test.
What the IRS is looking for here is how much money the potential dependent made. For the 2018 tax year, the person's earnings could not exceed $4,150. The amount was bumped up a tad to $4,200 for the 2019 tax year.

So that deadbeat boyfriend (yes, I'm still picking on him; see my previous relationship advice) who can't even hold a temp job clears this hurdle.

That's one of the ways that my mom keeps us from claiming her as a dependent. She insists on paying for as much of her expenses as she can, even today's dental work, herself. We just pitch on things she thinks are too frivolous or expensive, but which she enjoys, like the expanded cable tier that gives her the Golf Channel in high definition.

Other dependent issues: In addition to meeting the four tests above, there are a couple of other qualifying relative/dependent things to note.

There is no age test. The ODC person can be any age. However, the person must be a U.S. citizen, U.S. national or U.S. resident alien.

You can find more details and examples in IRS Publication 501 or by using the IRS' online interactive assistant.

Other dollar limits, too: While the $500-per-person credit certainly is welcome by many filers, there is a limit.

It is a nonrefundable credit, meaning that if it's larger than any tax you owe, it will offset your tax bill but you can't get the excess credit as a refund.

The Credit for Other Dependents also has income limits on those who claim it.

Per my lst two comments/inquiries>

How many of the most popular tax preparation softwares for filing taxes are up to date on nuances of the latest the guidelines.? What does one do if they aren't??

1) Per my previous post, the IRS assistant also denied me as Head of Household for 2018 and inferred that I was 'single' based on not being direct blood relation of my then girlfriend. Is the tool correct or they just haven't updated it to include the Treasury's and IRS's later interpretation? Or am I clear out of luck even before the question of citizenship/non-resident alien filter?

I'm an ex-pat US citizen living in Mexico since dec 2014.

I have lived with my Mexican citizen girlfriend for 3 years and I pay all household and other expenses. She has income of approx $1000 US per year. (She has no claim to US citizenship or US non-resident alienship.). We married in Feb of this year after awaiting delayed divorce hearings, so in 2019 she will be filing jointly with me and we shall get her a ITIN.

However, for year 2018, can she be a dependent on my US taxes per the broader definition of 'relation' as your site explains. The IRS website assistant still appear to disqualify her based on not being US citizen or non-resident alien. I notice that other 'dependent status definitions' appear to add 'or resident of Mexico or Canada' to the citizenship or non resident alien requirement. Is this no longer the case?