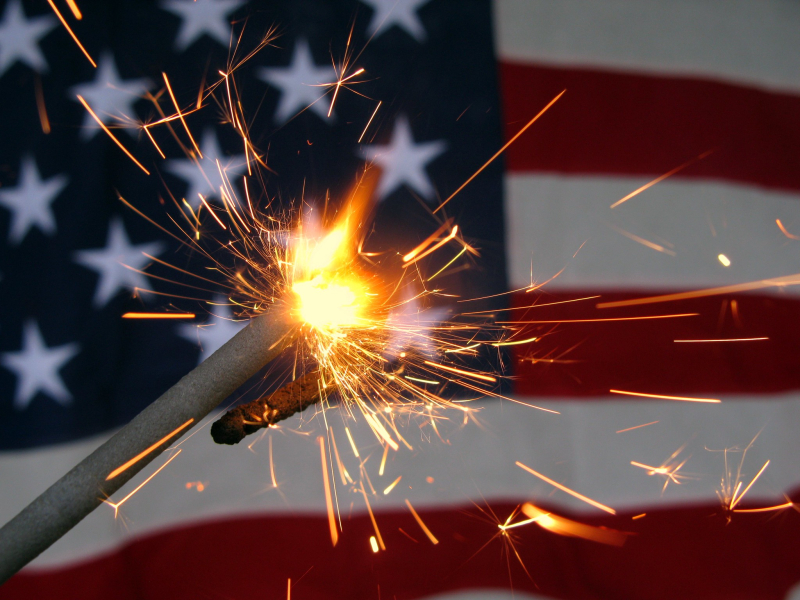 On July 4, 1776, the Declaration of Independence was adopted, marking the newly-formed America's official break from British colonial rule.

We all know that taxes and the original Tea Partiers were a major part of the creation of the United States.

But what is less well-known is why communities across the country tonight will celebrate the nation's birthday by setting of pyrotechnic displays.

Adams as early fireworks advocate: On July 3, 1776, a day after the Continental Congress in Philadelphia voted for independence (the declaration document itself was transposed on July 4, although it took weeks for all the delegates to sign it), Adams reflected on the historic step he and his rebellious colleagues had done.

The man who would become America's first vice president and its second president put quill to paper to let his wife Abigail, who was at their Boston home, know what had just transpired and how he hoped it would be recognized annually by future Americans:

"I am apt to believe that it will be celebrated, by succeeding Generations, as the great anniversary Festival. It ought to be commemorated, as the Day of Deliverance by solemn Acts of Devotion to God Almighty. It ought to be solemnized with Pomp and Parade, with Shews, Games, Sports, Guns, Bells, Bonfires and Illuminations from one End of this Continent to the other from this Time forward forever more." 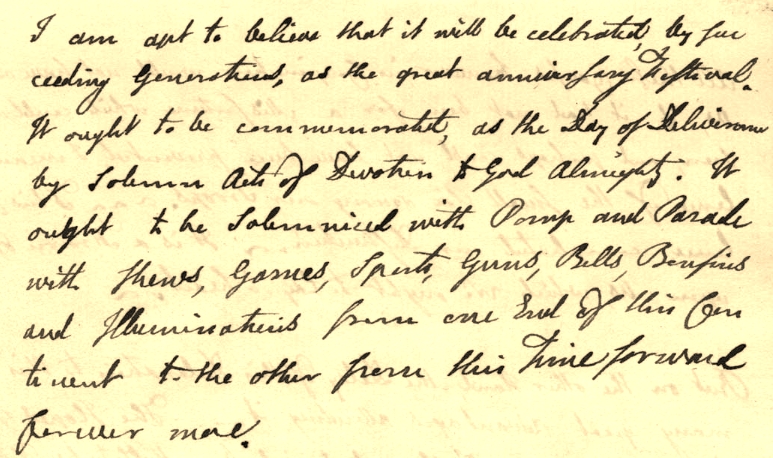 First fireworks in 1777: As Adams wished, the first commemorative Independence Day fireworks were set off on July 4, 1777, in the then-national-capital of Philadelphia.

The Pennsylvania Evening Post reported that "the evening was closed with the ring of bells, and at night there was a grand exhibition of fireworks (which began and concluded with thirteen rockets) on the Commons, and the city was beautifully illuminated."

Fireworks also lit up the 1777 skies in Boston and presumably, per Adams' wishes, in other cities and towns to celebrate America's first birthday.

To what I presume is Adams continuing delight as he watches from somewhere in the great beyond, we will again ignite fireworks tonight across the United States in celebration of our country's 243rd birthday.

Taxation prompted revolutionary fireworks: As noted earlier, our forebears hurled boxes of tea into Boston Harbor because of their frustration with taxes collected sans proper representation.

Many, many years later, one of my fellow Texans famously noted that Americans basically don't like paying taxes to Uncle Sam any more than they did to King George III.

But taxes are necessary, as Supreme Court Justice Oliver Wendell Holmes famously noted, to pay for a civilized society.

You can read more famous quotes about taxes in a story (OK, it's a slide show; sorry) that I wrote a few years ago (and in the synopsis of it in an earlier Fourth of July blog post).

Some of the quotes are funny, others insightful, but all are thought-provoking glimpses of how we U.S. residents have viewed taxes in general and our tax system in particular through the years.

Check it out and impress family and friends by reciting your favorite tax quote at your Independence Day gathering today.