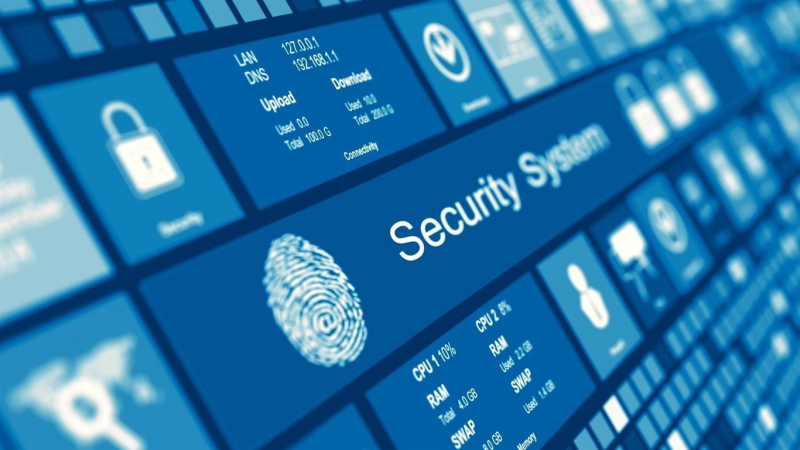 The Internal Revenue Service and its Security Summit partners this summer launched a campaign to encourage tax professionals to review and upgrade their security systems.

But it looks like the IRS also needs to do some work, according to a recent Government Accountability Office (GAO) report.

IRS online option breach spurs inquiries: The GAO has been conducting audits on how the IRS manages its security since the agency sustained a data breach in 2015 of its Get Transcript online service.

That attempt by hackers exposed the data of around 104,000 taxpayers to potential identity thieves. The service was offline for more than a year as the IRS investigated and subsequently enhanced its online security measures.

GAO also noted that the IRS had not addressed 127 IT security recommendations that the watchdog agency previously issued.

Unsecure access issues: A key area of concern is IRS access controls, such as authentication and encryption.

Eight of the latest 14 security shortfalls identified by GAO relate to access management. An additional four fall in the configuration management. The final two areas where the IRS needs work are related to segregation of duties and a contingency plan deficiency.

Specifically, GAO found that the IRS:

The table below from the GAO report provides the exact numbers of pending security issues. 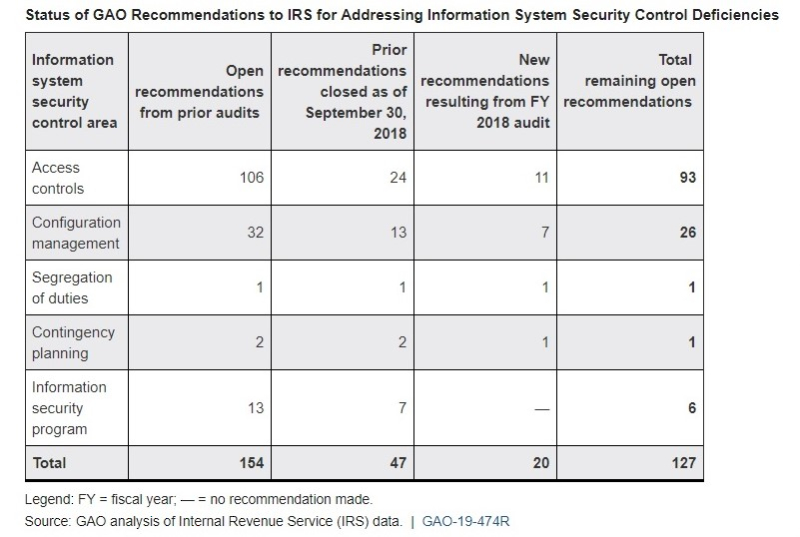 Many, but not serious, risks: While all those items are disturbing, the good news is that the GAO determined the deficiencies are not great risks.

"We identified ongoing and new information system security control deficiencies that while not collectively considered a material weakness, were important enough to merit attention by those charged with governance of IRS and therefore represented a significant deficiency in IRS’s internal control over its financial reporting systems," wrote GAO Director of Financial Management and Assurance Cheryl E. Clark and Managing Director of Applied Research and Methods Nancy R. Kingsbury in a letter to IRS Commissioner Charles P. Rettig.

However, when it comes to interactions with and safeguarding taxpayers' information, any shortfall is concerning and attention is needed.

Old issues still open, new ones added: And the GAO noted that despite some actions cited in the earlier report that still need attention, the IRS has taken considerable steps to address its prior recommendations and has agreed to fix mistakes and flaws within its internal systems.

While the IRS is working on those, the GAO also gave the tax agency a new set of 20 security recommendations to resolve the new issues.

Congressional support and money required: We — government oversight agencies, lawmakers and all of us taxpayers — cannot let the IRS off the hook for security oversights.

It is, after all, our personal and financial data that Uncle Sam's tax collector gathers and should keep as safe as possible.

But there are extenuating circumstances.

The IRS in recent years has been working under severely restricted budgets. Its efforts to upgrade equipment, software and systems, as well as to catch tax and other crooks, particularly in recent years, have been seriously hindered by budget cuts and investigator attrition.

The new Taxpayer First Act will help in the security area somewhat. Several of the IRS reform measure's provisions are designed to discover and stop tax ID theft.

Such efforts, however, as well as upgrades to technology and systems take money.

Let's hope that under the recently reached federal budget agreement, Congress also will allocate some of the new money to the IRS for it to adequately address these old and new security concerns.