Grassley makes a case for tax extenders, which were omitted from budget deal 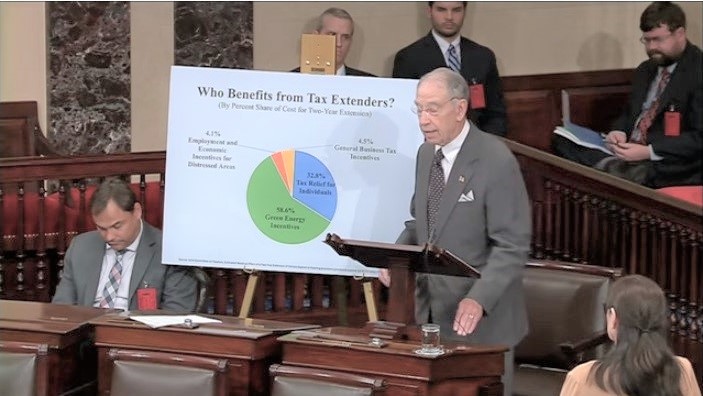 In remarks on the Senate Floor, Senate Finance Committee Chairman Chuck Grassley used visual aides to illustrate all the sectors of the U.S. economy he says benefit from the expired tax breaks known as extenders. Click image to watch Grassley's full comments via YouTube.

Many Congressional actions often are viewed as cartoonish, but the Senate's leading tax writer actually invoked a classic Sunday funnies image to describe the current status of more than two dozen tax breaks.

"I remain committed to acting as soon as possible so taxpayers who have relied on these provisions in 2018 don’t end up feeling like Charlie Brown after Lucy pulls the football away," said Sen. Charles Grassley (R-Iowa), chairman of the Senate Finance Committee, in remarks July 24 from the Senate floor.

The veteran lawmaker felt compelled to use that venue and Charlie Brown's perpetual frustration to express his dismay that the expired tax breaks known as extenders weren't included in the recently reached federal budget deal, which passed the House today, July 25.

The groups of tax benefits get their name because they technically are temporary and must be periodically renewed to remain in the Internal Revenue Code. Around two dozen such tax breaks ended with the 2017 tax year. A handful were renewed retroactively for just 2018 and then evaporated again.

Extenders pro and con: Opponents of the tax breaks say the on-again, off-again nature is bad tax policy. If they can't be made permanent, they should simply end once and for all.

Others want the costs of the temporary tax breaks to be considered, saying offsets — either spending cuts or tax increases depending on political position — should be required for renewal of any extenders.

Grassley, however, remains a traditionalist when it comes to extenders.

"For decades, Congress has routinely acted on a bipartisan basis to extend a number of expired or expiring provisions," he said in his remarks. "Typically, their extension would be included as part of a larger spending package or budget deal at the end of the year."

That, however, hasn't yet happened and it's not clear when, or if, it will.

Grassley and his Democratic counterpart on the Senate Finance Committee, Sen. Ron Wyden (D-Oregon), have introduced legislation to restore the currently dead tax provisions retroactively and through 2019.

The Finance Committee pair followed up that effort by creating bipartisan task forces to examine 42 temporary tax provisions that expired, or will expire, between Dec. 31, 2017 and the end of this year.

House less united across the aisle: Grassley is dismayed that there's no similar bipartisan extenders effort in the House.

In fact, the Senate's top tax writer blames Democrats for failing to include extenders in the budget bill that must be dealt with by the end of the fiscal year to avoid another costly federal government shutdown and ensure that Uncle Sam doesn't default his growing debt.

"While I understand reaching an agreement was important to ensure the full faith and credit of the United States, I am disappointed the final agreement does not address a subject that has been causing heart-ache for millions of taxpayers for at least the past six months," said Grassley.

"It seems as though the House Democrats are unaware of the historic bipartisan nature of tax extenders or how these provisions even apply to taxpayers, industries, and the economy," Grassley said.

More than big business tax relief: Grassley also accused extenders opponents of not realizing the breadth of taxpayers who benefit from the expired tax breaks.

But Grassley contends that extenders "provide answers for the millions of taxpayers — both individuals and businesses — who are waiting on Congress so they can finalize their 2018 taxes and, in some cases, even stay in business."

"In fact, the overwhelming majority of the tax extenders either benefit individuals and families directly, or they benefit our communities by giving a boost to local businesses that many people directly rely on for jobs and to support their local economies," argued the Finance Committee chairman.

Room for permanence: Grassley also indicated that he would support, based on the task force findings he expects to see by the end of this week, some permanent tax solutions for extender breaks.

And while Grassley did not expressly say so in his floor comments, tax observers say that could include the possible phasing out of some extenders.

"This is important so we can stop the annual exercise of kicking the can down the road,” Grassley said.

As well as stop pulling the tax break football out from under taxpayers.

Grassley's Peanuts' comparison was made on the floor
of an institution that sometimes is denounced as a peanut gallery.