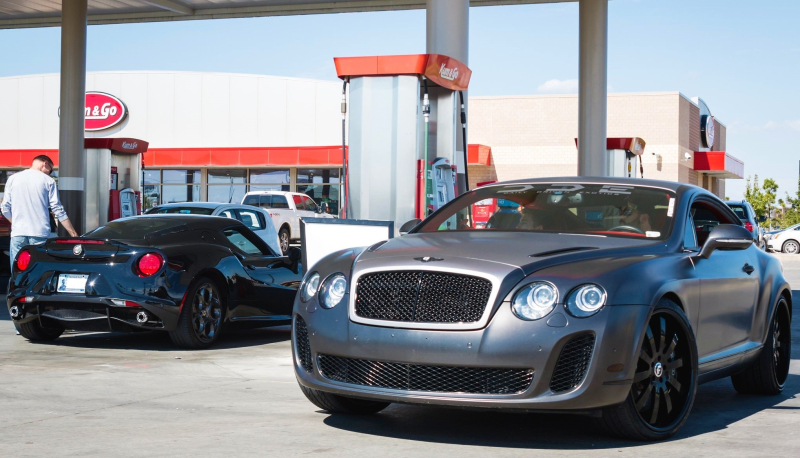 Filling up photo by Jackson Lavarnway via Flickr CC

If you're reading this, you're probably already clock watching. The Fourth of July holiday is less than two days away and, if you've got an accommodating boss, you'll get a nice long weekend.

But until then, you're at your desk.

When you do finally take off for your July 4th celebrations, you'll likely hit the road.

That means you have two concerns. First, how bad will traffic be? Second, what will it cost me to fill up my tank?

Spoiler alert, traffic will be crazy.

Spoiler alert redux, motorists who live in or are heading to 14 states will pay more for fueling up thanks to tax increases that took effect July 1.

For the 41.4 million Americans traveling by automobile this Independence Day holiday week, there's some mostly, but not all, good news.

The national average on July 1 for a gallon of unleaded gas was $2.71. That's a nickel more than the previous week, but 11 cents less than in May and 14 cents cheaper than a year ago, according to AAA gas price expert Jeanette Casselano.

And it's something drivers should get used to as the summer vacation season progresses.

"It's typical to see increases at the pump ahead of the holiday, but we may see prices continue to jump throughout the month due to refinery interruptions on the East Coast, increasing demand and fluctuations in crude oil price," added Casselano.

Higher taxes in some states: The fuel price news will be compounded in a handful of states where excise taxes where hiked just as folks were finalizing their July 4th travel plans.

Drivers in California, Connecticut, Illinois, Indiana, Maryland, Michigan, Montana, Nebraska, Ohio, Rhode Island, South Carolina, Tennessee, Vermont and along one major highway in Virginia will pay more for fuel, primarily gasoline, due to tax increases that took effect on July 1, the start of their fiscal years.

Some were already in the works as phased-in incremental fuel tax hikes. Others are new, large bumps in the fuels' prices. And a few apply to vehicles that run on diesel instead of gasoline.

Here's the scoop on the 14 higher state fuel taxes that kicked in this week.

California: The Golden State is the leader in many ways, but motorists there will not welcome this (dis)honor. Californians now pay the highest taxes on gasoline, passing Pennsylvania, which left its rate untouched. California's gas tax rose 5.6 cents a gallon, about a 10 percent increase. The gas tax now stands at 47.3 cents per gallon (cpg). It will continue to increase indefinitely starting next year to keep up with the California Consumer Price Index. The only consolation for those West Coast drivers is that the added tax money, which is split between state and local governments, is expected to generate $50 billion for repairs to roads and infrastructure, as well as some going to public transportation and biking and walking trails.

Illinois: Illinois motorists saw the biggest of any drivers across the country. The Prairie State's gas tax was doubled, jumping 19 cents a gallon to the new 38 cpg rate. The diesel tax rate also went up to 24 cents. The fuel tax legislation enacted earlier this year also indexes the gas tax rate so that it will reflect small, periodic increases in the coming years. In addition to the state-level gas tax hike, the new law allows several local taxing jurisdictions (the city of Chicago and Lake, Will, DuPage, Kane and McHenry counties) to increase their local gas taxes by various amounts.

Indiana: Hoosiers now pay 0.5 cents per gall more for gasoline and a penny more per gallon for diesel fuel. Both these fuel tax hikes come as part of a 2015 bill that calls for them to be updated annually to keep pace with inflation and the rate of personal income growth in Indiana. The gasoline tax is also partly linked to gas prices, which have fallen in Indiana and explain why the gas tax rate hike is less than that on diesel.

Maryland: Legislation enacted in 2013 meant that gas and diesel taxes in the Old Line State went up 1.4 cpg each on July 1 based on inflation and the price of motor fuel in Maryland.

Michigan: The Great Lakes State's gas tax went up 0.1 cpg and the one on diesel increased by 0.2 cpg on July 1. Currently, Michigan's gas and diesel tax rates vary each month based on fuel prices, but state lawmakers are expected by 2022 to join other states that index fuel taxes to inflation.

Montana: A phased-in fuel tax increase enacted in 2017 pushed the Treasure State gas tax up by 0.5 cents and diesel taxes up by 0.2 cents. The full fuel tax increases will total 6 cpg for gas and 2 cpg for diesel when it's completed in July 2022.

Nebraska: Both gas and diesel tax rates in the Cornhusker State went up by 0.1 cents. The increase is calculated using a formula that takes into account fuel prices and the legislature's spending choices for infrastructure.

Ohio: The Buckeye State comes in second in the 2019 fuel tax hike parade. Ohio drivers now are paying state taxes of 38.6 cents a gallon, an increase of 10.5 cents from the previous gas tax. The state's diesel fuel tax also increased by 19 cents per gallon. Both fuel tax hikes are due to Ohio's transportation budget that was signed into law in April. The added money, a projected extra $865 million a year, is slated to go toward road and bridge maintenance.

Rhode Island: Gas and diesel tax rates in the Ocean States went up by 0.1 cents. The hike is due to a 2014 law that allows for indexing of the fuel tax rates every two years.

South Carolina: The Palmetto State's gas tax rose another 2 cents per gallon this week, bringing the total tax paid at the pump to nearly 23 cents a gallon. It's the latest step in South Carolina's rolling implementation of a 12-cent gas-tax hike approved in 2017. Drivers now are paying 6 cents per gallon more in taxes than before the law took effect and over the last two years have paid a combined $198 million more for gas. The S.C. gas tax will rise another six cents over the next three years.

Tennessee: Volunteer State drivers get no choice at the pump. They now are paying 1 cpg more in tax on gas tax and 3 cpg more on diesel thanks to those fuel tax hikes that kicked in earlier this week. Both hikes are the final part of phased-in fuel tax increases that began in 2017 and have now raised gas taxes by 6 cents and diesel taxes by 10 cents overall.

Vermont: The Green Mountain State's gas tax went up by 0.55 cpg. The hike due to the increase in gasoline prices in the state, which have increased.

Virginia: If you have options as to which road you plan to take across The Old Dominion, you could save some fuel tax money. Virginia raised the gas tax only online I-81, which runs north-south across the western portion of the state. The dedicated sales tax increase along the road from Bristol to Winchester is 7.6 cents per gallon of gasoline and 7.7 cents per gallon of diesel will be collected by the merchants selling the fuel. The expected $2 billion from the tax will be used for improvements along the 325-mile corridor

Remember, too, that all state gas taxes are tacked onto the federal 18.4 cpg gasoline tax. That rate has not changed since 1993, despite indications from the Trump Administration that it would support a national fuel tax hike.

Holiday travel congestion: OK, you've got your fuel budget set. Now it's time to head out on the highway, but maybe not when or at the pace you planned.

The more than 41 million Americans traveling by automobile this July 4 holiday are the most on record for the holiday and a 4.3 percent increase over last year, according to AAA.

So it's not surprising that the motorist organization and INRIX, a global mobility analytics company, warns drivers that they could face delays this week as much as four times a normal commute, especially in major metropolitan areas.

Tomorrow, Wednesday, July 3, is expected to be the worst day on the roads as Independence Day travelers mix with regular commuters.

And make sure you top off your tank before you hit the road, especially if you're heading into one of the states that just hiked their fuel taxes.

Am really against oil taxes increase because it happens in all countries and destabilizes citizens way of life. It’s uncalled for and something they should reconsider. Let the governments have a clear policy on how to regulate the oil prices.