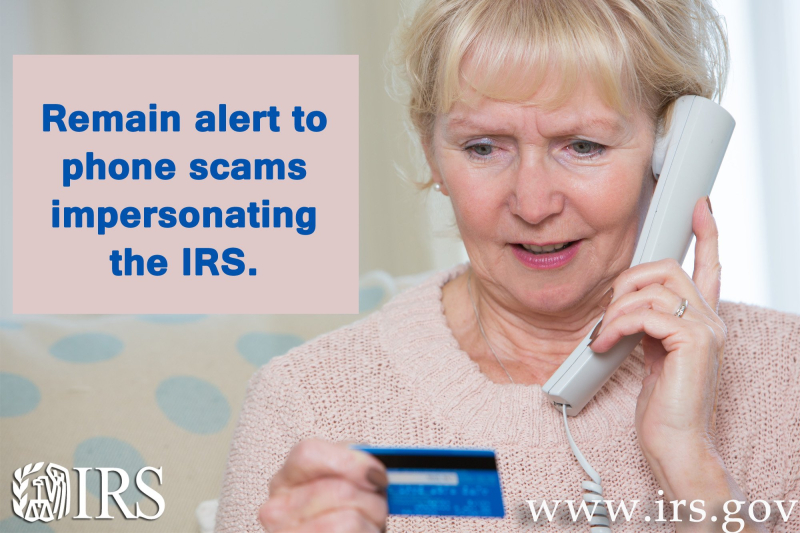 My mother is almost 85. She's no Betty White, but all things considered she doing darn well. Especially when it comes to cognition and attitude.

She listens to an audio book a week, keeps up with the news and her favorite TV game show (Jeopardy) and doesn't take any guff from unsolicited callers trying to sell her stuff. Or worse.

Unfortunately, that latter instance is not the case for many in my mom's demographic. A recent Marketplace series examined how the aging brain may become more susceptible to financial scams.

Among the findings, data suggest that as we get older, we become more vulnerable to fraud in so many of its forms.

Everyone's a possible scam victim: Here's another news flash that not news to many of us. Even those of us much younger or young at heart can fall prey to scammers.

That's why the Internal Revenue Service is alerting folks to two recent scams that have popped post tax season but which non incorporate a tax element as part of the ploy.

One involves Social Security numbers related to tax issues. The other threatens people with a tax bill from a fictional government agency.

Here are some details on these latest tax scams.

These fake SSA agents tell the potential scam victims that their Social Security numbers have been suspended because of suspicious activity or being involved in a crime.

In some calls, the scammer asks the victim to confirm his or her Social Security number (SSN) so that it can be reactivated.

Other times, the crook asks the person to send money or gift cards to keep their Social Security number or associated bank account safe.

The Social Security Administration also reported its own twist on this scam.

Now the Social Security scammers are using a tax element in their criminal calling.

The IRS says that in this latest version, the fake SSA agents mention overdue taxes in addition to threatening to cancel the person's government issued ID number.

As in the similar IRS agent impersonation scam, this Social Security version is just another attempt by con artists to frighten people into giving out their personal and financial info or get them to return robocall voicemails.

Again, be like my octogenarian mom — who looks like my sister in the selfie (not filtered; my phone had a scratch in the lens area) below! — and don't fall for it. Fake tax agency: The second scam now making the rounds involves the mailing of a letter threatening an IRS lien or levy.

The lien or levy is based on bogus delinquent taxes owed to the non-existent Bureau of Tax Enforcement.

There is no such agency, notes the IRS.

The lien notification scam also likely references the IRS to confuse potential victims into thinking the letter is from a legitimate organization.

Classic scam components: Both of these identity theft efforts display classic signs of being scams.

They try to appear official.

They invoke government agencies which play important roles in almost everyone's lives and which, in many cases, also cause folks to be a bit fearful.

They are insistent on and persistent about getting the personal and financial information from their victims.

If you get one of these or any other calls that don't seem quite right, the first thing to do is stop. The scammers want you to act in haste. Don't.

If you feel like you have to be polite (my mom would be pleased), tell them you'll get back to them … but don't!

Even better, be impolite (like me, sorry Mom!) and just hang up. And definitely don't call the number left on your voice mail.

If concerned, YOU make the real call: If you're really concerned there's been some security breach and your tax or Social Security data is being misused, contact the legitimate IRS and Social Security offices directly.

If there's a real problem, a real worker at these offices will be able to help you.

You can view your tax account information online at IRS.gov to see the actual amount owed. You also can call the IRS toll-free at (800) 829-1040.

Report scam attempts: Uncle Sam also wants to know about any attempts, successful or not, to scam you.

Report the caller ID and/or callback number to the IRS by sending it via email to phishing@irs.gov. Put "IRS Phone Scam" in the subject line.

If you receive a suspicious call from someone alleging to be from the Social Security Administration or it's Office of Inspector General (OIG), report that via the OIG's special online page. You also can call toll-free (800) 269-0271, Monday through Friday, 10 a.m. to 4 p.m. Eastern Time.

Stay vigilant: Most of all, remember that nowadays tax scams never seem to stop.

The IRS and its Security Summit partners — those are the state tax agencies and the tax industry working with Uncle Sam to fight tax ID theft — note that these latest two scams are showing up in the late spring and early summer as tax bills and refunds arrive.

But tax scams can show up year-round. So be alert 365 days of the year.

There are many text message scams like smishing attack are happening...we should aware of them