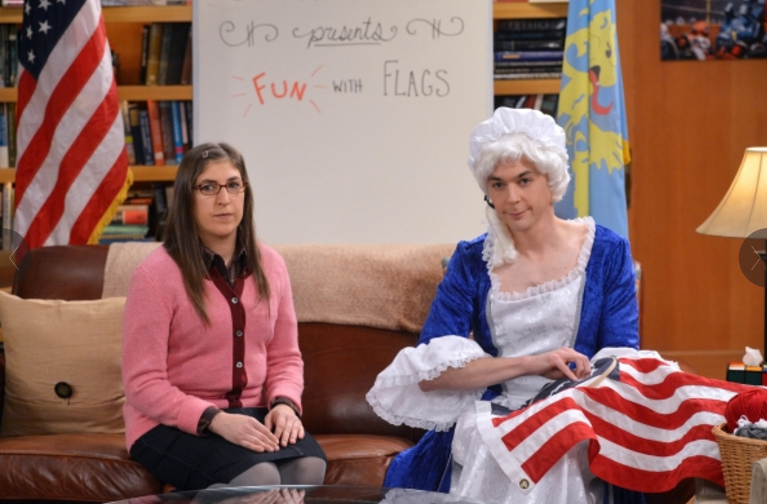 Among the flags celebrated on Fun With Flags, the online show within a show in CBS' The Big Bang Theory, was Old Glory. (Photo of Amy Farrah Fowler play by Mayim Bialik and Jim Parsons, who played Sheldon Cooper and Betsy Ross, courtesy Sheldon Cooper presents Fun With Flags Facebook page).

Long-time readers of the ol' blog already know that June 14 is an extra special day for me.

It was my younger brother's birthday. One of my fondest memories of him was when as a preschooler he thought all the U.S. flags were flying in his honor. We let him believe that until he was old enough to figure out the real reason.

I'm spending today with my mother. In addition to our usual errands, we'll spend time fondly remembering the son and brother we lost way too early.

So that I could get on the road to my Mom's early, I've shifted the usual Saturday Shout Out feature to Friday. But to keep some semblance of alliteration, today is conveniently and fittingly dubbed Flag Friday Focus.

And the focus is on Gail Cole's piece for Avalara from last Flag Day. In it, she takes a look at the various issues involved in how states do or don't collect sales taxes on Old Glory purchases.

Quite a few have chosen to not assess the sales taxes.

Specifically, writes Cole, sales of the following flags are always exempt in:

Check out Cole's story for some special considerations that affect collection of tax on flag sales, like whether the banner is sold solo or part of a display kit.

Also, the Avalara piece points out those states that exempt certain flags under specific conditions.

Regardless of whether you paid tax on your Stars and Stripes or bought the banner tax-free, fly it high and proud today.

I'm sure my brother is still enjoying the displays.