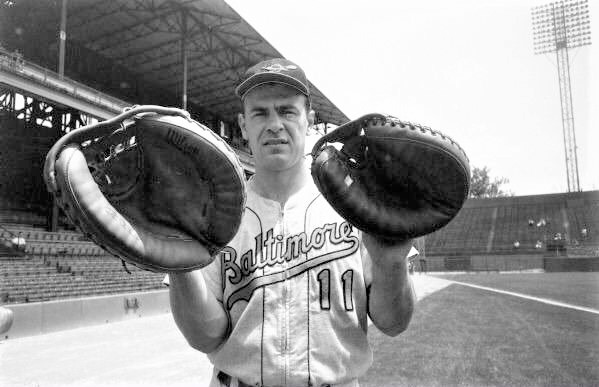 Backup withholding basically is the tax collector's knuckleball mitt. The over-sized baseball glove helps a catcher handle, he hopes, the hard to predict (and hold onto!) pitches. The IRS uses backup withholding to catch potentially errant income amounts. (Baltimore Orioles' Gus Triandos showed how the mitt at left, which he used when Hall of Fame knuckleballer Hoyt Wilhelm was on the mound, compared to his regular one. Photo courtesy Tom's Old Days via Twitter)

In most income earning instances, the Internal Revenue Service finds out how much we make and owe taxes on thanks to reports from those who pay us.

The most widespread third-party reporting, as this process is known, comes from employers who issue workers W-2 forms.

Another big batch comes from 1099 forms. These tax documents come in many versions, but most of us are quite familiar with the 1099-MISC for gig or freelance work, 1099-DIV for investment earnings and 1099-G for state tax refunds or unemployment benefits (yes, they're taxable).

Info the IRS does or doesn't get: Your W-2 shows how much you made and how much your company took out before you got your check to send to the IRS for income tax withholding or Social Security and Medicare, aka Federal Insurance Contributions Act (FICA), trust funds.

1099 forms, on the other hand, also have a box to show where any withholding was taken out, but in most of these cases that entry is blank.

The payer assumes, and usually notes in the contractor agreement your signed, that you are responsible for reporting and paying taxes on this money, both the income tax due and the appropriate self-employed FICA amounts.

Sometimes, though, in certain income situations you may need to have withholding taken from these payments. This is known in the tax world as backup withholding.

Here are 's some info on backup withholding and whether you need to have it withheld.

1. What is backup withholding? As the name indicates, it's a safety net for the tax collector.

It's a sort of financial backstop to ensure that this usually untaxed income doesn't slip through the tax system or tax collector's fingers.

In cases where backup withholding applies, it essentially is withholding. The payer must withhold tax from your payments that normally are not subject to withholding.

When you don't provide the necessary digits for the IRS to track you, it simply says, fine, we'll take the tax upfront via backup withholding.

If the IRS discovers your ID number is incorrect or doesn't match the name in the Social Security Administration records, that'll get you on the backup withholding list, too.

You also might be subject to backup withholding if in the past you didn't report on your federal income tax return any or under-reported some interest and dividend income you received.

Basically, the IRS thinks it can't trust you to let it know of more untaxed money you're getting.

This is a pretty stiff tax rate.

Under the Tax Cuts and Jobs Act (TCJA) tax brackets adjusted for inflation for the 2019 tax year, the 24 percent tax rate doesn't kick in until you make more than $84,200 if you're single or more than $168,400 if you're married and file a joint return.

So if your overall income is less than the 24 percent tax rate trigger, the backup withholding will be more than you need to pay.

You'll get any excess back when you do file a return, but in the meantime, you'll be short the cash you could have had in hand.

This covers, in general terms, freelance or contractor earnings, officially referred to by the IRS as nonemployee compensation, as well as money received as rent payments, royalties and investment earnings, including interest and dividends.

5. Are any payments not subject to backup withholding? Yes, there are a few.

And no, I don't know about the cash fish purchase off the top of my tax head. I am, however, pretty sure it doesn't apply to your evening at Red Lobster where you didn't use your credit-card.

If you didn't give the person or company paying you a Social Security or other taxpayer identification number, do so.

If you provided a wrong one, correct it.

If you didn't pay any or enough tax on earlier untaxed earnings, resolve that situation. Now.

Once you take the appropriate step(s), the backup withholding can be stopped.

It should be in usually unused withholding box on the 1099 form(s) you receive early in the next tax year.

Where the backup withholding was more than your eventual tax bill, you'll get the overwithheld amount as a refund.

But again, it's better to have your money throughout the year and correctly pay the accurate amount of tax due through estimated tax filings.

More detailed information on backup withholding can be found in IRS Publication 1281.