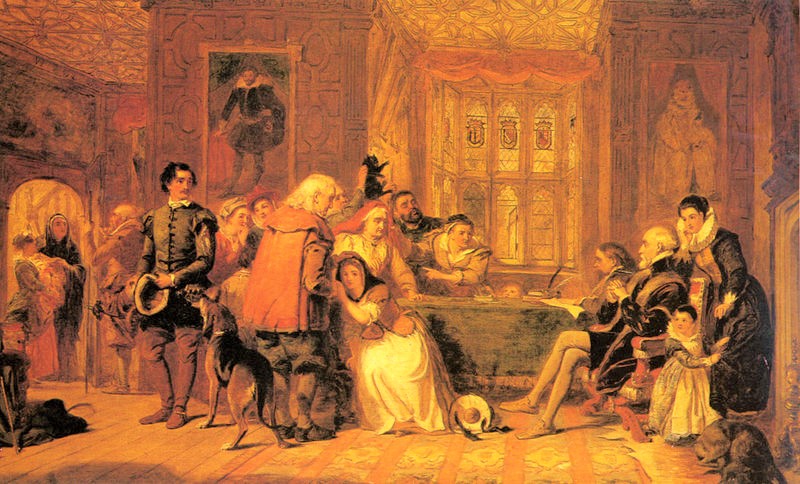 "The Witch Trial," an 1848 painting by William Powell Frith via Wikimedia Commons

Witch hunt. It's been one of Donald J. Trump's favorite phrases for more than two years.

He's used the term 310 times, according to Factba.se, the website launched in January 2017 by Virginia husband and wife team Bill Frischling and Jennifer Canty as a way to track and share all of Trump's utterances, be they verbal, written or, most frequently, on social media.

The last time Trump invoked witch hunt to decry investigations linked to him was in a Tweet the afternoon of May 12:

....employment numbers ever, low taxes & regulations, a rebuilt military & V.A., many great new judges, & so much more. But we have had a giant SCAM perpetrated upon our nation, a Witch Hunt, a Treasonous Hoax. That is the Constitutional Crisis & hopefully guilty people will pay!

Such diligence in keeping us apprised of what Trump talks about is why Factba.se gets this weekend's Saturday Shout Out recognition.

And yes — you knew this was coming — I did a Factba.se search for "taxes."

The website says Trump has mentioned taxes 1,860 times, most recently in his address to the National Association of Realtors on May 17.

Global witchcraft: But it wasn't Trump's fondness for the term witch hunt, which has a long political history, that caught my eye recently.

Rather, it was a story about witches in Romania who are fighting corruption in their country with spells and magic.

Self-proclaimed witch Mihaela Minca told Euronews that she and her sorceress peers are working on a mass ritual ahead of the country's May 25 vote to enlighten candidates' minds so they take the best decisions for the Romanian people.

And they've gone beyond those spells.

A network of Romanian witches, including Minca, also are trying to curse Romanian lawmakers they deemed corrupt.

"We carried out two special rituals on Romanian politicians: A white magic ritual to enlighten their minds and powers to fight in Romania for the people, to do good things. And I did a black magic ritual on the politicians who don't keep their words to offer a better life to Romanians, so (because of my ritual) they will have problems," Minca told the news service.

Spells via the internet: I know what you're thinking. Are these women available for an international job?

Minca and her daughters who share her supernatural proclivities are online, where they offer their services to clients around the world.

"People who need our help need to send us their pictures and names and because they are at such a great distance, it's enough to just see them on Facebook and then we cast the ritual spell," according to Minca.

Taxable talismans: Even better for my blogging purposes, there's a witchcraft tax connection.

While witchcraft is a centuries old folk custom in much of the world, as modern-day costs have increased, the practice has become a revenue producer for governments.

That's the case in Romania, where 21st century witchcraft now is a taxable profession.

Romanian witches, along with fortune tellers, tarot readers and others with mystical talents, must not only obtain permits to practice their ancient customs, but pay tax on their earnings.

If only there was a spell to deal with that!

What! I thought its only African countries we talk of politicians consulting sorcerers prio to elections! Sure its a global witchcraft.

Only a few admit to resorting to the dark arts, though talk is rife. How the politicians really enrich the witch doctors.

Clerics fulminate against witchcraft, which they call devil worship, but few rubbish the dark arts. Let the politicians rely on God their creator for success in their elections and peace will dwell in their lives.