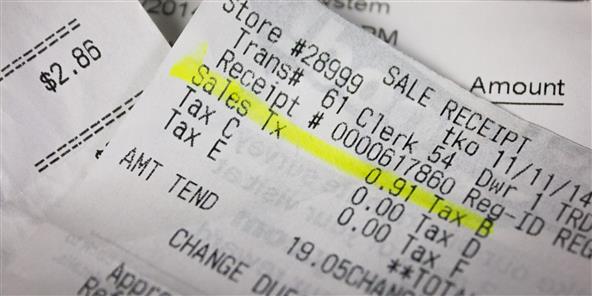 Taxes are a pain in the derriere, regardless of what form they take.

Most folks tend to focus on — and hate — income taxes more than other types. That's because the majority of workers tend to pay a portion of our earnings to Uncle Sam.

Then there are the myriad state and local taxes (SALT).

SALT covers income taxes from these lower taxing jurisdictions, as well as real estate and, to some degree, personal property taxes.

SALT taxes have come under renewed scrutiny since the enactment of the Tax Cuts and Jobs Act (TCJA), which has limited the amount that can be deducted on federal tax returns.

And, of course, there are sales taxes.

Paying more for your purchases: For the most part, sales taxes tend to fly under the radar, except of course during the debate about online purchases.

But that having been settled, sort of (Congress is still looking at getting involved), by the 2018 Supreme Court decision in South Dakota vs Wayfair, folks grumble but keep buying and paying the associated sales tax.

Sales taxes, however, play a big revenue role for many states and their other taxing entities, like cities, counties, school districts and assorted special tax jurisdictions.

Only five states don't have a statewide sales tax. They are Alaska, Delaware, Montana, New Hampshire, and Oregon. Alaska, however, allows for local sales taxes, while the other four are totally sales tax free at all governmental levels.

So just how important are sales taxes to the states that collect them? The Tax Foundation has updated its look at the extent to which states rely on sales taxes.

The map below, based on fiscal year 2016 data (the latest available) offers a purply perspective. 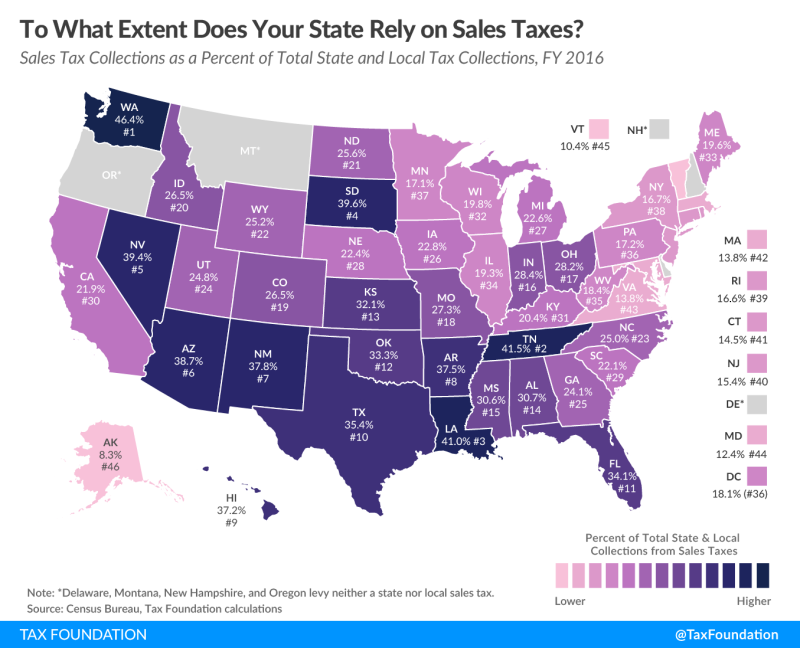 "States and localities that border low-sales tax or no-sales tax jurisdictions often struggle to levy sales taxes with high rates, as these could prompt consumers to shop across the border," writes analyst Janelle Cammenga.

Another consideration, she notes, is the state's sales tax base. This is exactly what is subject to the tax.

"Public finance experts generally argue that a sales tax should apply to all final consumption, both goods and services. In practice, though, many states fall short of this ideal due to historical accident or policy decisions to exempt certain classes of goods," writes Cammenga.

Top 10 sale tax dependents: Texas, which has no state income tax and in November will let voters decide on whether to make the Lone Star State's current constitutional prohibition against such a tax even stronger, comes in 10th on the sales tax dependence list.

Lawmakers here even tried to up the state's 6.25 rate another percentage point this last legislative session in their contortions to fiddle with lower-level property taxes and public school financing. But opponents to increasing an already regressive tax was able to derail the hike.

Topping the sales tax reliance list is Washington. That Pacific Northwest State has no corporate or individual income tax. It does collect a gross receipts tax on businesses.

But sales taxes account for almost half (46.4 percent) of the Evergreen State's total tax collections.

Here's the full top 10 sales tax reliance list with the percentage of revenue each state gets from sales taxes:

It's no surprise that many of these states collect no or relatively small taxes on other revenue sources.

Several also are tourist meccas, where out-of-state visitors to Music City or America's Paradise or Mardi Gras or Vegas, baby, will pay sales taxes on purchases they make during their visits.

Do sales taxes in your state pose a problem to your purchasing power?

Do you think, like Ichabod Crane upon viewing the tax on his breakfast pastry in Fox television's Sleepy Hollow, that some sales taxes should be sending us to the streets in outrage?

Or do you not worry about the extra pennies (or more) added to your purchases?