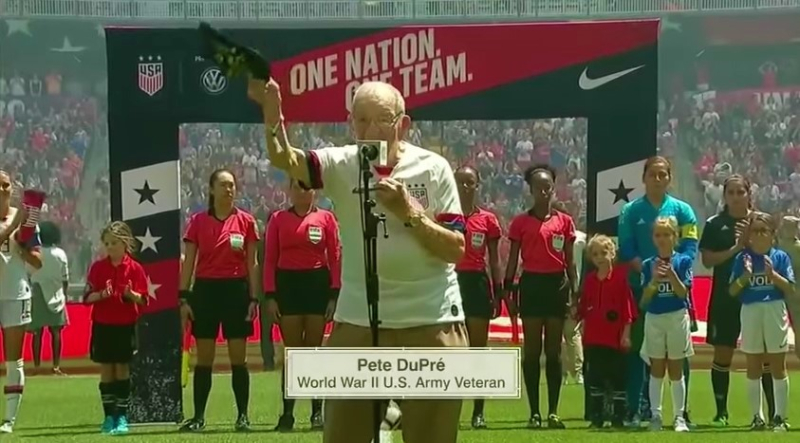 Pete DuPré, a 96-year-old WWII veteran, wowed the crowd at the U.S. Women's National Team soccer match on May 26 with his harmonica rendition of the National Anthem.

Most of us will, in some form, remember and honor this Memorial Day all the sailors, soldiers and airmen and women who sacrificed all in service to our country.

Whether it be at official parades or other ceremonies or simply at personal outings, music is likely to be a part of the event.

I've compiled my own playlist. Note to link-clickers, most of the ones below go directly to sound clips, so be prepared.

Star-Spangled Banner bonanza: Of course, the National Anthem, like the spectacular pre-Memorial Day version performed by World War II veteran Pete DuPré, is always atop the list of songs for this somber holiday.

If you prefer a more orchestral — and early — presentation of the Star Spangled Banner, the Smithsonian Institution has offers a 19th century version performed on original instruments from the National Museum of American History's collection. Arranged by G.W.E. Friederich, the clip lets us hear how the song would have sounded in 1854.

March and musical theater mastery: A close second to get the patriotic spirit soaring, you have to have March King John Philip Sousa's stirring Stars and Stripes Forever. This version of our national march is performed by United States Marine Band.

There's one more flag-related tune that has to be on the list, You're a Grand Old Flag. This song was written by George M. Cohan — who, as tax encore, has his name attached to tax record keeping rule —  for his 1906 stage musical "George Washington, Jr."

Most of us nowadays, or at least those of us who are of a certain age or are classic movie fans, are more familiar with Jimmy Cagney's version from the 1942 Cohan film biography, "Yankee Doodle Dandy." 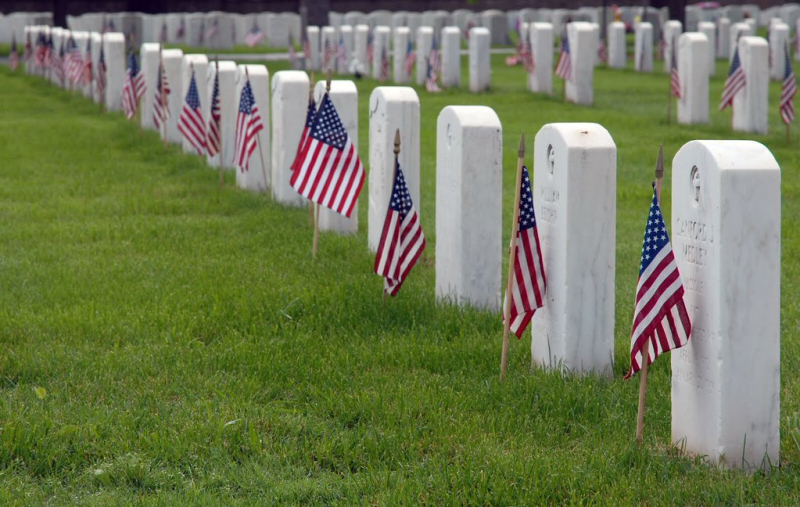 Of course, from here deep in the heart of Texas, I have to recommend Bruce Robison's Travelin' Soldier. This song about a young man who didn't make it back from Viet Nam made me cry the first time I heard it. I still tear up every time it plays.

I'm not alone. The Dixie Chicks' version of the song made a recent list of saddest songs. If you click the Chicks' link, you'll have to sit through a few seconds of ads before Natalie Maines starts singing, but that's actually is a good thing. That way, you have time to check that you're alone so others won't see you sob either!

Soldiers' send-off: Finally, since this is, sadly, a day to remember and honor those who died while in our country's military service, I have to end with Taps, performed by the United States Army Band "Pershing's Own" at Arlington National Cemetery.

My heart goes out on this special day to the families whose loved ones gave all for all of us.

Our gratitude is small solace, but may it help you find some peace this and every day.