Horse named Tax is running in the Kentucky Derby 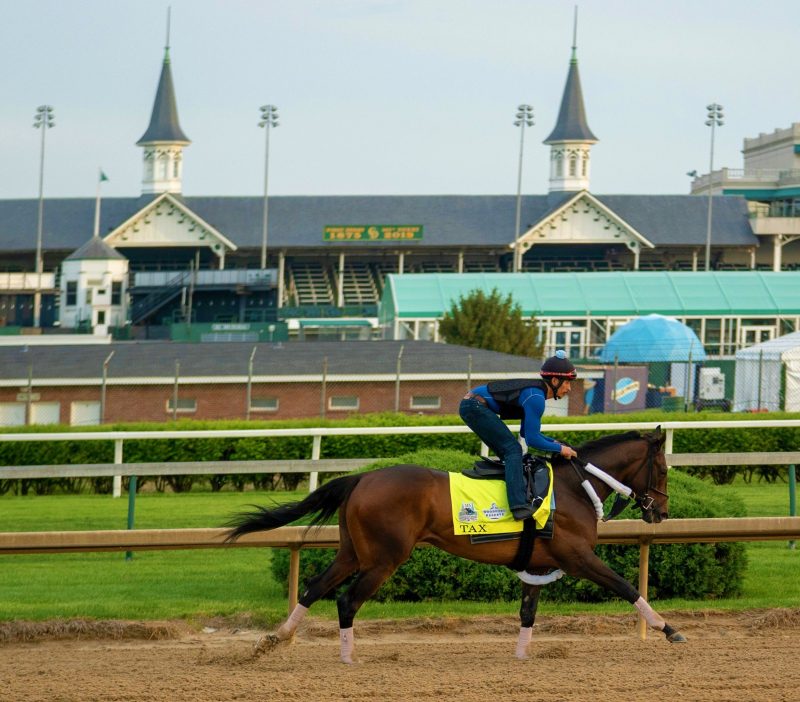 The first time I bet on a horse I was just 9. My family was vacationing in Ruidoso, New Mexico, and my dad put $2 on the quarter horse I selected the day we visited Ruidoso Downs.

I can't remember why I chose that horse in that race, but I do remember it won.

I also remember the last time I bet on a horse.

It didn't win, but I do remember why I picked it. It had the same name as my cat.

Arbitrarily picking ponies: Yeah, I'm one of those most casual of bettors. I don't look at odds or lineage or trainers or anything remotely logical in picking a pony. I go by my gut or how the animal looks or, yes, its name.

So it's no surprise that when the thoroughbreds Run for the Roses at Churchill Downs this Saturday, May 4, I'll be pulling for if not actually betting on Tax.

Yep, that's the name of one of the 3-year-olds entered in the fabled Kentucky Derby. The chestnut colt also will compete in the other Triple Crown races, the Preakness Stakes in two weeks in Baltimore and the Belmont Stakes on New York's Long Island in June.

It is sponsored, fittingly, by Dean Dorton, a full-service accounting, technology and consulting firm with offices in the Derby's hometown of Louisville, as well as in Lexington, Kentucky, and Raleigh, North Carolina.

More than just a name: If you're interested in putting down a few bucks on Tax and want more than just his name, here's what Horse Racing Nation has to say —

Tax, 20-1 (Danny Gargan, trainer/Junior Alvarado, jockey): Claimed out of his maiden win at Keeneland by the current connections, he has since made three starts, all 1 1/8-mile graded stakes at Aqueduct, including a victory in the Withers Stakes (G3). Gargan is a first-time Derby trainer with a colt looking fit to stalk the pace.

The Lexington Herald-Leader also has a good piece by John Clay on how Tax and Gargan (and Dean Dorton) made it to the 145th running of the greatest two minutes in sports.

You also can get the scoop directly from Dean Dorton on its foray into the sport of kings.

Long, but better, odds: The 20-1 notation in the brief on Tax was the horse's odds of winning as of April 30 when the horse racing site posted its overview of the upcoming Kentucky Derby entrants.

That's much better than the 60-1 odds cited by Richard Rubin, tax reporter for The Wall Street Journal, when he noted on social media the race entry reminiscent of the Internal Revenue Code.

Guys, there's a horse named Tax in the Kentucky Derby and it's a 60-1 shot but so was TCJA at various points and I'm going to do nothing but make jokes about this between now and Saturday.

Check out Rubin's full Twitter thread for added Tax and tax quips by him and his followers, which explain why tax geeks rarely are comedy writers. #RimShot!

I do agree, however, with Rubin on why the horse is no longer the longest of Derby shots:

"OK it was a 60-1 shot but now all the nerds and accountants are skewing the odds," wrote Rubin.

I even joked (sorta) in response to Rubin's initial Tweet that I "gotta find a way to put a few dollars on this pony!"

A Tax win means tax consequences: I'm not sure I'll actually get around to placing a bet, but I will be watching and pulling for Tax on Saturday.

If you're going to be part of the Twitter hash tagged #ItsTaxTime team, welcome to the meeting of the horse racing-tax geek world!

If you decide to take your support a step (or furlong) further and put a few (or more) dollars down on Tax at your local betting parlor, be ready (like the Texas woman last year who placed a lucrative Kentucky Derby bet) to face the tax consequences.

Just in case your luck is as good this year, in addition to reviewing the Daily Racing Form, you also might want to check out my earlier post on how to report taxable gambling winnings.

Their are some strange names in Horse Racing the best one I have ever seen was at a Race Night and his name was Scott Chegg.
If you are from outside of the UK and you don’t know what a Race Nights is Race Nights can raise you over £1000.00.
As a Football club looking to Raise Money we were very unsure as their is a lot of work involved however it was worth all the hard work.
We used a company in Manchester and they were really good.
We Raised £1600.00 in total.

Just to be clear, a CHESTNUT horse is solid color of reddish brown (wide range of light to dark) with a mane and tail of the same color or lighter. It can be a darker shade of the coat color but it is never black.

A BAY horse's body can from light reddish brown to nearly black. The mane, tail, and lower legs are always black. there can be white markings on the lower leg, but otherwise black. "Dark bay or brown" is bay horse with very dark coat color like the colt seen above. They can often appear black, but up close you can see there is brown hair.

1) Tax is not a chestnut, he is a Dark Bay or Brown. colt, as the photo shows.

2) While he is eligible to run in the Preakness and Belmont Stakes, none of the owners/trainers will make that decision until after the Kentucky Derby, and many who were unsuccessful in the Derby skip one or both races.

He finished 2nd to my first choice, Tacitus, in his last start and has a good outside shot to finish in the money.

Tax is a pretty well-bred colt, by Arch and out of the Giant's Causeway mare Toll. His name is a lovely spin on his mother's and continuing the single-syllable theme.