New parents Harry and Meghan don't have to worry about the expense of their new bundle of joy. But for us non-royals, raising children is costly. We former colonists here across the pond can get some help covering those costs thanks to several U.S. tax breaks. 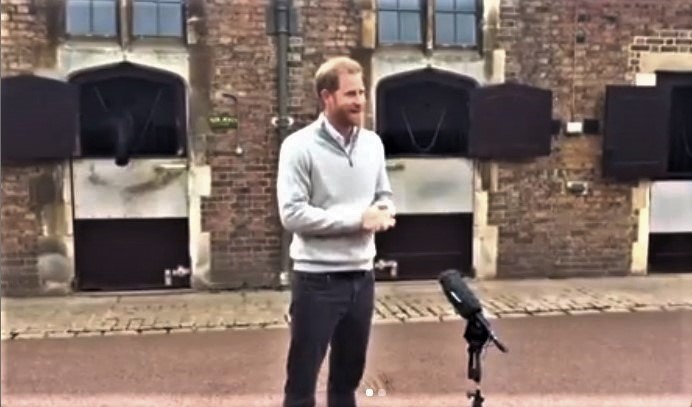 An obviously elated Prince Harry announces the birth of his and wife Meghan's son. (Screen shot from the Sussex Royal Instagram)

It's a boy! Watchers of the Royal Family in the United Kingdom, here across the pond and yes, worldwide, are celebrating today's announcement that the Duke and Duchess of Sussex are now parents of a son.

The baby arrived at 5:26 a.m. on May 6, weighing in at 7 pounds, 3 ounces. Harry personally announced his son's arrival and posted the video on the couple's Instagram account.

Now the wait is on to learn what Harry and Meghan as they are popularly known will name* their child, who arrived seventh in line to the throne. In case you're keeping track, the ascension order starts with grandfather (1) Prince Charles, the Prince of Wales; then to uncle (2) Prince William, Duke of Cambridge; cousins (3) Prince George, (4) Princess Charlotte and (5) Prince Louis; and proud papa (6) Prince Harry. The royal infant bumps Prince Andrew, the second son of Queen Elizabeth, into eighth place.

Costly child rearing: Harry and Meghan obviously won't have to worry about how they'll care for their little prince. The royal family is worth around $88 billion. Meghan Markle's net worth, calculated before she and Harry exchanged vows, was about $5 million. Prince Harry's net worth is believed to be between $25 million and $40 million.

We all should be so lucky, especially if we're parents. It costs a lot to raise a youngster. 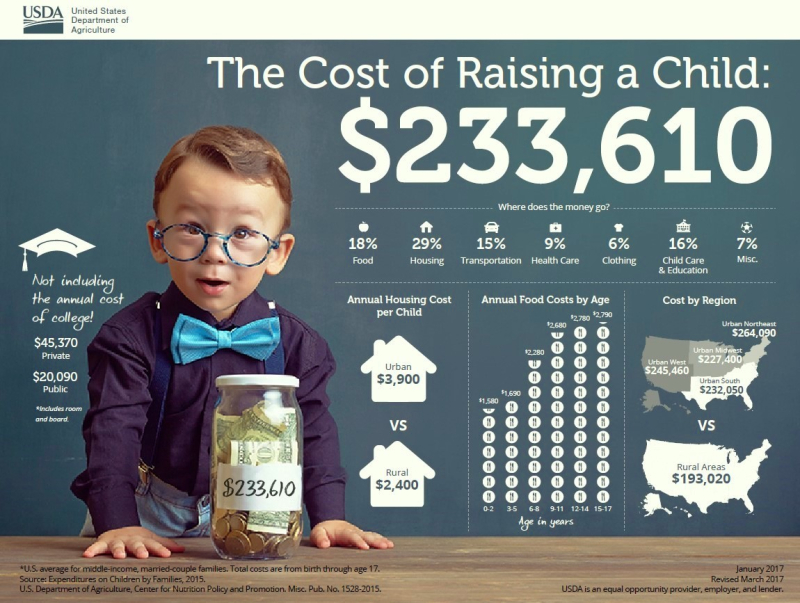 That's how much the U.S. Department of Agriculture's (USDA's) Center for Nutrition Policy and Promotion (CNPP) estimates that a middle-income married-couple family will spend on a child from the day he or she is born through age 17.

Costs have just gone up over the years. Where you live matters, too. You can get a more accurate accounting for your personal situation by using the USDA's Cost of Raising a Child Calculator.

Tax help from the Internal Revenue Code: Once you recover from that shock of that figure, you can turn to your dear old Uncle Sam for some help in raising your princes and princesses.

Specifically, the U.S. tax code offers a variety of tax breaks for parents.

Here's a look at five of the most popular ones.

Since it's a credit, it offers a dollar-for-dollar reduction of any tax the eligible taxpaying parent owes.

Even better, up to $1,400 of the CTC credit is refundable. This means, as the name indicates, that if a taxpayer doesn't owe any tax before claiming the credit, the filer can receive the refundable amount as a tax refund.

A taxpayer can claim the credit if all of these apply:

This tax break, again a valuable tax credit, covers up to $3,000 spent on care for one child or up to $6,000 for the care costs two or more kids. The actual tax credit you can get is a percent of those costs that is based on your adjusted gross income. So you must do some math to come up with your exact tax credit amount.

3. Head of Household filing status: Personal situations can affect your tax filing status, so getting it right on your tax return is critical. That's especially the case when a parent is raising kiddos on his or her own.

Head of household (HoH) status applies in most cases to folks who are not married and take care of the needs of dependents.

HoH's biggest immediate tax break is that it provides a larger standard deduction than the single filing status. In addition, the income brackets and applicable tax rates for HoH filers usually are more favorable than those in the single or married filing separately categories.

Among the key requirements to be able to file as a household's head is that you pay during the tax year more than half the cost of keeping up a home for yourself and a qualifying dependent.

4. Earned Income Tax Credit: The Earned Income Tax Credit (EITC) first appeared in the tax code in 1975 as part of that year's Tax Reduction Act. It was a logical extension of the 1960s-era War on Poverty, creating a way for lower-paid workers to offset the Social Security taxes that take a relatively big bite out of their smaller paychecks.

In 2018, around 25 million eligible workers and their families received an estimated $63 billion thanks to the EITC. But the IRS says that every year millions of eligible taxpayers overlook this potentially valuable tax break.

Even better, these amounts are refundable, meaning any credit amount that is more than your tax bill comes back to you as, per its name, an IRS refund.

While, as the credit's name indicates, you must earn money to claim the EITC, you can't make too much. The For the 2019 tax year, inflation adjustments mean that your earned and adjusted gross income (AGI) each must be less than the following amounts in order to claim any EITC amount:

In addition, if you have what the IRS deems is "excessive investment income," you're not eligible for the EITC. For 2019, that amount is $3,600.

5. Adoption tax help: Uncle Sam also can help when a family grows via adoption. There are two avenues to cover these costs, either the adoption tax credit or via tax-free help from your employer. This benefit is adjusted annually for inflation.

In 2019, parents who adopt can claim a tax credit of up to $14,080 to cover the adoption process' many costs. That same amount can be provided by the new parents' employer as a tax-free benefit.

Both the adoption tax credit and income exclusion amounts begin to phase out in 2019 when individuals have modified adjusted gross incomes greater than $211,160. Once the adoptive parents hit MAGI next year of $251,160, they cannot claim the tax-favored adoption assistance.

Depending on the adoption's cost, you may be able to claim both the tax credit and the exclusion. However, you can't double dip; that is, you cannot claim both a credit and exclusion for the same adoption expenses.

Research the requirements: If you can claim any or all of these tax benefits in connection with your child, great!

But be sure to pay close attention to each tax break's eligibility requirements, both as they relate to you, the adult, taxpaying parent and your child who qualifies you for the break(s).

Tax help beyond parenthood: Technically, many of these tax benefits also are available to folks without qualifying children.

For example, the EITC is available for single, no dependent filers. In this case, tough, the credit amount is not nearly as large, just $529 for the 2019 tax year if you don't have any qualifying children.

Dependents for whom you can claim some tax breaks, such as the child and dependent care credit, also can be older relatives. The same is true for being able to file as head of household.

And if your dependent is not your child, you might be able to claim the TCJA's new $500 credit for these other folks who depend on you. This credit covers such individuals as such as an older-than-17 child or aging parents.

But in most cases, these tax breaks are claimed mostly by parents.

Considering how much you'll be shelling out over your youngsters' lives, take all the help from Uncle Sam that you can get.

Yikes! Thanks for the update.

Just giving you the heads up to a major breaking story: Wolters Kluwer, publisher of CCH tax publications and ProSystem tax software, has apparently shut down customer access to its cloud services **worldwide** as a result of the discovery of malware. Scary stuff