When Social Security benefits are taxed

Social Security might be in trouble, but as long as it's around in some form, Uncle Sam will keep collecting taxes related to it. That includes not only the payroll taxes from workers that go toward funding the federal retirement benefits, but also in some cases on the benefits themselves. 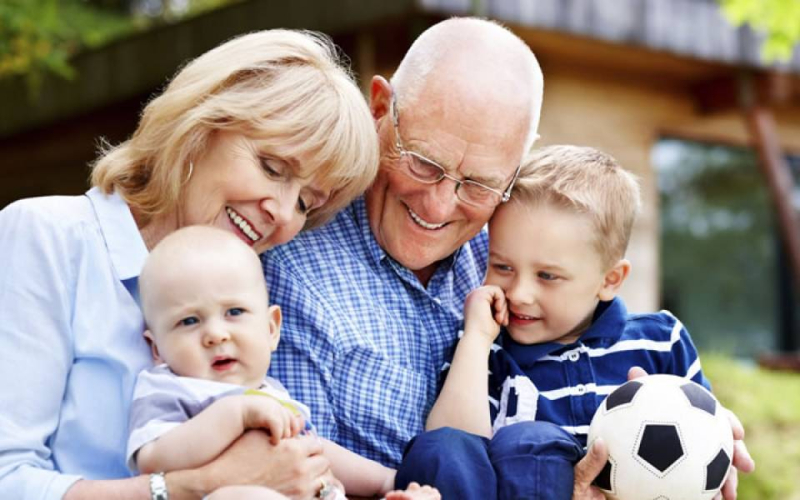 If you have enough money when you're older to enjoy time the way you want with your grandchildren, you might face taxes on your Social Security benefits.

Stop me if you've heard this before. Social Security is running out of money.

That's the latest word from the trustees of the Social Security system. It's the same sad news as they gave of last year.

But the 2019 annual report issued this week does have a glimmer of better news. Instead of facing insolvency in 2034, the date has been pushed back a year.

It will now be 2035 when, according to the report, that the trust fund for Social Security will be depleted.

As of the end of March, more than 68.3 million people were receiving Social Security, Supplemental Security Income or both. The average benefit was $1,347.06.

The companion federal medical program Medicare isn't in very good shape, either. Combined, Social Security and Medicare accounted for about 45 percent of the federal budget in fiscal 2018.

"Both Social Security and Medicare face long-term financing shortfalls under currently scheduled benefits and financing," according to the programs' trustees, who urge Congress to take action sooner rather than later so that incremental changes can be phased in to prevent a dramatic disruption.

Without those changes, trustees say Social Security recipients will get only about three-quarters of currently scheduled benefits when 2035 arrives.

How worried should we be? All of us are getting older. And most of us have paid into the government programs to help us out with retirement and medical costs when we enter our 60s.

If you're nearing the age you can take Social Security early, the latest report might be prompting you to consider that.

But before you make the call to the Social Security Administration, take a breath.

Skeptics assure us that we shouldn't be too worried. The trust fund, they say, is an accounting gimmick. Instead, the tax money we thought was dedicated to Social Security has been diverted to Uncle Sam's general revenue account, with a federal IOU issued to the fund.

Retirement promissory notes will continue, these folks say, or the money will simply come out of the general funding account if needed.

Those who are slightly less cynical note that these annual predictions have been around since, well, the system started, or at least since 1983 when lawmakers made the last changes to the Social Security system.

Congress will act, they say, although probably not until the last minute, to make necessary changes to keep the Social Security system running, which along with Medicare relies on tax revenue and interest from their respective trust funds.

Once reason for such confidence that changes will be made is that older Americans are the most reliable voters. That means politicians can't afford to let a let a key component of most elderly individuals' portfolios go bust.

Taxes will continue to be collected: As we await whatever tweaks might be in the offing, we'll keep seeing FICA (Federal Insurance Contributions Act) annotations on our pay stub and self-employment payments of entrepreneurs going toward these programs.

But that's not the only Social Security-related tax.

When you start collecting your benefits at whatever level is being paid then, you'll likely be paying tax on that, too.

You pay into Social Security while you're working. Then if you've done what advisers say and stashed cash to supplement your Social Security, you pay again when you collect.

The tax cost of retirement saving: Generally, if Social Security is all that you're living on, then you don't have to worry about filing a return. Of course, if you're relying solely on Social Security to get you through your Golden Years, you have other worries, but that's a post for another day.

If, however, you supplement your Social Security with other income, either earned by a job or via your investments, you might owe taxes on some of the benefits.

Basically, the greater your total amount of benefits and other income, the greater the taxable part of your benefits, which could be on 50 percent and as much as 85 percent of your Social Security money.

The current general rule is that single taxpayers face federal taxes on some of their Social Security benefits if their combined income is more than $25,000.

Married couples who file joint returns will pay the taxes when their combined income is more than $32,000.

Here's a bit closer look at how it works.

Figuring how much to tax: To determine if you owe tax and if so, how much, you start with the Form SSA-1099, Social Security Benefit Statement, you got in January. It shows the amount of benefits you received (box 5) in the previous year. Then add one-half of that benefits amount to any other income — your adjusted gross income that includes taxable pensions, wages, interest and dividends — along with any tax-exempt interest income you received.

Base income, taxable percentages: You use the benefits statement when you complete your federal income tax return to find out if your benefits are subject to tax.

If you file as an individual — this includes the single, head of household and qualifying widow(er) filing statuses — and your combined income is between $25,000 and $34,000, you may have to pay taxes on up to 50 percent of your Social Security benefits.

Up to 85 percent of an individual's benefits are taxable when combined income is more than $34,000.

Married couple who file a joint return may have to pay taxes on 50 percent of benefits if spouses have a combined income that is between $32,000 and $44,000.

Joint filers with income of more than $44,000 will see up to 85 percent of your Social Security benefits to be subject to income tax.

And if you're married but you and your spouse file separate 1040s, you probably will pay taxes on your benefits.

Married filing separately filers who did not live with their spouses at any time during the tax year have the same base amount as individual filers.

If, however, spouses lived together at any time during the tax year but just didn't want to file together, the base amount is zilch. That's right, zero dollars.

Final calculations, possible withholding: You figure your taxable Social Security amount using your tax software or the worksheet on page 33 of the Form 1040 instruction book.

The Internal Revenue Service also has an online interactive tool to help folks figure out if their federal retirement benefits are taxable and if so, just how much.

If you think you discover you will owe taxes on your federal retirement benefits when you file your return, you can reduce that potential lump sum bill by having taxes withheld from your monthly Social Security payments.

You can choose to have 7 percent, 10 percent, 12 percent or 22 percent of your total benefit payment withheld. Just complete Form W-4V, Voluntary Withholding Request, and file it with the Social Security Administration.

Save anyway: I know. Getting taxes on Social Security is not something any of us wants. But it is what it is.

Given that option or living on Social Security alone, I'll grudgingly pay the taxes.

Not to be preachy, but that should be your attitude, too.

So keep saving. And maybe stash a bit extra so that you can cover your added tax on your future Social Security benefits.