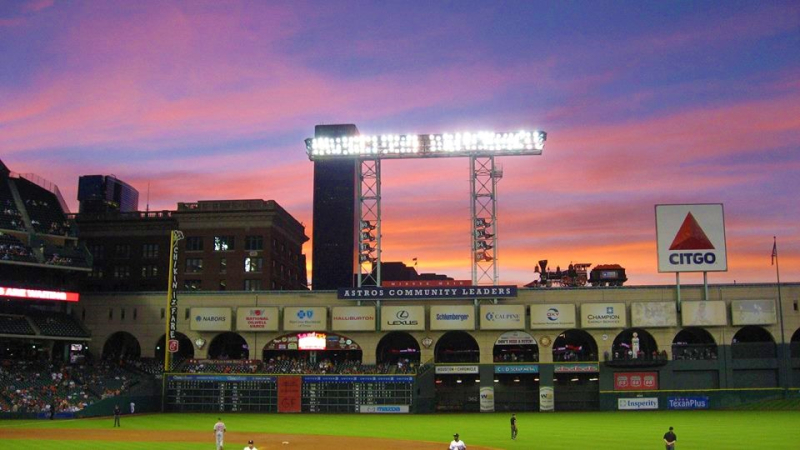 It was a gorgeous sunset at this Astros game at Minute Maid Park, but the Houston MLB franchise and other professional sports teams are looking at a recent IRS ruling that provides them a bright new dawn for favorable tax treatment of player trades. (Photo by Kay Bell)

It's a busy time for professional sports fans.

Now another acronym, this one tax-related, is getting into the games.

The new tax law enacted in late 2017 made changes to the Internal Revenue Code's Section 1031, which covers what is commonly referred to as like-kind exchanges of business property.

Before the new law, professional sports teams generally treated personnel trades as like-kind property. That way, they didn't have to recognize gains in the years the transactions were made.

The TCJA, however, restricts 1031 exchanges to real property. Under the new law, sports teams that trade players would effectively be trading players' contracts, which are regarded as assets for tax purposes.

Tax costs of trades: The TCJA change meant that teams would have to pay taxes every time they traded players instead of using the prior Section 1031 application that let them make the trades on a tax-free basis.

And that possibility, complained team owners and managers, likely would discourage trades.

Over the life of a player's contract, the value may fluctuate based on many factors, including performance, the needs of the team, fan attendance, size of the team's market, injuries and the expectations of the player’s team. Generally, each team that makes a trade of player contract or draft pick believes that it is receiving something of equal or greater value than what it gave up.

However, the determination of whether a player is paid above or below market may be different for each team involved in the trade, because of the difficulties in valuing a player's contract. As a result, assigning a monetary value to the player contract would likely be different for each team involved in a trade, which makes the determination of an amount realized in the exchange difficult.

If the exchange qualifies for the safe harbor method, there is generally no gain or loss on the trade.

However, if cash is involved things change. When a team receives cash, that amount becomes an amount realized and, to the extent there is no basis in the player contract given up, the cash will be an amount recognized as a gain.

The reason for the safe harbor, according to the IRS revenue procedure, is "to avoid highly subjective, complex, lengthy and expensive disputes upon exam. In order to qualify: (1) all parties to the exchange must use the safe harbor; (2) the exchange may only include player contracts, draft picks and cash; (3) no personnel contract or draft pick may be a Section 197 intangible; and (4) the financial statements of the teams must not reflect assets or liabilities from the trades, other than cash."

Be sure to keep all this in mind, along with the harsh reality that the game you love and often breaks your heart is at its core a money-making business, the next time your teams trade players. I know I will, once I finish cheering or cursing the move.

Yay team, if not tax policy: I have mixed feelings here.

But then I've grown used to, if not happy with, such tax benefits getting doled out like this.

It's going to take a lot more than periodic tax bills to change our continual them that's got shall get tax policy approach.

On the other hand, however, I want my favorite teams to make trades based on club needs without having them potentially torpedoed by taxes.

These dueling tax and sports feelings are why RP 2019-18 earns this week's By the Numbers recognition.