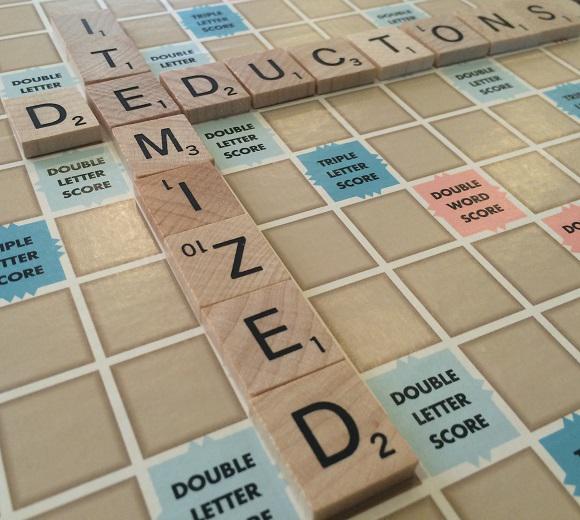 That also could be trouble for those of us who still will file a Schedule A. With fewer itemized expenses to review, the Internal Revenue Service theoretically could have more time to spend looking at everything we write off on this Form 1040 attachment.

And excessive deductions are one of the common tax audit triggers.

One of those deduction amounts, the one for state and local taxes, is changing, thanks to the new tax law. Some taxpayers and their members of Congress, however, want to repeal or at least tweak that deduction.

First, though, a look at what and how much can be written off as itemized deductions.

What's the DIF? Of course, if your itemized deductions are legitimate, by all means claim them. Don't worry about an audit. Just make sure you have the documentation to show the IRS if one of its examiners gives you a call.

And realistically, unless you're aggressively pushing the tax envelope, your itemized deductions are not something that should keep you up at night. The IRS' audit rate has hovered around less than 1 percent of returns filed for the last few years.

Still, you might face an examination if your numbers set off the tax agency's automatic initial review system.

This computer-scoring audit filter, known as Discriminant Information Function, or DIF, evaluates tax returns based on IRS formulas it has created from years of data collection. Basically, it looks at deductions, credits and, in pre-TCJA years, exemptions and sets norms for taxpayers in each of the income brackets.

Wolters Kluwer Tax & Accounting is one of those tax specialists. The company each year puts together a table based on prior filing data that shows its professional estimates of the average amount of popular deductions found on Schedule A in various income ranges.

The WK table below is based on preliminary 2016 data. Remember, IRS reports lag because of the time needed to compile figures.

Averages for info only: Wolters Kluwer points out that its averages take into account only those individuals who claimed an itemized deduction for that type of expense. Zero deductions are not factored in. So the average taxpayer with adjusted gross income between $50,001 and $100,000 did not take an average medical expense deduction of $9,375, only the average taxpayer who itemized and claimed a medical expense deduction did.

Also keep in mind that this filing season, the amount of state and local taxes (SALT) that can be claimed on Schedule A is capped at $10,000 for all filers, except married couples filing separately, who can each only deduct $5,000.

If you're in the three highest income brackets in this table, then you won't face any problems with your $10K SALT claim being more than the average because under the new tax law it can't be.

Folks who made less, however, could raise DIF red flags if they top out at $10,000 in the taxes deduction category.

Finally, Wolters Kluwer cautions that these numbers are for our information and, if you're a tax geek (and you probably are if you're here!) entertainment, only. Do not base your itemized deductions on these figures.

And speaking of numbers, I'm picking that now unachievable $50,851 average deduction amount for the wealthiest filers as this week's By the Numbers figure.

Relieving SALT in tax wounds: That large itemized deduction amount explains why the SALT deduction was a target during the formulation of the new tax laws.

As proponents of the tax deduction limitation argued, the richest filers did get the most tax benefit — and cost the U.S. Treasury the most — when it came to the state and local taxes itemized deduction.

Still, some lawmakers are looking to revisit the SALT cap.

That's not a surprise, since the Garden State represented by the pair is almost always leads the country when it comes to states with large real property taxes. Menendez and Pascrell note that many of their constituents are finding that under the TCJA they owe significantly more on their taxes than they did in prior tax seasons.

A pair of freshman House Democrats from Illinois, Reps. Sean Casten and Lauren Underwood, also have introduced SALT legislation. Their bill, however, would revise but not eliminate the TCJA's $10,000 limit.

The Casten-Underwood bill would increase the cap to $15,000 for single filers and $30,000 for married couples. It also would index the higher deduction amounts to inflation.

While it's possible SALT cap changes could happen in the Democrat-controlled House, there's no way they'll get through the Senate where the GOP remains in charge.

In fact, the bills likely won't even make through the Senate Finance Committee, where Chairman Charles Grassley (R-Iowa) has resisted calls to make changes to the Republicans biggest — cynics would say only — accomplishment of the last few Congressional sessions.

Still, keep an eye on the proposals. Depending on what happens in the 2020 elections, the TCJA could be revised before 23 of the bill's individual tax provisions expire in 2025.

Us, too. We don't have a state income tax, but usually take the sales tax deduction + our incredibly high property taxes since ... wait for it ... we don't have an income tax!

I need there to be a whole lot more interest in changing the SALT cap, it hit us incredibly hard this year!