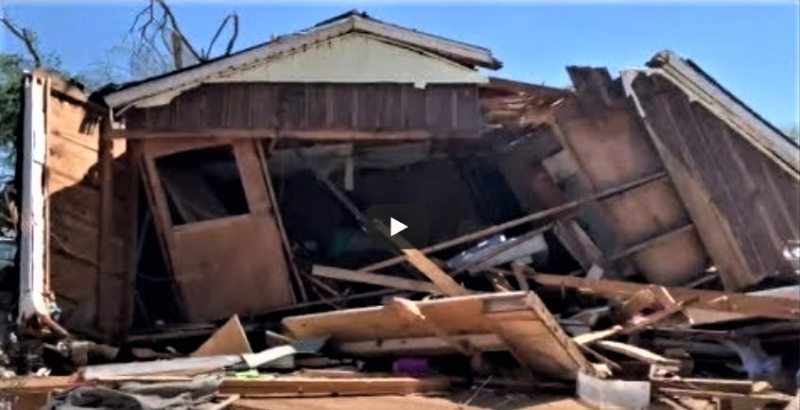 Two tornadoes struck the small East Texas town of Alto on Saturday, April 13. The National Weather Service confirmed on Sunday that the first was an EF-2 tornado and the second was an EF-3. Click image to see video from Disaster Compilations on YouTube.

There are some things more important than taxes on April 15, 2019.

Too many folks in the southern half of the United States are dealing with the loss of family and friends after a deadly weather system moved across that region over the weekend.

At least eight people were killed by the storms, which in addition to tornadoes, some as strong as EF3, also contained dangerous straight-line winds and large hail.

State and local officials in many areas have declared states of emergency.

Now we wait to see if the federal government does the same. If it does, it could make a difference for the taxes of those affected.

When natural disasters are designated by the White House and Federal Emergency Management Agency (FEMA) as major, the Internal Revenue Service typically allows taxpayers more time to deal with their annual tax filing.

Tax Day is 7/31 for some: That's what happened so far this year for flooded filers in Iowa and Nebraska, as well as Alabama residents who dealt with tornadoes back in March.

Many of those states' taxpayers didn't have to file today.

The IRS granted them until e July 31 to send in their individual income tax returns and any payments that normally would have been due April 15.

If this latest round of tornadoes and associated severe weather gets major disaster treatment (and I suspect it will, given its tragic results), folks in designated areas likely won't have to worry about finishing up their 1040s today.

When that's announced, I'll let you know here on the ol' blog. You also can periodically check the FEMA's account on DisasterAssistance.gov, as well as the IRS' online disaster relief page.

IRS disaster help automatic: Anyone who is in a declared major disaster area also might be able to claim some disaster losses.

In fact, they are the only taxpayers who can do due to changes in casualty loss deductions under the Tax Cuts and Jobs Act (TCJA).

While the new tax law provision, which will- be in effect through 2025 unless Congress changes or extends it, now limits who can take this tax break, it keeps the prior-law disaster rules in place.

This means you can only claim losses for which you aren't reimbursed by insurance. Your adjusted gross income also will affect how much you can claim.

My earlier post, How to get tax help for your natural disaster losses, has more on the tax claim process.

Taxes, tragedy and tax extensions: Now I'm not one to advocate people ignore the tax laws. But this time, for all those folks still stunned by what happened to their lives because of the weekend's horrible storms, if I were in your situation, I can guarantee I wouldn't be worrying about taxes today.

I'd be focusing on getting my life back to normal as much as possible after such a tragedy before I turned to filing a tax return. To that end, I'd file an extension, which would get me past any storm-related future filing date — all the way to Oct. 15 — that the IRS might provide in the coming days.

You can find more on how to get these six extra months to finish your taxes in my post on getting a tax-filing extension.

As long as you get the extension request filed electronically or on its way if you snail mail it by today, you'll be fine.

Then take care of yourself, your family, your friends, your neighbors and your community. We're all thinking of you, on Tax Day and beyond.