Employee or contractor? The IRS has some guidelines on when each work status applies

UPDATE, Sept. 11, 2019: A California bill is on its way to becoming law and remaking the gig economy in the Golden State. Once  it goes into into effect Jan. 1, 2020, workers must be designated as employees instead of contractors if a company exerts control over how they perform their tasks or if their work is part of a company's regular business. Other states could follow California's example. Here's what the IRS says about delineating between employees and contract workers. 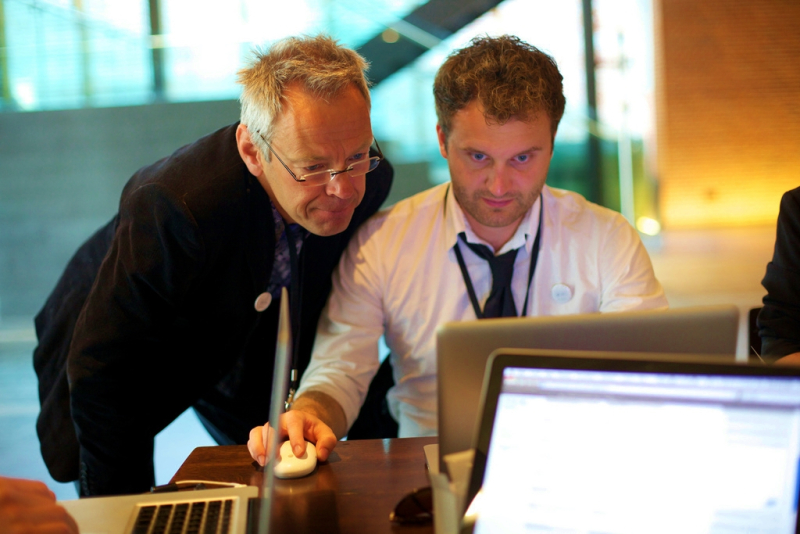 Independent contractor life could be for you if you're tired of having the boss constantly over your shoulder and on your back. But you and your employer must meet some IRS guidelines in order to achieve this nonemployee work relationship. (Photo by Sebastiaan ter Burg via Flickr CC)

Uber is about to go public. It could mean billions for the company and its investors.

That folks are so bullish on Uber's initial public offering (IPO) is astounding to most of us, considering the company's fiscal history.

Uber lost about $3 billion in 2018 and has lost about $10 billion over the past three years. In its latest financial filing, Uber disclosed that it lost at least $1 billion in the first quarter of 2019.

You wonder what the losses would have been if Uber hired employees instead of classifying its drivers as independent contractors.

Why contractors often are preferred: That distinction is important to the bottom line of many companies, large and small, public or privately held, since even when a contractor is paid the same as a full-time employee, the independent workers tend to cost businesses less.

They don't get pensions, to which most employers put in at least a portion when they are defined contribution plans like 401(k)s.

Businesses don't have to pay unemployment insurance costs, federal and state, for contractors. They also are off the hook for collecting the contracted workers' payroll taxes that go toward Social Security and Medicare, meaning they don't have to hand over the company portion of those taxes.

Labor looks at a contracting company: That's why many companies welcomed a move this week by the U.S. Department of Labor (DoL).

Under the new presidential administration, the Labor Department already had rescinded Obama-era guidance for gig drivers who work for Uber and Lyft.

On Monday, April 29, it took another step, issuing an opinion letter to an unnamed but apparent home services related businesses about the classification of its workers.

In it's missive, the DoL said the company "does not impose requirements on how its service providers must perform their work, such as what transportation route to take, the order in which to clean an apartment" or the type of materials they must use.

The DoL letter, like Internal Revenue Service letter rulings on specific tax situations, applies only to the company that sought it. However, other businesses tend to view such communications as indicators of a federal agency's approach to similar cases.

Many folks are freaked out by the opinion letter, which they say could be worth billions of dollars to gig-economy companies at the expense of, according to some estimates, as many as 5 million contract workers.

They fear it's just another move by the current White House and DoL to make it harder for misclassified workers to get the rights, benefits and protections they should from employers.

However, it looks like this Labor opinion letter hews pretty closely to the IRS guidelines on what distinguishes a full-time employee from a contractor.

Employee vs. contractor overview: The IRS says that in determining whether a person providing a service is an employee or an independent contractor, all information that provides evidence of the degree of control and independence must be considered.

This basically is a formal way of saying all work situation are different and the facts and circumstances (yeah, we've heard this before) of each must be taken into account.

The essential determinant, however, is control. Who is primarily in charge, the company or the worker doing the job?

The facts that provide evidence of the degree of control and independence fall into three key categories, discussed below.

A business doesn't have to actually direct or control the way the work is done. It simply must have the right to direct and control the work.

Behavioral control factors fall into the categories of:

Financial control: Financial control refers to facts that show whether or not the business has the right to control the economic aspects of the worker’s job. This includes things like how worker is paid, whether expenses are reimbursed, who provides tools/supplies, etc.

Among the financial control factors are:

Type of work relationship: No, neither the IRS nor I are talking about whether you and your boss like each other.

Rather, this deals with how a worker and business perceive their relationship to each other and the specifics surrounding that job relationship, such as:

Business decides: It is the responsibility of businesses to weigh all these factors when determining whether a worker is an employee or independent contractor.

There is no magic number of factors that makes a worker an employee or an independent contractor. And no one factor stands alone in making this determination.

The keys are to look at the entire relationship, consider the degree or extent of the right to direct and control, and finally, to document each of the factors used in coming up with the determination.

Workers can appeal: When a worker believes that his or her job should rightly be that of an employee rather than a contractor, he or she can ask the IRS for a determination.

Technically, a business can ask for IRS help in clearing up a worker's employee vs. contractor status, too. Practically speaking, though, it tends to be workers who believe they should be reclassified who tend to take steps to appeal their worker status.

You get IRS help by filing Form SS-8, Determination of Worker Status for Purposes of Federal Employment Taxes and Income Tax Withholding. The IRS will review the facts and circumstances and officially determine the worker's status.

Be patient. The agency says it can take at least six months for a determination.

Penalties for misclassifying workers: If the IRS ultimately decides that a company improperly classified an employee as an independent contractor, it could be held liable for employment taxes for that worker.

Where a company realizes that it has misclassified workers, it can look into the IRS' Voluntary Classification Settlement Program (VCSP). This is an optional program that allows the workplaces the chance to reclassify their workers as employees for future tax periods for employment tax purposes. It also offers partial relief from federal employment taxes for eligible taxpayers that agree to prospectively treat their workers (or a class or group of workers) as employees.

And you thought working for yourself was going to be easy!

In most contractor situations, things are above-board and fair to both sides.

But just in case you're ever in a situation where you think you're not being treated appropriately as far as your employment status, keep these employee vs. contractor guidelines handy.