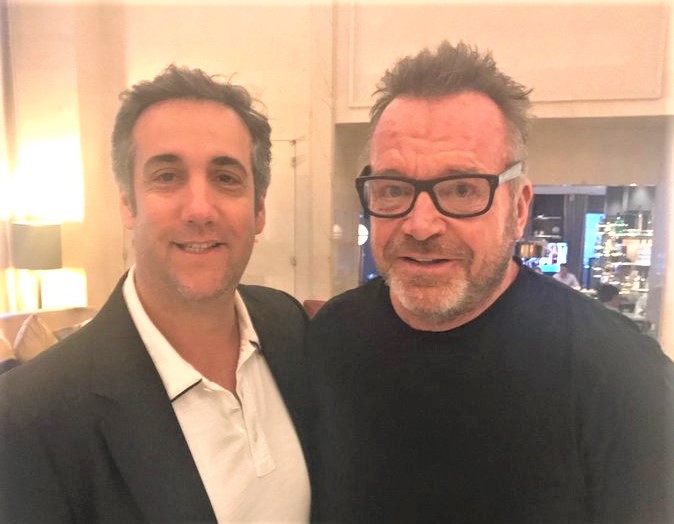 Michael Cohen (left) and Tom Arnold run into each other in New York City in June 2018. (Photo via Tom Arnold on Twitter)

But in a recent conversation with actor Tom Arnold, Cohen said he didn't commit all of the crimes for which he will do time. Specifically, according to the story on the telephone discussion that the Wall Street Journal broke, Cohen says he's not guilty of tax evasion, one of the charges for which he's going to jail.

According to Arnold and a tape of his conversation with Cohen, the former New York City lawyer pleaded guilty to the tax crime simply to protect his family, specifically his wife.

"I am not going to let her get dragged into the mud of this crap, and I never thought the judge was going to throw a three-year fricking sentence," says Cohen, who apparently did not know he was being recorded.

Earlier arguments against the tax charge: Even before his recent heart-to-heart with Arnold, Cohen's lawyer had argued during the sentencing that the tax cheating charges were a stretch.

Cohen had simply failed to identify all his income on bank records he gave his accountant, according to the lawyer's logic.

That obviously didn't sway the judge.

Family motives aside, Cohen will start serving his three-year sentence for tax evasion and other federal crimes on May 6.

Reasons for not reporting income: We can debate Cohen's latest characterization of his legal predicament, his motives for cutting a deal with the feds and whether he deserve his court-ordered fate ad infinitum.

But what is cut-and-dried is that failure to report some or all of your income to the Internal Revenue Service also is one common way that many taxpayers cheat on their taxes every year.

Generally, failure to report some or all taxable income — which, for the most part is basically much of most of what you get; details in this post on what is and isn't taxable income — falls into three categories.

1. Sometimes the non- or under-reporting of earnings is inadvertent and totally innocent. You did that one job way back at the beginning of the tax year and got a couple of hundred dollars. That was so long ago.

And since you didn't get a 1099 — you must earn $600 or more before the payer is required to issue the official earnings statement — you simply forgot about it. The IRS won't, though.

Even without a 1099, that money is taxable income. You are legally required report all your income, even if you don't get official tax documentation.

2. Sometimes it's ignorance or misunderstanding of the tax law. You thought that if you didn't get a form that's copied to the IRS, the money isn't taxable. Sorry. That's wrong.

As just noted in the first reason, even without a 1099-MISC or similar income document, tax law requires you to report all your income. It doesn't matter how small the payment is.

It also doesn't matter whether the payment is cash or property. Bartered earnings still are taxable earnings. You're supposed to count the fair market value of the exchange of property and services. For example, you did some plumbing repairs for your neighbor and got his old scooter as payment. That vehicle value is the taxable payment amount for your work.

Yes, restaurant servers, that includes all your tips, including the basketball tickets one customer left you instead of cash. Technically, you're supposed to be telling your boss about your gratuities every month if you get more than $20. (More on that over in the ol' blog's Time for Tax Tasks item in the righthand column that shows up around the 10th of each month.)

It doesn't even matter if you illegally obtained the income. The IRS doesn't care about the source. It just wants its cut of what you earned in any form or fashion. See Al Capone and his other convicted tax crime buddies.

And yes, taxable income includes gambling proceeds, again regardless of whether your winning wagers are done through legal sportsbooks or under the table with your friend's cousin's neighborhood bookie.

3. Finally, sometimes folks just flat-out cheat on their taxes. They know they are supposed to report the income, but decide not to for a variety of reasons.

It will push you into a higher tax bracket.

You don't want your spouse to know you pocketed some extra cash — or how you got it. See illegal earnings mentioned earlier. And husbands and wives, if you find yourself suspicious of something your partner does or doesn't put on your joint Form 1040, it might be time to consider filing separately.

Or you just hate paying taxes, period, so you're not going to give Uncle Sam his due on money he doesn't know about.

Hard to catch, but not impossible: I know what some of y'all are thinking. In many of these cases, it's going to be very difficult for the IRS to find out about the cash you're keeping secret.

True. The agency's budget limits and personnel attrition mean that it has to focus its tax evasion investigations on areas that tend to provide larger returns than it could get from closely examining every line of every 1040 from all of us average Joe and Jane Taxpayers.

But, and maybe I'm just too much of a worrier, I know that if I knowing hid earnings from the IRS, I'd be spending way too much of my time thinking about what could happen if (or when) my tax fudging was caught.

Your mileage may vary. I'm not here to judge you if you feel comfortable trying to slide one (or more) past the IRS.

I did, however, want to remind you of your full tax responsibilities.

If you now realize you overlooked some reportable, taxable income, you always can file an amended tax return to get right with Uncle Sam. And probably sleep a bit better every night.