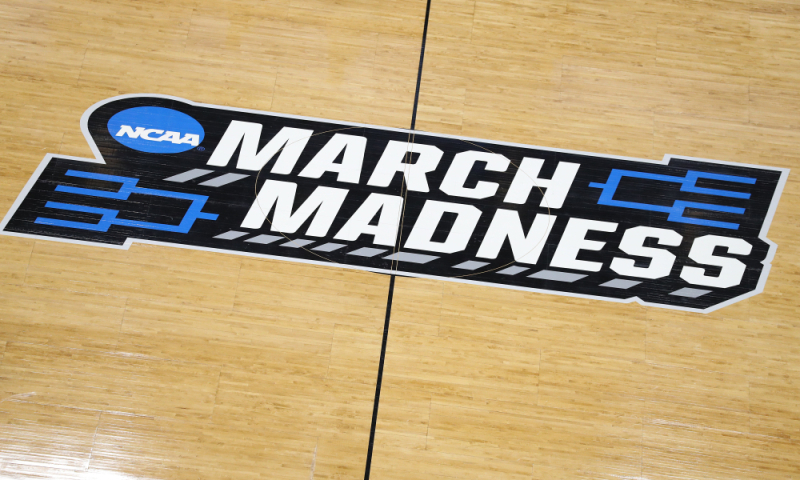 March Madness is heating up. We're down to the Elite 8.

I usually don't pay too much attention to college basketball, or college sports in general. I follow the professional games because I like to yell at the players, and I feel much more comfortable cursing guys who're pocketing beaucoup bucks instead of unpaid college athletes.

I am in the minority, even in my house.

The hubby has been sneaking some TV time watching the NCAA men's basketball championship tournament, though truth be told that's mainly because our alma matter, Texas Tech, is doing pretty well.

UPDATE, 8 p.m. CT March 30: Well, I figured I had jinxed the Red Raiders by mentioning them here, but these guys are good! Congrats on your first trip to the Final Four.

Other fans of the game and/or the 64 teams that started the march in March to the college roundball championship also are keeping close track of the tournament.

Legal betting on basketball: Even if they don't have an actual connection, many have a financial one. They're betting on the games. (Yes, some Tech fans, or not, too.)

This is the first March Madness tournament where betting on sporting events is legal, thanks to the U.S. Supreme Court ruled that all states now can decide whether to allow sports wagering within their borders.

The NCAA, which was one of the losing parties to the Supreme Court lawsuit, isn't thrilled with the change. It posted the anti-gambling announcement on the videoboard before first-round action in Des Moines, Iowa.

Sorry, NCAA. As Twitter poster Mark Ennis' comment indicates, your effort to stem gambling, both legal and under-the-table, isn't likely to make much of a difference.

While the single largest betting day in the United States each year is Super Bowl Sunday, March Madness accounts for the most total money bet on an event. That's obviously because it's spread over several weeks.

This year is no different when it comes to fan wagering. A pre-tourney poll by the American Gaming Association found that an estimated 47 million Americans are expected to bet $8.5 billion during March Madness with 149 million brackets accounting for the major chunk of the wagering.

What is different is that since the Professional and Amateur Sports Protection Act was overturned in May 2018, eight states have chosen to offer state-sanctioned sports betting. Another 23 states have active bills that are considering legalizing sports gambling.

The AGA survey estimates that 4.1 million people will place March Madness bets legally. The rest of the bets will be those that the Internal Revenue Service can't easily track.

But that doesn't mean Uncle Sam's tax collector won't try to get his piece of the betting pie.

It's also the lead into this weekend's Saturday Shout Out to the Illinois CPA Society.

That organization compiled the graphical list below of five key tax issues that people involved in sports betting, including  NCAA March Madness pools, need to keep in mind. 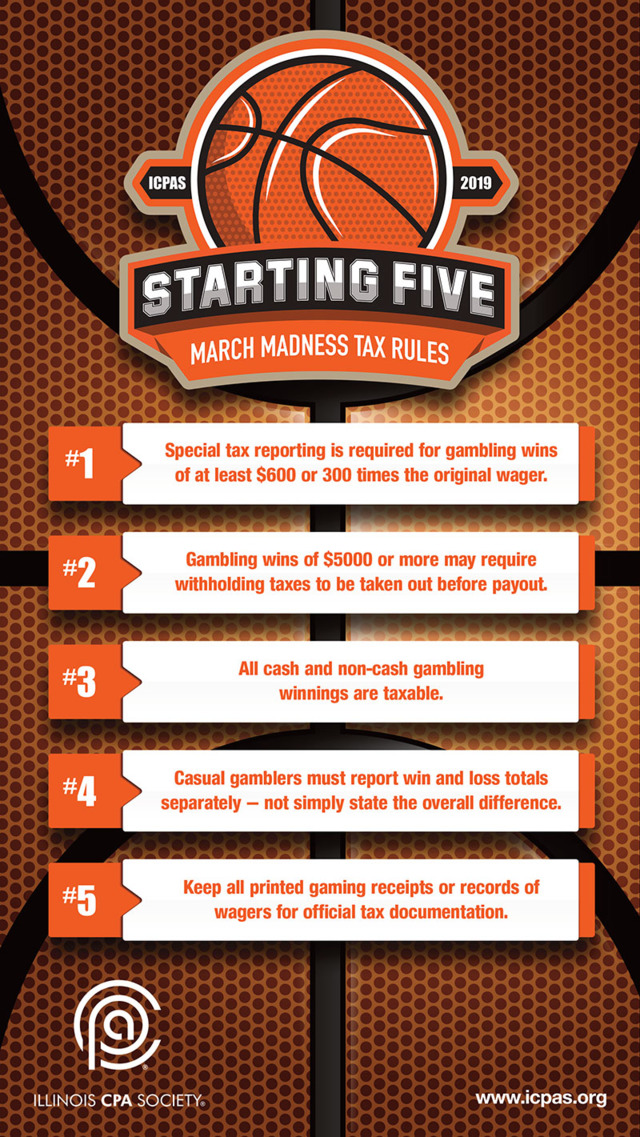 A secondary shout out goes to CPA Practice Adviser, which first published the list.

Tax rules for reporting wagering wins: Reporting your winnings is easy if your take is relatively big. You'll get a Form W-2G showing your cash gambling take or the value of any prizes you win. A W-2G is issued if you win:

Casino table games, such as blackjack, roulette, baccarat, or craps are exempt from the W-2G rule.

But even if you don't get an official tax document, which is copied to the IRS, you still need to report all your smaller gambling winnings, too.

Where to show your gambling income: All gambling amounts are considered other income and go on line 21 of the new Form 1040 Schedule 1.

Gambling income used to go directly on the long Form 1040, but the many tax law changes in the Tax Cuts and Jobs Act (TCJA) prompted the IRS to redesign that form.

The new, and only, Form 1040 is condensed, with prior line items now spread across six new schedules.

And the gambling income now on the new Schedule 1 is then transferred to the additional income entry, line 6, on the new 1040.

Deducting, or not, your gambling losses: This is where tax tip #4 in the Illinois CPA graphic comes into play. As it notes, you need to tally all your tax year's wins and losses separately.

If you itemize instead of claiming the standard deduction, you can use the losses to offset your winnings, but only to the amount you won. You can't create a tax loss based on your bad bets.

And if you don't itemize, those losses won't be any good at all.

If you don't have enough itemized expenses to exceed your standard amount, which has been almost doubled under the Tax Cuts and Jobs Act changes, then you can't claim them. In this case, you must report all your winnings, unaffected by your losses.

You can read more on reporting gambling winnings in my post on, what else, how to report taxable gambling wins.

The IRS also has an interactive tax assistant that help you determine how to claim your gambling winnings and losses.

Good luck, both on your bets and if you're watching the basketball games just for fun or to be true to your school, to your college team.