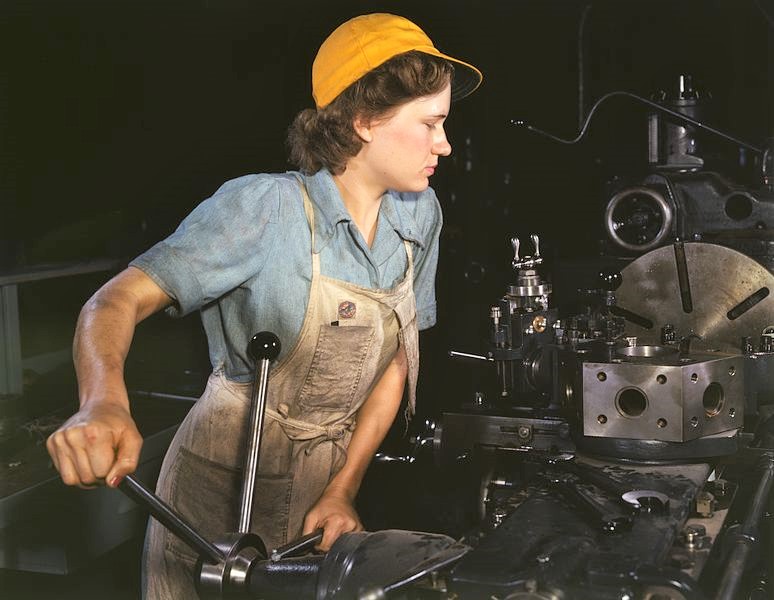 Part of today's International Women's Day celebrations are for the continuing employment advances by women. Our 21st century progress is due in large part to the pivotal roles of female employees in traditionally male jobs, like this woman machining parts for transport planes at the Consolidated Aircraft Corporation plant in Fort Worth, Texas, in 1942. (Photo via Wikimedia Commons)

Back in 2017 when Congress was formulating the comprehensive tax law changes that would become the Tax Cuts and Jobs Act (TCJA), the #MeToo movement was in full force, shining a light on the prevalence of sexual assault.

As the TCJA took full effect in 2018, the follow-up Time's Up movement was gaining ground, expanding the conversation and global consciousness about the obstacles women encounter daily in their personal and professional lives.

Those movements even made their way into the tax reform law as what was dubbed the Weinstein Tax, a reference to film producer and alleged serial harasser Harvey Weinstein.

Essentially, the new tax provision eliminated the existing law that allowed payouts and legal fees resulting from these types of cases to be written off as business expenses.

The move was applauded by women (and men) who were given such hush money payouts, as well as those who support their efforts to fight back and recover from such abuse.

The prevailing argument was that perpetrators of the sexual harassment settlements should not benefit, via tax deductions or any other ways, from their efforts to keep their bad acts secret.

Unintended tax break consequences: However, soon after the TCJA became law in late December 2017, a potential unintended consequence was discovered.

Many readers of the no-tax-deduction provision noted that since section 162(q) states that no deduction is allowed "under this chapter," the new law might be seen as applying more broadly.

Specifically, they feared that the TCJA provision also could prohibit recipients of an NDA settlement from deducting their attorney fees."

Obviously, that was not the intention of the law. It was designed to punish the harassers, not their victims. But as often happens when laws, and particularly tax laws, are hurriedly written, such misinterpretations appear.

The Internal Revenue Service has clarified the impact of section 162(q).

Victims' claims OK: On the IRS FAQ regarding the new provision, and which the IRS pointed out in its weekly mailing to tax professionals, the agency says:

Question: Does section 162(q) preclude me from deducting my attorney’s fees related to the settlement of my sexual harassment claim if the settlement is subject to a nondisclosure agreement?

That's good. Victims never should be punished for getting at least some sort of restitution.

That intent was clear from actions taken by several members of Congress following the enactment of the TCJA and discovery of the potentially harmful application of the harassment provision to victims.

Note, however, the IRS' use of the phrase "if otherwise deductible."

As tax attorney Robert Wood notes in his piece for Forbes:

"The tax treatment of litigation damages is varied and complex. But the rule for compensatory damages for personal physical injuries is supposed to be easy. They are tax free under Section 104 of the tax code. Yet exactly what is 'physical' isn't clear. For that reason, many sexual harassment victims where there is little or no physical contact usually have to pay taxes on their recoveries. … That means plaintiffs must figure a way to deduct the fees, which the IRS has just confirmed they can in the recent FAQ."

Basically, this would mean that the attorney's fees would come out of any taxable settlement, reducing the amount to which the tax collector is entitled.

Update, March 9: Jay H. Guttman, a New York City area CPA, also pointed out over on my LinkedIn where I also shared this post that the harassment victim's claim could be made as an above-the-line deduction. "Section 62(a)(20) allows an above-the-line deduction for attorney's fees and court costs paid by a taxpayer in connection with any action involving a claim of unlawful discrimination," notes Guttman. Thanks!

Obviously, in addition to the lawyer for the sexual harassment case, a victim should hire an attorney who's well-versed in the tax implications of legal settlements.

Also, according to Parillo's article, former House Ways and Means Committee Chairman Rep. Kevin Brady (R-Texas) introduced a TCJA technical corrections bill on Jan. 2, his last day as head of that tax-writing panel before Democrats took control of the chamber, that would have cleared up the confusing sexual harassment tax deduction limitation.

That bill, too, is stalled in the current Congress.

But again, no worries. With the IRS clarification, the TCJA sexual harassment no tax deduction provision now properly applies only to those committing such abhorrent acts.

And the tax move comes just in time for today's (March 8, 2019) celebration of International Women's Day.