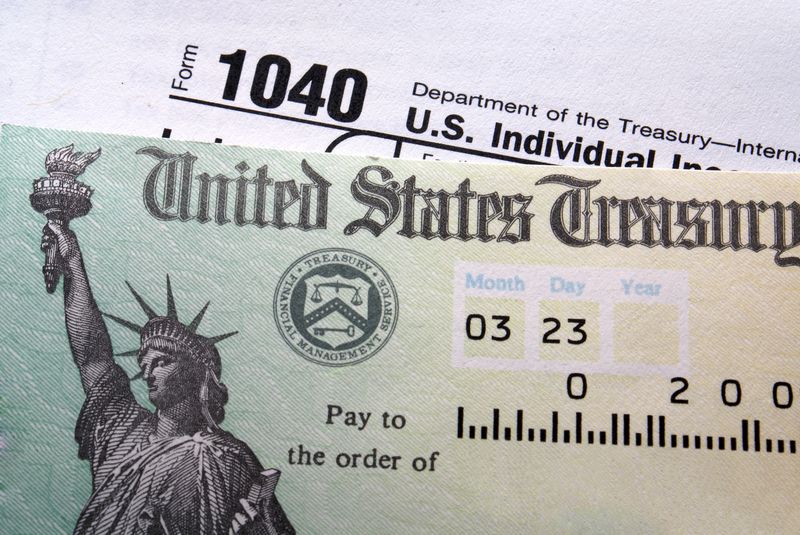 We've got just more than three weeks before our 2018 tax returns are due, but most of us aren't in any hurry to complete this task.

In fact, the IRS latest filing season data shows that 9 of 12 tracked areas are still slightly behind last year's pace.

Only visits to IRS.gov, tax returns directly e-filed by taxpayers and directly deposited refunds are up over 2018 numbers by 11.2 percent, 1.3 percent and 0.1 percent, respectively.

Refunds still a bit smaller: The amount of all refunds, however, regardless of how delivered, is still an issue.

The average amount of those incrementally more refunds that so far have gone straight to filers' back accounts is smaller. It's $3,065 this year vs. $3,091 last year.

Of course, as the IRS, Treasury and long-time tax watchers point out, we can't put too much stock in partial filing season figures.

But this smaller refund trend has bedeviled the IRS and could cause political problems for proponents of the Republican tax reform bill, the Tax Cuts and Jobs Act (TCJA).

New tax law's effects: The TCJA was signed into law by Donald J. Trump on Dec. 22, 2017, with most of the measure's tax cuts and other changes taking effect for the 2018 tax year.

That means that this filing season is the first time that taxpayers are realizing the effects of the new law. It's not been a pleasant encounter for many.

Folks who expect refunds, sometimes sizable ones, typically file their taxes early. That happened this year, but for some the anticipated refunds didn't materialize.

Part of it was because these taxpayers didn't adjust their withholding in 2018 to account for TCJA revisions. They should have. The IRS and media outlets, including the ol' blog, encouraged them to do so.

But I totally understand. Few of want to deal with taxes any more than we have to, which for most folks is filing their returns once a year. Now they're paying the price with smaller refunds and, in some cases, tax bills.

The refund situation also was complicated by the IRS decision last year to withhold less from employees' paychecks.

That gave workers more money based on the new lower tax rates, but on the back end it reduced the amount they would have instead received this filing season as refunds.

Refund anger reflects on Republicans: Unfortunately for the GOP, which pushed the tax bill through without any Democratic Congressional support, the refund issue is causing a public relations problem.

Despite having an overall lower tax bill under the TCJA — analyses from both sides of the political aisle have found that the new law gave most Americans a tax cut, with only a few families paying more than they did under the old law — many Americans are not happy with how the law's implementation cut into their refunds this year.

A new poll by SurveyMonkey for The New York Times found that nearly four in five people would rather overpay their federal income taxes and get a refund every spring — effectively making an interest-free loan to the government — than under pay and owe money come tax season.

The New York Times' article on the poll and how folks view the new tax law because of the size of their current refunds gets this weekend's Saturday Shout Out.

Underwithholding and penalty issues: Regardless of why folks ended up withholding too little, the real-life effect could cost them more than just a smaller refund.

If you don't have enough withheld and end up owing Uncle Sam when you file, you also could face a tax penalty and interest on the taxes you should have paid throughout the last year.

The penalty typically is triggered when what you pay in one tax year fails to meet a percentage of your tax year liability the year before.

Be careful here. Your tax liability is the taxes you owe — that's line 15 on the new Form 1040 —  before you subtract the payments noted above, not the end result of any additional tax you might owe, which now shows up on line 22.

Normally, the IRS looks for you to pay through withholding, estimated tax payments or a combination of the two payment methods at least 90 percent of your prior year's final tax bill.

Just before filing season officially started this year, it announced it was reducing the amount of unpaid tax that would trigger the penalty assessment from 90 percent to 85 percent.

After prodding from Congress, Treasury and the IRS announced Friday, March 22, that they are lowering the withholding underpayment threshold to 80 percent to give more taxpayers relief from tax penalties they might face by not adjusting for TCJA changes.

"We heard the concerns from taxpayers and others in the tax community, and we made this adjustment in an effort to be responsive to a unique scenario this year," said IRS Commissioner Chuck Rettig. "The expanded penalty waiver will help many taxpayers who didn't have enough tax withheld. We continue to urge people to check their withholding again this year to make sure they are having the right amount of tax withheld for 2019."

Software revision: The IRS also noted that this revised 80 percent penalty computation threshold will be integrated into commercially-available tax software, as well as be reflected in the forthcoming revision of the instructions for Form 2210, Underpayment of Estimated Tax by Individuals, Estates and Trusts.

If you've yet to file and plan to use software to do your taxes, make sure you get the update to the program before filing so that any possible underwithholding penalty is calculated properly.

Refunds for early penalty filers: There's also some good news for folks who filed their 2018 returns and paid an underwithholding penalty under the initial 85 percent penalty trigger.

In these cases, the IRS says if you now qualify for this expanded relief, you can claim a refund by filing Form 843, Claim for Refund and Request for Abatement.

This form must be downloaded and filed the old-fashioned snail mailed paper form way. Also be sure to include the statement "80% Waiver of estimated tax penalty" on Line 7 of Form 843.

Adjust your 2019 withholding: Finally, if you owe (or owed) or will get (or got) a large refund this filing season, take the IRS advice and adjust your withholding now.

The IRS' online withholding calculator, updated to reflect the TCJA changes, can help you determine the information to put on the new W-4 form so that the correct amount of tax will be taken out of your pay.

You want to get that number right because the penalty trigger for the 2019 tax return you file next year will be back up to 90 percent of your 2018 tax liability.

You don't want to find yourself in a penalty situation (again), especially when it will be easier for the IRS to tack on the added underwithholding cost.

Compare your total tax for 2018 vs 2017. All things being relatively equal you have paid less tax in 2018.
If you received more cash in your paycheck during the year how can you complain about a smaller refund?
Don't complain; be aware of what is happening for all 52 weeks of the year.