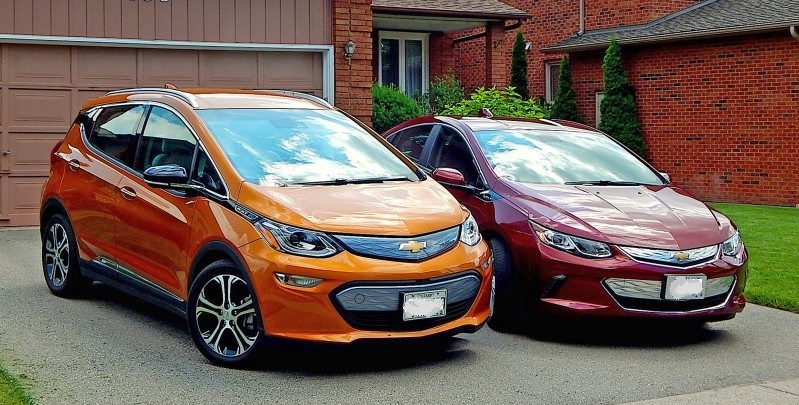 Tax credits for buying a Chevrolet Bolt, left, or Volt are going down on April 1. (Photo courtesy Driving Canada)

The climate change debate rages on in political circles, but on U.S. roadways, many folks are voting, as the old saying goes, with their pocketbooks. They're buying more energy efficient and less polluting cars.

And Uncle Sam has been part of that sales campaign.

A federal tax credit that can be as much as $7,500 has convinced some Americans to trade in their gas guzzlers for electric autos.

That tax break, however, doesn't last forever. Once an electric vehicle becomes popular, based on its total number of sales, the tax credit is reduced.

That happened first to Tesla, which lost some of its credit value on Jan. 1.

General Motors joins the more sales/less tax break club in less than a week. The credit for its electric vehicles, the most popular of which wear the company's Chevrolet bowtie badge, will start phasing out on April 1.

But more mainstream U.S. car companies are following the Tesla route, albeit while hedging their bets.

American drivers remain committed to SUVs, in part because gas prices have been relatively low for years, so the U.S. auto industry has shifted its production to those models.

However, smaller and less fossil fuel dependent vehicles are popular globally. To compete in those markets, American automakers also are keeping some electric vehicles, referred in the industry as EVs, on their assembly lines.

They're hoping that U.S. drivers, at least those in more congested cities, will eventually trade in their large autos for the smaller EVs.

Government help for domestic market: In the short-term, Uncle Sam has been helping underwrite that U.S. EV sales plan.

The Energy Improvement and Extension Act of 2008 included a tax credit for, in the legislation's words, plug-in electric drive motor vehicles. Over the years, the credit has been extended, basically offering EV buyers a tax break for purchasing eligible passenger vehicles and light trucks.

It's not a perfect sales solution. The tax credit doesn't affect an auto's purchase price, but rather the buyer collects it against his or her taxes when filing a tax return the year after buying the EV.

But it still is used as a sale pitch. And the opportunity to reduce your overall tax bill by as much as $7,500 — remember, a tax credit offers a dollar-for-dollar reduction of the total tax you owe — for buying an IRS-approved EV could help convince a buyer to choose one electric car make over another.

More sales means smaller credit: All good things and many tax breaks, however, eventually must end. That's the case for EV credit, which is losing its value for Teslas and Chevy Volts and Bolts.

Like the tax credit for hybrid vehicles upon which the EV break was based, the all-electric auto tax credit is phased out once a car maker hits certain a specific sales mark. For EVs that's 200,000.

Last year, Tesla became the first to face the credit phaseout when it reported to the IRS that it had sold more than 200,000 EV-credit-eligible vehicles eligible during the third quarter of 2018.

Tesla credit reductions schedule: That triggered the start of Tesla's credit phaseout, beginning with EVs sold on and after Jan. 1, 2019. From the start of this year through June, the Tesla tax credit will be $3,750.

On July 1, the credit will be reduced to $1,875 for the remainder of the year. After Dec. 31, Tesla buyers won't get a federal tax credit.

You basically have this week to get the full $7,500 tax credit for buying a new Chevy Bolt or Volt. Come next Monday, April 1, the credit for qualifying GM electric cars will be halved.

Also affected by the credit phase out are the Chevrolet Spark EV, Cadillac ELR and Cadillac CT6 Plug-In.

Political fight ahead: The phaseout of the credits could be the least of the EV market's problems.

Many on Capitol Hill are opposed to the tax breaks. Some don't think it's a good general tax policy. Other think the auto industry has received enough help in recent years. Some believe the credit is a costly sop to the climate change sector.

Congressional Democrats have leaned toward making the credits unlimited or extending them for another period of time to renew the benefits for successful EV producers like GM or Tesla.

House and Senate Republicans tend to favor ending the EV program, although some int he GOP have argued for one final renewal period so that they will uniformly expire next decade.

Donald J. Trump has chosen his side. Trump's latest federal budget proposal calls for an end to the credit. The budget's argument is that it would save the United States $2.5 billion in the next 10 years.

If, however, you are committed to an electric auto and don't want to wait on the fate of the EV tax credit, you probably should act now. Like this week if you're leaning toward an electric Chevy.