Don't forget about your state taxes 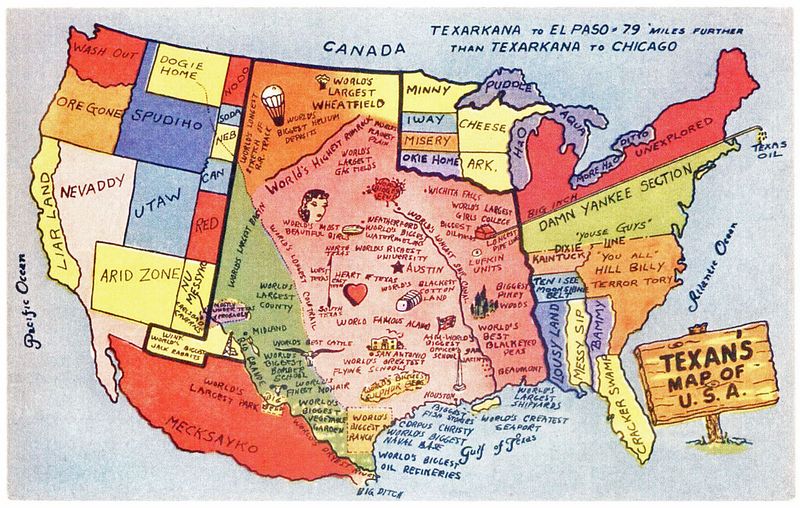 I admit it, as a native Texan I get a kick out of this depiction of Lone Star State residents' skewed point of view of the United States. Click the image for a larger view of the map, which was part of a calendar I bought at Marfa Book Company while revisiting my West Texas roots a few years ago.

Here on the ol' blog, I tend to focus on federal tax filings. That's because almost all of us at some point in our lives have to file paperwork with the Internal Revenue Service.

But there also are state, and in many cases local, taxes.

The hubby and I were introduced to these additional levies when we moved from our native no-income-tax Texas to Maryland. We handed over extra money every April to the Old Line State and our suburban Washington, D.C., county for almost two decades.

Then we moved to Florida and got back into the no-income-tax swing of things. And then back home to Texas. Still, we remember the added tax tasks we had to handle every spring.

We've been fortunate to not have to deal with state taxes for much of our filing lives. But believe me, Texas and Florida got their cuts via sales and property taxes.

7, and soon 8, no-tax states: Joining us and our current and former neighbors in the Lone Star and Sunshine States in not having to pay state taxes on wages are residents of Alaska, Nevada, South Dakota, Washington and Wyoming.

Tennessee soon will be the eighth state with no income tax. Right now, it — along with New Hampshire — collects tax only on interest and dividend income, not salary earnings.

The Volunteer State's Hall Tax on certain investment earnings is being phased out and is scheduled to be eliminated by 2021.

Quick Tennessee tax aside: The end of the Hall Tax is a big deal. It's been on the state's books since 1929, when it became law thanks largely to the efforts of the state senator for which it is named, Frank S. Hall.

Soon there will be nine: New Hampshire doesn't collect a tax on wages, but does get a cut of its residents' interest and dividend income. But that's being phased out.

The Granite State will become the ninth no-income-tax state when its unearned income tax ends on Jan. 1, 2027.

Where and when state taxes are due: For most folks, however, filing an added return each spring is just a way of life.

I try to keep up with state tax matters, but since there are 50 states, plus the District of Columbia, and just one of me, these jurisdictions sometimes get somewhat short shrift here at the ol' blog, at least when it comes to specific filing responsibilities.

However, state taxes are getting a renewed focus this filing season since it's the first one in which we're dealing with the effects of the federal Tax Cuts and Jobs Act (TCJA).

Conformity tax factors: The TCJA is important to states because most that do collect income taxes rely in some form on their residents' federal tax returns.

This conformity as it's known will determine how and how much the federal tax reform is felt at the state level.

Rolling conformity is used in 18 states and the District of Columbia for individual income taxes, and in 22 states for corporate taxes, according to Merrill E. Barter, CPA, in a piece for The Tax Adviser.

If the conforming states don't want to follow the TCJA changes, they must take action to decouple from the federal tax code.

There's also static conformity, which applies in 19 states as far as individual filers and in 21 when it comes to corporate income taxes, writes Barter.

Barter's article for the AICPA newsletter earns this weekend's Saturday Shout Out. He, and his editor CPA Catherine Stanton, take a deep dive into the complexities of the federal and state tax connections vis-à-vis the first major IRC rewrite in more than 30 years.

Surfeit of state tax shouts out: But wait, there's more.

The Tax Policy Center (TPC), a joint venture of the Urban Institute and Brookings Institution, has a comprehensive collection of ways the new federal tax laws impact states (and their taxpayers) at its special section on States and the Tax Cuts and Jobs Act.

So shout out to TPC, too.

But wait, there's even more.

The Institute on Taxation and Economic Policy (ITEP) put together a policy brief that looks at what the TCJA means for states and offers a guide to the impacts and options.

So there it is. The ol' blog's first-ever triple Saturday Shout Out.

If the specifics on state taxes and how they are affected by federal tax laws in general and the TCJA changes in particular appeal to you, enjoy reading these articles.

State tax filing highlights only: If, however, you just want some help on filling out your state tax return, let me direct you to the ol' blog's separate page with links to each state's and D.C.'s official tax department websites. 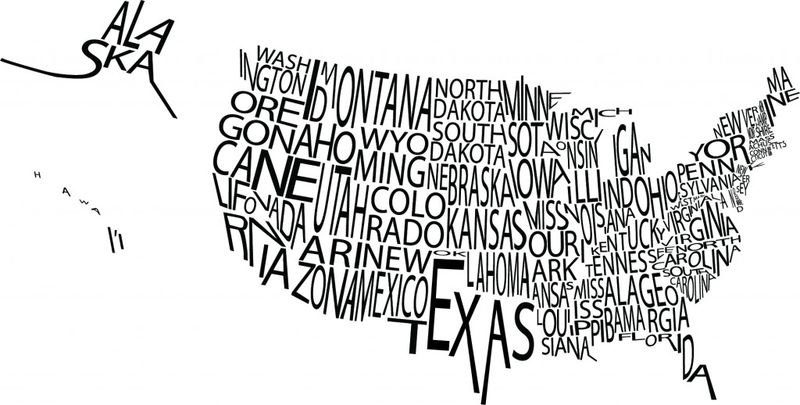 The state tax sites list is alphabetical, and yes, I use the real states, not those in the Texan's map of the U.S.A. that's atop this post.

In addition to the links to the 51 states+D.C. revenue offices, you'll also get a quick reminder of when your state taxes are due. Hint, most but not all follow the IRS' April deadline.

I know I could have added more, but as I noted earlier, 50 states and D.C. and just one me.

Plus, the state tax sites are, for the most part, pretty useful. That hasn't always been the case.

Back in 1999 when my writing turned to primarily taxes, only a handful of state tax offices were online so it took a while, and lots of calls, to find what you needed on the state or local level.

Nowadays, though, as we're migrated much of our lives, including taxes, online, state tax officials have taken the hint. Many of the state tax sites are outstanding, both in the material they present and the ease of use.

So click on over to your state's tax office. Find out specifics on your filing responsibilities and, in many cases, how you can do so at no cost right there on the state tax Web page.

And if you want more state tax news and info, you can also check out the State Taxes tab at the top of the page or go directly to the listing of all blog posts that have any info on or connection to state taxes.