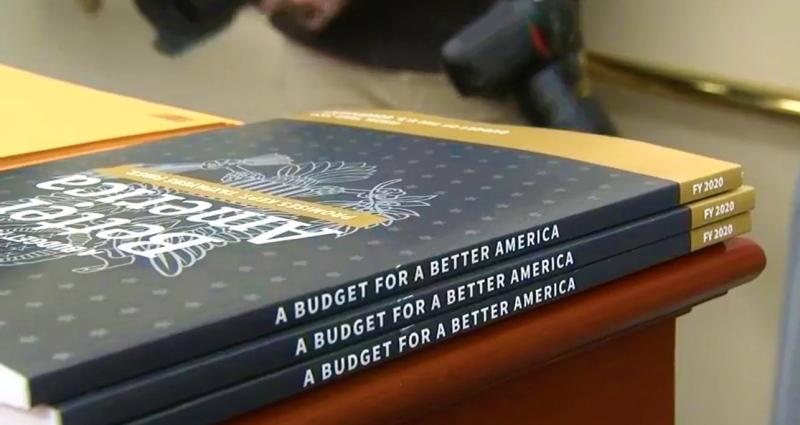 The Trump White House today released its fiscal 2020 budget request. The annual fiscal request for money is a month later than usual this year because of the 35-day government shutdown.

In his latest budget proposal, Donald J. Trump asks for $8.6 billion for the border wall. He's also calling for spending cuts of $2.7 trillion, the largest proposed reduction ever by an administration.

The math involved also is monumental. The budget forecasts trillion-dollar deficits for four straight years, starting in 2019. It would not be balanced for 15 years, although during the 2016 presidential campaign Trump had promised to pay off the entire national debt within eight years.

Before you start perusing those items or the full 150-page budget, titled "A Budget for a Better America," here are a few things to remember.

Every president's annual fiscal budget proposal is just that, a proposal. It's really a wish list and/or campaign tool, outlining an administration's policy preferences by asking Congress for more money for them.

It is, in fact, Congress that control actual federal spending levels.

That's why, with Democrats in control of the House, Trump's latest budget has been described (as have many others by previous commanders in chief) as dead on arrival.

Still, it's a helpful exercise to look at presidential fiscal hopes and dreams. Sometimes portions of budgets are reshaped into a form that actually makes it into law.

IRS funding increase: One area of Trump's 2020 budget that might get some Democratic support in both the House and Senate is its increased funding request for the Internal Revenue Service.

Trump's proposal seeks $11.5 billion for the IRS in the upcoming fiscal year. That's slightly more, in relative budget big bucks levels, than the amount sought by Trump last year ($11.1 billion) and the $11.3 billion that was eventually appropriated by Congress for fiscal year 2019.

Another $290 million of the proposed 2020 budget amount is targeted for the IRS' information technology (IT) modernization efforts.

IRS commissioners for years and under all administrations, Republican and Democrat, have bemoaned the shoddy shape of the country's tax collecting technology system.

The need for IRS IT upgrades also has been a focal point of recent National Taxpayer Advocate reports.

Taxpayer Advocate Nina Olson's latest list of legislative actions Congress should take with regard to the nation's tax collection agency was led by her recommendation that lawmakers provide the IRS with additional dedicated, multi-year funding to replace its antiquated IT systems.

From Advocate's lips to budget ears: Apparently, someone at the White House was listening to Olson.

The administration's TY2020 budget, in a section it calls an investment in a 21st century IRS, outlines its coming fiscal year funding plans for the tax agency. It says:

The IRS collects approximately $3.5 trillion in tax revenue annually and processes more than 253 million tax returns and forms resulting in more than $464 billion in tax refunds. The Budget proposes $11.5 billion in base funding for IRS to ensure that IRS can fulfill its core tax filing season responsibilities, continue critical IT modernization efforts, and provide acceptable levels of taxpayer service.

The Budget also proposes legislation enabling additional funding for new and continuing investments to expand and strengthen tax enforcement. These additional proposed investments are estimated to generate approximately $47 billion in additional revenue at a cost of $15 billion, yielding a net savings of $33 billion over 10 years. The Budget also includes several proposals to ensure that taxpayers comply with their obligations and that tax refunds are only paid to those who are eligible, including: improving oversight of paid tax preparers; giving IRS the authority to correct more errors on tax returns before refunds are issued; requiring a valid Social Security Number for work in order to claim certain tax credits; and increasing wage and information reporting.

The Budget provides $290 million for the IRS’s multiyear IT modernization efforts, including upgrading its antiquated infrastructure and integrating its multiple case management and tax processing systems. Approximately 90 percent of individual taxpayers file their taxes electronically and can check on the status of their funds electronically. However, for most other taxpayer interactions, taxpayers and the IRS must interact through the mail, which slows the resolution of issues. These funds would also be used to increase taxpayers’ ability to interact with IRS securely and electronically, improving the time it takes for IRS to resolve concerns.

The latest budget, said Mnuchin, "ensures Treasury has sufficient resources to continue implementing the country's most comprehensive tax reform" and "reflects Treasury's commitment to greatly modernize the IRS's IT infrastructure to advance cybersecurity, safeguard taxpayer data, and improve taxpayer experience. The integrity of the voluntary tax compliance system depends on it."

Will Congress agree? While the IRS has taken some hits in recent years, especially from Republican members with axes to grind over the agency's 501(c)(4) tax-exempt status requests (aka the IRS/Tea Party scandal), the agency could finally be getting a bit more consideration.

The IRS has made efforts in those areas, easing some Congressional complaints.

But there's also a flat-out practical, pragmatic factor for why some lawmakers are looking at giving the nation's tax collector and tax law enforcer more money.

The ability of the IRS to effectively collect as much tax money as it is owed is critical every budget cycle. That revenue is even more vital when we're looking at Uncle Sam running on even more borrowed dollars.

I worked with IRS from 1979-1984. The audits they do now are very limited. Mail audits are worthless on many accounts. Fake documents are easy to produce nowadays. Triple the IRS budget by building a few less government planes, ships and equipment for the military. The military will complain. But then who's challenging the USA in the world today? No one is challenging the USA that can back up their threats. More IRS means more $$$ in federal coffers for other uses. The crooks and cheaters won't like it, but we can always send them to prison for their lawlessness.