How to get tax help for your natural disaster losses

Some of the destruction from a tornado, preliminary estimated to be an EF-4 with winds reaching 170 mph, that touched down on March 3, 2019, in Lee County, Alabama. (Photo courtesy National Weather Service, Birmingham via Twitter)

Mother Nature showed her extremely mean side this weekend, with tornadoes in Alabama, Georgia, South Carolina and the Florida panhandle leaving a path of death and destruction.

I know that folks just now getting a good look at the havoc are not in a mood to think about taxes. That's especially true of those in who lost loved ones when a twister roared through Beauregard, Alabama.

But when it is the appropriate time, folks affected by this most recent weather tragedy, and anyone who might encounter similar natural disasters, should look into the possibility of getting some help through claiming their losses on their taxes.

Here's an overview of the process works.

Major disasters only: First, we've got to look at how changes under the Tax Cuts and Jobs Act (TCJA) affect property loss tax claims.

Previously, many types of common uninsured losses could be claimed. This included damages from a house fire, auto accident or property stolen by a burglar.

Now the TCJA says that only losses attributable to major disasters can be claimed.

These are cases when the president declares the effects of a natural catastrophe major. The White House will make the announcement, enabling the Federal Emergency Management Agency (FEMA) to start the assistance process.

In addition to the FEMA aid, affected folks can look into whether they can get additional help via the tax code.

FEMA maintains a list of disasters, as does the Internal Revenue Service on a state-by-state basis at its Around the Nation page. If your area sustains damages from storms, check those sites periodically (and here, too) for updates on status classifications and associated available government and tax assistance.

Tax time shifting still allowed: Although the types of losses that can be claimed are more limited, in these cases some potentially tax-valuable options remain.

Qualifying taxpayers still have the ability to claim major, presidentially-declared disaster losses on either their prior year tax return or on the return they'll file for the year in which the disaster occurred.

This choice lets folks compare which filing will produce a better tax result.

The prior year filing typically is done by completing an amended Form 1040X return and sending it to the IRS as soon as you can.

In some cases, claiming disaster losses as an itemized deduction on the previous year's tax return gets filers bigger refunds.

Just as — or sometimes more important — claiming the losses for the prior year will get the tax money to affected taxpayers sooner, meaning they can use it to speed up recovery efforts.

Problems with prior (or any) year disaster claims: But time-shifting federal disaster casualty losses to the previous year is not the best move for all taxpayers.

Some storm victims might find that while their losses are substantial, they aren't enough to meet two tax-law limits on casualty claims.

First, you must reduce the amount you can claim by $100. Then, you have to reduce the total of all your casualty losses by 10 percent of your adjusted gross income (AGI). You also have to subtract any insurance money you got for the loss.

This means that you'll want to look at your earnings for the tax year in which you'll claim the loss. If you had or will have less income in the prior year vs. the current one (or vice versa), then that's the one you want to use so that you'll face a lower 10 percent AGI reduction of your loss claim.

Also, the TCJA generally throws a wrench into itemizing. The new tax law dramatically increased the amount of the standard deduction for all filers. Unless you have substantial uninsured major disaster losses, it might not be worth filling out a Schedule A to make the storm-related claims for any year.

So carefully evaluate your individual circumstances — tax, damage and financial recovery needs — before deciding whether and when to make the storm claim.

In situations where disaster victims determine that their damage claims would be more tax valuable on the return for the year in which they actually occurred, then by all means wait to itemize the losses on the return you file next year.

Filing steps: OK. You've decided that claiming your disaster losses is worthwhile. You've picked the tax year in which you want to make the claim.

Here's the paperwork you'll have to submit.

To claim disaster losses, you file the new TCJA-revised Form 1040 plus Schedule A to itemize your loss deduction.

You'll also have to fill out and file Form 4684 to figure and report your casualty loss.

And, as noted in deciding when to file, if you opt to an amended return to claim losses in the prior tax year, you'll file Form 1040X instead.

Calculating claim values: Then you must determine how the damage has hurt your property's fair market value. This is a two-part valuation: what your property was worth immediately before the catastrophe and what it's worth after.

The pre-disaster value is your adjusted basis.

For real estate, this usually is the cost of the property plus certain adjustments, such as improvements that add to the structure's value. You can find more on this process in post Home basis, not market value, key amount in calculating disaster loss tax claim. 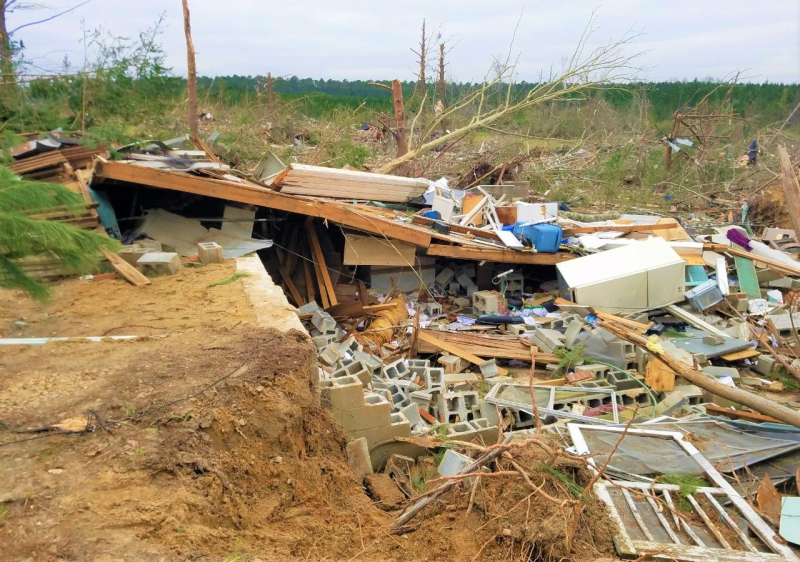 If you're claiming a vehicular loss or other personal property, the adjusted basis may be determined by the depreciation that reduces the auto's or property's value.

An appraisal of your property's post-disaster value can help here. Compare that amount to your adjusted basis and the difference between the two amounts is your loss from the casualty.

Once you've determined your loss, use Form 4684 to figure the deductible amount of your casualty loss.

You must reduce the initial loss claim amount by any insurance or other reimbursement you have received. This also is where the aforementioned $100 reduction and 10 percent of AGI come into play in determining your final casualty loss deduction.

Deduction doesn't equal tax refund: Now it's time to figure out the actual tax value of your loss deduction.

Remember, the total amount of real estate, personal property and car damage losses you detail on Schedule A and transfer to your Form 1040 or 1040X doesn't directly translate to the amount of whatever tax refund you'll receive based on the disaster loss claim.

Just as you do every time you file a return, you must figure your taxes. This time you do so using the disaster loss deduction to determine just how much tax-wise the loss will help you'll get back as a refund.

Yes, it's not an easy process.

Yes, that's particularly frustrating when you've already been hassling with the real-life tasks of recovering from a disaster.

But a tax professional or tax software can help you make it through the process. And the result could be a positive tax refund payout that makes it worth the trouble.

Good luck, with both making your disaster claim and getting your life back to normal as quickly as possible.