Most serious problems taxpayers face in dealing with IRS

The National Taxpayer Advocate this year selected 21 major problems that taxpayers encounter in their dealings with the Internal Revenue Service. I found five of those issues particularly troublesome.

Every year, the National Taxpayer Advocate issue a report to Congress. The 2018 version released this week included a look at, not surprising, how the recent government shutdown affected not only Internal Revenue Service operations, but also the taxpayers who, particularly at this time of year, are relying on IRS services.

Part of that annual report also includes at least 20 tax matters that the Taxpayer Advocate identifies as the most serious problems that taxpayers face in their dealings with the IRS.

Olson reviews a wide variety of tax matters that cause millions of taxpayers to go hmmm (or worse) when they must touch base with the IRS, either of their own volition or when the tax collector comes calling. These range from getting tax information to paying taxes or getting refunds or, more central to the Taxpayer Advocate Service's mission, whether taxpayers' basic rights have been hampered or violated.

First, though, I wanted to take a closer look at five the top taxpayer problems that caught my eye.

The Internal Revenue Code (IRC) is a massive document. Size, however, is not the only issue. It's constantly complicated by legislative tweaks — sometimes timely, some not so timely (retroactive changes, anyone?).

The most recent revision was the sweeping the Tax Cuts and Job Act (TCJA), passed in December 2017. The TCJA is the most comprehensive tax reform since 1986 and this is the first filing season that taxpayers are submitting 1040s (which itself has been redesigned) under these myriad changes.

The IRS surely will face lots (and lots and lots) of questions about the TCJA this year. But Olson says that's not the only issue. She says the agency is missing a huge opportunity to be of service year-round.

Since 2014, she notes, the IRS has been operating under a policy that calls for its representatives to only answer tax law questions during the main filing season, or basically from January through mid-April of the year. It justified this abrupt change in policy as a cost-savings effort in a time of budget constraints.

However, says Olson, taxpayers have ever-changing tax situations throughout the year:

"People move, open a business, close a business, get married, get divorced, have children and experience many other life changes that affect their tax obligations.  Forcing taxpayers into a 3.5-month window to ask questions or making it necessary for them to seek advice from a third-party source can be frustrating and costly to the taxpayer and result in eroded trust and confidence in the IRS."

Olson's right. Tax issues crop up year-round. And the IRS needs to improve its training and access to knowledgeable staff who can help taxpayers get the answers to fulfill their tax responsibilities whenever they need it.

Even when taxpayers are provided with a specific phone number, most often it is for a group, rather than for an individual employee. These group numbers make it difficult for taxpayers to have a sense of continuity and rapport with the personnel working their cases.

In addition, says Olson, much taxpayer frustration in obtaining the answers they see is due to the fact that they prefer different methodologies of assistance for different issues and tasks. The graph below, taken from the Taxpayer Advocate's report, illustrates those preferences: 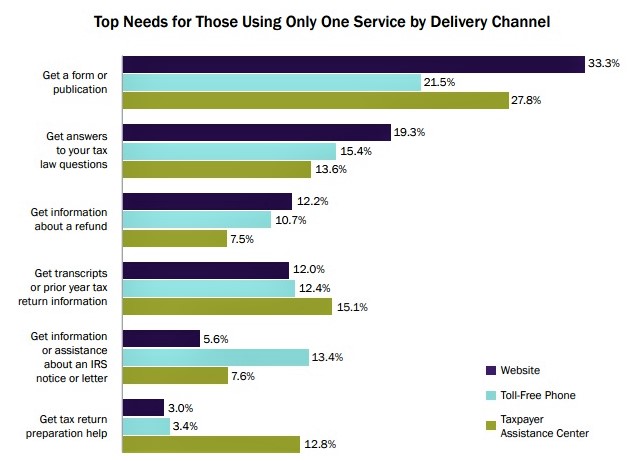 But the IRS, according to Olson, ignores these preferences. Instead, the agency does its best to push everyone into a "one size fits all" virtual environment. This effort, typically justified by the desire to preserve resources, has resulted in the ongoing closure of Taxpayer Assistance Centers (TACs) and substantial limitations placed on when taxpayers can receive answers to tax law questions.

I've got to admit that I love IRS.gov. I use it all the time. And in most of my life, I tend to look for solutions that require minimal contact with others. I save such interactions for interviews that I conduct or give, which I do enjoy.

But I also realize I'm the outlier here, and Olson's point about wider contact options regarding tax issues is well made.

When the IRS allows a taxpayer's erroneous claim of the Earned Income Tax Credit (EITC), it makes an "improper payment." The IRS estimates that 25 percent of the EITC credits it allowed in Fiscal Year (FY) 2018 were improper payments (23.4 percent when considering improper payments the IRS recovered). A principal cause of the EITC improper payment rate is the complexity of the rules for claiming EITC, yet the IRS does not provide a dedicated telephone help line available year-round for taxpayers to call with questions about EITC.

The IRS estimates that 25 percent of the claimed EITC credits it allowed in fiscal year (FY) 2018 were improper payments. The IRS’s attempts to reduce the EITC improper payment rate have met with limited success. While Olson recognizes the importance of tracking and minimizing improper payments, the National Taxpayer Advocate is concerned that the focus on "a number" masks both the successes and challenges in improving EITC compliance.

The EITC is a good way, in theory, to help low- and moderate-income individuals and families lower their taxes and in many cases get a refund if they don't owe. It also is way more complicated than it should be, posing legitimate claiming problems for honest taxpayers, many of whom don't get help in filing, as well as crooks, both individual tax cheats and unscrupulous tax preparers, who use it to file fraudulent EITC claims.

Any actions the IRS takes to improve EITC claims and issuance of correct credit amounts is welcome. But that's treating the symptom. The main illness is the complexity of the EITC.

"The estimated amount of improper payments also does not take into account that many taxpayers who appear to be eligible do not claim Earned Income Tax Credit (EITC). The Treasury Inspector General for Tax Administration estimated that … for every dollar of EITC improper payments, there were 40 cents of unclaimed EITC."

As the comment above from Olson's report notes, while the EITC is abused, it also isn't claimed by many who could benefit from the tax break. The IRS has tried for more than a decade to educate taxpayers, notably its annual EITC Awareness Day, about the EITC and encourage them to claim it.

But the real solution needs to come from Congress. Federal lawmakers had tried to make tax professionals the EITC police over the years, but the House and Senate need to step up. Congress should re-examine the EITC and explore ways to make it easier for the workers for whom it was created to claim.

4. Free File: The IRS' Free File offerings are underutilized, and the IRS has failed to set standards for improvement.

Despite Americans' use of more electronic options for all areas of their lives in recent years, participation in Free File has steadily declined. Olson says the IRS is devoting minimal resources to oversight and testing of this program to understand why taxpayers aren't using it and how the services offered could be improved.

Some still argue that the free tax prep and e-filing program would work better if the IRS took it over from the private sector. I disagree. That would require money that Congress has not been eager to give the IRS. It also would require more personnel, again which would cost money that lawmakers don't want to authorize or allocate.

Also, the private tax industry does a pretty good job here. And there continues to be competition to keep the software manufacturers on their toes.

But I do agree that the IRS needs to work with the Free File Alliance to expand marketing of the IRS-based free tax prep and filing program. The biggest hurdle here would be convincing the private software companies, many of which offer some sort of free option themselves, to direct folks who might one day be paying customers to the IRS website. I don't see that happening any time soon.

The IRS implemented its current Private Debt Collection (PDC) initiative, as ordered by Congress, in April 2017. Olson says that as of Sept. 13, 2018, about $5.7 billion in debts of more than 600,000 taxpayers were in the hands of private collection agencies (PCAs).

Essentially, says Olson, the PCA inventory is fast becoming a substitute of the IRS collection queue.

Congress mandated this latest use of private debt collectors (after three earlier failed attempts) as a way to save money. Olson acknowledges that the current PDC program revenues have surpassed program costs.

However, she says, this surplus has been achieved to a significant extent by collecting from financially vulnerable taxpayers. According to IRS databases that contain information from tax returns filed by taxpayers and reports of income filed by third parties:

Plus, while it's covering its costs and a bit more, Olson says the private tax debt collection program is not generating the revenues Congress expected. Only about a third of revenues attributable to PCA activity in fiscal year 2018 made their way to, and remained in, the government's general fund.

I'm totally with Olson here. As are many still skeptical members of Congress. Tax collection is a core IRS function. It should be done by the IRS, not by private companies who coincidentally, or not, come from the states of lawmakers who are major advocates of the private collection program.

In her extended discussions of each of these problems, cites the specific Taxpayer Bill of Rights (TBOR) that are impacted.

Do you agree with Olson's and my lists? Are there particular tax areas that pose the biggest challenge to you this and every year?