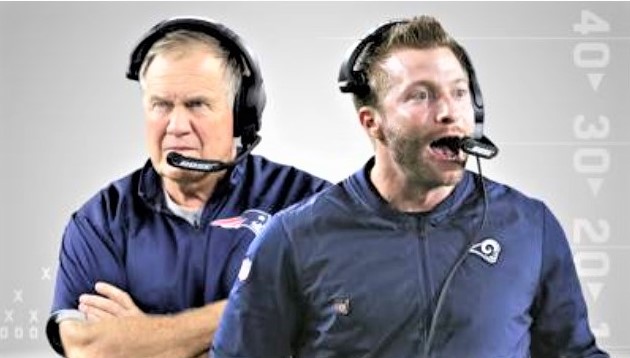 Will youthful enthusiasm prevail over old age and treachery? That's one of the things, although not in exactly those words, that you can bet on in connection with Super Bowl LIII. (Photo courtesy NFL.com)

Los Angeles Rams head coach Sean McVay, at right in the above photo, turned 33 last month. He's the youngest coach to take a team to a Super Bowl.

Across the field (and at left above) will be Bill Belichick, a veteran of National Football League championship games as the New England Patriots head coach. He's twice as old as McVay.

If the Patriots win (again), the 66-year-old Belichick will become the oldest head coach to win a Super Bowl.

That 33-year difference is today's By the Numbers figure.

One of the many Super Bowl prop bets you can put some money on today is:

Will Belichick and McVay Age Gap be mentioned during the game broadcast?

**Note: From kickoff until final whistle, halftime does not count

I'm going with yes, the coaches' 33-year age gap will be mentioned ad nauseum by the announcers calling the game. If I'm right, then my payoff for this prop bet would be taxable income.

In fact, all winning bets, be they on off-the-wall propositions only tangentially connected to the actual football game or legit on-field actions, are taxable income.

Today's myriad Super Bowl bets will be getting added attention this year. It's the first Super Bowl since the May 2018 Supreme Court decision giving states the choice to allow sports betting within their borders. 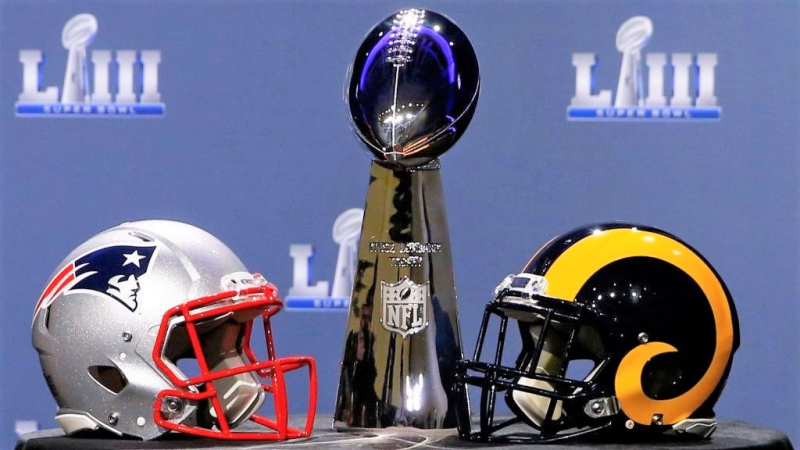 Take, for example, the bets about how much the quarterbacks will be slinging the football.

The over/under for Rams QB Jared Goff is 285.5 yards. R.J. White, NFL gambling analyst at SportsLine says take the under.

"Goff averaged 293 yards a game in the regular season, but he's gotten over 280 just twice in their last seven games, and he didn't come anywhere close in the five that missed the mark," writes White. "Plus, the Patriots have allowed opposing QBs to 280 yards or less in eight straight games heading into the playoffs, and I don't think Goff is on the level of [Los Angeles nee San Diego Chargers] Philip Rivers and [Kansas City Chiefs] Patrick Mahomes."

On the Patriots' side, the over/under for Tom Brady passing the ball is 300.5 yards. CBS Sports Senior Writer Will Brinson says take the over "even though this is a really high number for a 41-year-old man's passing yards in a Super Bowl against a Wade Phillips defense."

But, Brinson adds, Brady is averaging 292 yards per game over his last 13 playoff games and has totaled more than 970 yards in his last two Super Bowls.

Goofy game bets abound: Then there are the prop bets that get most of the attention.

These are the ones, life the McVay-Belichick age issue, that don't really have anything to do with the game.

They include such things as:

Will it take Gladys Knight (sans Pips) more or less than 1 minute, 50 seconds to sing the National Anthem?

Which song will Maroon 5 open its halftime show with? Choices are oddsmakers' favorites One More Night or Makes Me Wonder, as well as Animals, Don't Wanna Know, Girls Like You, Moves Like Jagger, Sugar, Payphone, Maps, Mic Jack and  Mic Jack and the always popular "any other song."

What will be the predominant color of Adam Levine's shoes when he begins the halftime show performance? You can pick from white, black, brown, blue, red, orange, yellow, green, purple or pink.

Personally, I'd rather see P!nk, who sang "The Star Spangled Banner" at last year's big game and came in under the prop bet's two-minute over/under limit, perform at halftime this year.

And I had more fun guessing Katy Perry's hair color when she headlined the halftime show for Super Bowl XLIX in 2015. She went with her natural brunette locks.

Will the dome of Mercedes-Benz Stadium be open at kickoff? Go with closed. It's the safe bet, both for security and weather reasons.

How many times will Giselle Bundchen be shown on TV during broadcast? The over under is 1.5 times. I'm taking the under since Mrs. Tom Brady probably will be in a stadium suite, making it harder to get good glimpses. Plus, this prop bet only covers game time, not halftime or after-game celebrations.

How many times will ebullient CBS color commentator Tony Romo say "Here we go"? The smart money is on the over side of the 2.5 prop bet line. Tony loves his catch phrases. And Tony loves to talk.

These are just a few that caught my eye. David Fucillo, gambling editorial manager for SBNation has compiled a full list of today's big game prop bets.

Props can pay off handsomely: Yes, prop bets seem silly. Until they pay off.

During Super Bowl XLVI in 2012, two wagers that many of us consider throw-away bets paid off big for Jona Rechnitz.

Rechnitz's $1,000 bet on a safety being the first scoring play of the Super Bowl returned $50,000 when Tom Brady's intentional grounding in the end zone gave the New York Giants an early two-point lead.

Then he pocketed another 10 grand for his separate prop bet that there would be a safety in the NFL championship game.

Here's to your luck being that good during Super Bowl LIII and beyond.