The drama continues in Washington, D.C., as far as keeping the federal government open.

It looked like, despite some grumbling from all sides, that a bipartisan, bicameral deal reached this week would keep all of the federal government open past Feb. 15. We all need to keep our fingers (and toes) crossed that it happens, especially those of us — which mean most Americans — who deal with the Internal Revenue Service.

The IRS obviously among those pushing for a resolution that will get the agency through the 2019 tax filing season. The agency is still catching up after the longest shutdown in U.S. history messed with its preparations for and implementation of the 2019 filing season.

Lingering shutdown effects: The National Taxpayer Advocate also is probably pulling for the funding deal to go through, since she noted in her 2018 annual report to Congress that the shutdown could not have come at a worse time for the IRS, which is facing its first filing season implementing a massive new tax law.

And Olson says that shouldn't happen ever again.

She's recommending in her report, released Feb. 12, that lawmakers need to make sure the IRS stays fully operational even when other agencies and offices are closed during funding disputes.

"The full effect [of the shutdown] will become clearer months, and even years, down the road," wrote Taxpayer Advocate Nina E. Olson in her preface to the report.

But, she noted, the 35-day closure exacerbated trends within the IRS and problems that taxpayers already faced.

Shutdown impact on IRS operations: Many folks, both taxpayers and tax professionals, this year have encountered some problems related to the shutdown.

Olson's report explains why and how they were created and/or worsened filing issues for the IRS and taxpayers.

On the eve of the Dec. 22, 2018, shutdown, the IRS already was looking at entering the approaching tax-filing season with a backlog of items and with its resources stretched thin, according to the report.

Specifically, says Olson, the IRS was wrestling with record inventory levels of unresolved cases in its fraud detection programs.

Plus, there was the challenge of implementing the first filing season under the new tax law, the Tax Cuts and Jobs Act (TCJA).

As part of the TCJA changes, the IRS was directed to replace the three existing individual income tax returns — the long 1040, 1040A and 1040EZ — with a single new Form 1040. While the new form is smaller (two half pages in length), its redesign necessitated the creation of an additional six schedules.

The new tax law required the IRS to deal with what Olson calls a surge of tax instructions and publications, as well as notices, FAQs and regulations. During this process, as with other massive tax-related acts, key information technology (IT) personnel were moved from ongoing modernization or enhancement efforts to work on delivery of the new tax law and forms. And that meant that electronic filing requirements were not issued to private tax software vendors and electronic return originators until September 2018, much later than in previous years.

Then the IRS actually had to close many of its doors. Those excepted tax operations that remained open during the shutdown were forced to do run through the end of 2018 and into the first part of 2019 with only a fraction of employees.

Thousands more IRS staff eventually were recalled to help kick off the Jan. 28, 2019, filing season. However, they first had to clear at least some of the backlog that had piled up since late December. 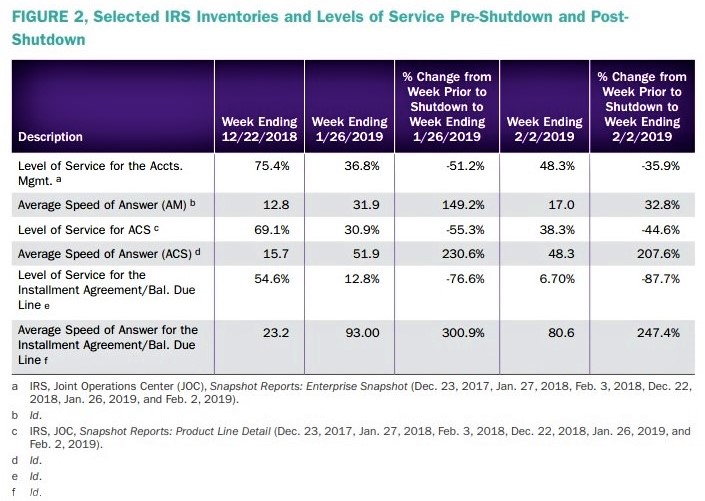 IRS problems mean taxpayer problems: The practical effects of this slowed workflow posed not only problems for IRS personnel, but obviously affected the service available to taxpayers.

In addition, during the shutdown the IRS' National Distribution Center (NDC), the facility that handles tax forms used by companies and taxpayers, watched its inventory backlog grow to about 170,000 orders.

Employees worked overtime to process about 11,000 orders a day, but the IRS announced that orders for Forms W-2 and W-3 were backlogged and would not be finished shipping out until mid-February even though, by law, employers are required to submit these information returns by Jan. 31.

At key points in the return processing pipeline, inventories were up over 100 percent over the same time in 2018. During the last week of the shutdown, the level of service via various IRS phone lines was, in Olson's words, abysmal. Even a week after the shutdown ended, most service levels had improved only slightly.

Taxpayer protections essentially abrogated: Then there the instances where tax collection went haywire under the shutdown.

"The IRS' authority to collect revenue is not unconditional. It is conditioned on statutory protections, and a lapse in appropriations does not eliminate those protections," writes Olson.

"It is unconscionable for the government to allow its employees to enforce collection of taxes without the concomitant taxpayer rights protections enacted by Congress. None of these protections is considered an excepted activity, leading to bizarre results," added Olson.

Among the collection situations worsened during the shutdown were:

"This is, of course, absurd. And harmful to the taxpayer. And to trust in the tax system and long-term voluntary compliance," says Olson in the report. "And none of this takes into account taxpayer anxiety."

It's been more than 30 years since taxpayers have had to deal with major tax law changes and their ripple effects in a filing season. That was going to be challenge enough. The shutdown made, as Olson's report shows, things worse.

But every year, there's always some fly in the tax ointment.

Tax law changes are renewed late in a year or retroactively, forcing the IRS to scramble to make form changes.

A few stray changes are made that mess up taxpayer's plans, like the Protecting Americans from Tax Hikes (PATH) Act's mandate back in 2015 that refunds related to Earned Income Tax Credit and additional child tax credit claims can't be issued until mid-February.

So to deal with even what passes as normal at tax time, Olson says all IRS activities should be excepted under the Anti-Deficiency Act. This federal law says that no U.S. government activity it allowed if there is no money appropriated to pay for it.

Exceptions are made, however, for government actions necessary "for emergencies involving the safety of human life or the protection of property."

That's a broad statement. And the way the IRS has interpreted Office of Management and Budget guidance issued in 1981 has not always been consistent, notes Olson. She points out:

For future government shutdowns, Olson wants the interpretation to be even more inclusive when it comes to the IRS.

"I will recommend that Congress at the very least exempt the IRS from the operation of the Anti-Deficiency Act," she writes.

Specifically, Olson wants lawmakers to ensure that the IRS would have sufficient personnel available in future shutdowns to protect taxpayer rights.

"The strict interpretation of the Anti-Deficiency Act limits the ability for taxpayers to receive the tax help they need, specifically when an economic hardship happens at a time while government operations pause due to a shutdown," she argues in her report.

Added Anti-Deficiency Act actions: Will Congress agree to a wider exception of activities by the IRS during government shutdowns? It's not an outrageous consideration given the agency's importance to revenue collection and the scope of U.S. citizens who interact, if only once a year, with Uncle Sam's tax collector.

And the IRS is not the only agency that some have said should continue to run on the promise that funds eventually will be available.

Earlier today the House Transportation subcommittee on aviation examined a proposal that would keep the nation's aviation system running during future government shutdowns.

The Aviation Funding Ability Act would shift the money from the $6 billion Aviation Trust Fund to keep the Federal Aviation Administration and open — and Transportation Security Administration (TSA) workers on the job — when most of the rest of the government shuts down.

Concerns about air safety largely are credited with bringing the last shutdown to a close.

If, heavens forbid, we are forced into a possible second shutdown in a couple of days, the air safety system won't be alone in facing extreme pressure again.

The complications the IRS is now dealing with (and detailed in Olson's report) after the convergence of a prolonged shutdown and filing season could have dire results. A second closure of tax offices in such short order could essentially grind the tax collection, payment and refund system to a halt at this key time of year.

And that is not a thing anyone anywhere wants to see happen.