Donating & deducting gifts to governments (but not the wall) 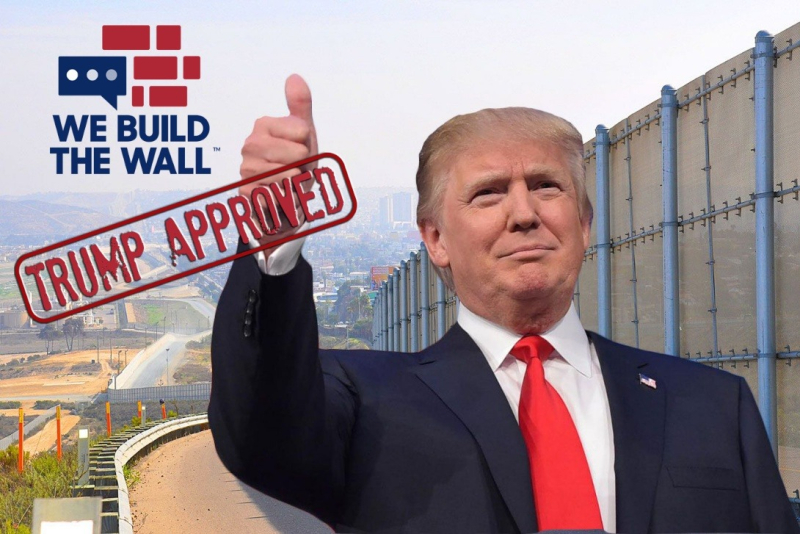 A crowdfunding effort to raise money to build a wall along the U.S.-Mexico border has ended, but some folks still want to contribute.

The debate on an expansive U.S.-Mexico wall (or similar structures) continues, in Washington, D.C., as well as across the country.

The top issue right now is money to pay for any barriers along the United States' southern border. Donald J. Trump has declared the situation a national emergency, which his administration says would free up a total of $8 billion for the campaign-promised project.

Opposition to the wall and Trump's workaround to pay for it has received most of the recent attention.

Lawsuits have been filed in several federal courts across the country to challenge the border emergency assertion on a variety of grounds.

This week the House is expected to pass a resolution to block Trump's declaration. The outlook for a subsequent Senate vote is less clear.

UPDATE, Tuesday, Feb. 26, 2019: The House this afternoon approved that resolution rebuking Trump's move. It now goes to the Senate. If approved by that chamber, Trump is expected to veto it.

But some folks support and even want to help pay for the border barrier.

Notably, there's the GoFundMe fundraising effort that raised more than $20 million. It since has morphed into the 501(c)(4) nonprofit We Build the Wall, reportedly collecting around $7 million.

Down here in Central Texas, a 7-year-old boy's hot chocolate stand went viral — helped in large part by mentions from Fox News' Sean Hannity and Donald J. Trump, Jr. — after he raised around $10,000 in less than a week to help build the proposed wall.

Limits on wall donations: Politics and wall positions aside, the efforts by private citizens to help pay for public projects raise some interesting questions.

The first and biggest question is whether such payments can be accepted.

True, the government has accepted private donations for infrastructure before.

In 2012, for example, Bethesda, Md.-billionaire philanthropist David M. Rubenstein donated $7.5 million to fix the earthquake-damaged Washington Monument. That gift came on the heels of his $4.5  million donation to the National Zoo's giant panda program and another $13.5 million gift to the National Archives.

But the Department of Homeland Security (DHS), which oversees border issues, said in 2008 policy directive that money donated to the department would require approval from Congress. The directive cites a law (6 U.S. Code § 453. Use of appropriated funds) that says "gifts or donations of services or property of or for the Department may not be accepted, used, or disposed of unless specifically permitted in advance" by Congress.

That's not going to happen as long as the House is under Democratic control.

Other gifts to Uncle Sam, however, are OK.

In fact, if you itemize your deductions instead of claiming the standard deduction, donations to the federal government can be claimed as charitable donations.

Giving more to the feds: Most folks feel like they give enough to the U.S. government with their annual tax payments.

The Bureau of the Fiscal Service, a part of the Treasury Department that basically handles financial management operations, says that citizens who wish to make a general donation to the U.S. government may send contributions to a specific account called Gifts to the United States.

This account, according to the website, "was established in 1843 to accept gifts, such as bequests, from individuals wishing to express their patriotism to the United States. Money deposited into this account is for general use by the federal government and can be available for budget needs. These contributions are considered an unconditional gift to the government."

Financial gifts for this purpose can be made by check or money order payable to the United States Treasury and mailed to: 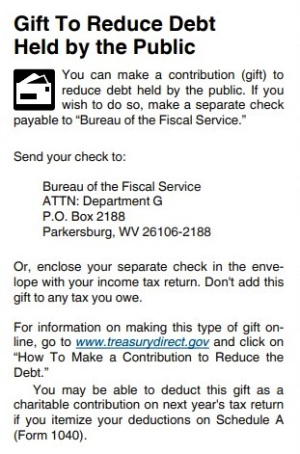 Paying down the federal debt: You also can specifically give to 33 federal efforts, ranging from certain Department of State programs to a handful of projects overseen by the National Marine Fisheries Service to 14 different veterans' health programs to helping reduce Uncle Sam's growing public debt.

The federal debt fund is one of the more popular options, even getting a special mention in the Internal Revenue Service's Publication 17, its annual tax guide for individuals.

Again, if you prefer paying the old-fashioned paper way, you can send your debt reduction check to:

If, however, you are OK with online payments, head to the Treasury Direct website for details on sending in your debt reduction dollars electronically.

E-giving to other federal programs: In fact, the easiest way to make any added gifts to Uncle Sam is by using the Treasury's pay.gov website.

When you click on the Make a Donation or Contribution link at the bottom of the page, you be taken to the first of several pages with more on the federal programs to which you can donate.

You can choose to have the money transferred from your bank account or you can donate using a credit or debit card.

If you go the plastic payment route, the site reminds us that we might have to limit our generosity:

"U.S. Treasury has established a maximum transaction amount for credit card payments made through Pay.gov of $49,999.99. If the amount you plan to pay exceeds this limit, you must choose ACH [bank transfer] as your method of payment."

Deducting government gifts: The tax code allows gifts to many entities to be deducted by the donor as long as the gifts do not benefit any specific individual. This includes gifts to governments, from the federal level to those closer to home.

Specifically, the IRS allows for deductions of contributions made to:

Determining whether the group to which you contribute is qualified under the tax code is just one step.

You also must meet the other charitable donation deduction rules, which means itemizing your expenses. You can get the details on charitable gift deductions in my post about the annual Giving Tuesday philanthropic push.

Donating sans deductions: This year, there likely will be fewer folks claiming charitable donations on their taxes. That's not necessarily because not as many folks are giving or are giving less.

It's because the Tax Cuts and Jobs Act (TCJA) which is in full force for the first time this filing season has almost doubled the standard deduction amounts.

But just because you use your gift to reduce your tax bill, your goodwill still is needed. It might not do you any good on your 1040, but you and your favorite charities still will feel great and that counts for a lot.