How to report Super Bowl & other taxable gambling wins

There was national anthem controversy at Super Bowl LIII, but it wasn't about what the players did during the song. It was about how long it took Gladys Knight to sing the Star-Spangled Banner and how it affected the associated prop bet. If you did come out on the winning side of the song, here's how to report that and other taxable gambling income. 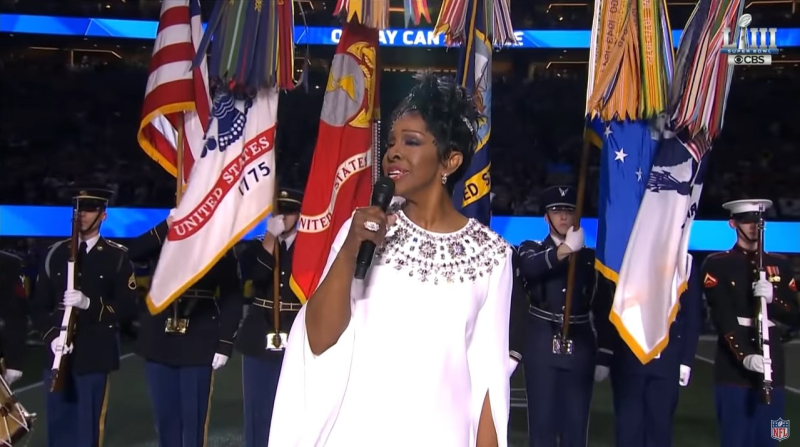 There's no disagreement that Gladys Knight's Star-Bangled Banner was magnificent. However, gamblers had some issue with how long the song lasted, which was one of the prop bets wagered on the game and its ancillary events.

Many who watched Super Bowl LIII say that the best part of the event was Gladys Knight's singing of the national anthem.

Her performance, however, also created the biggest prop bet controversy of the 2019 NFL championship game.

As is always the case, gamblers can bet on whether The Star-Spangled Banner presentation would end or go beyond a certain time frame. This year, it was 1 minute, 50 seconds.

But by the time the flyover, viewed through the briefing visible opening at Atlanta's Mercedes Benz stadium roof (another prop bet, by the way), and applause was over, a controversy was brewing in betting circles.

Gamblers on both sides of the stopwatch, many betting legally for the first time following last year's U.S. Supreme Court ruling that all states now can decide whether to allow sporting event wagering within their borders, were convinced they had won.

At issue was Knight's end-of-song that flourish threw what is usually a clear-cut result into doubt.

It seems that Knight said the word "brave" twice, which opens up the actual ending of the anthem to debate. Did it end after the first "brave" or the second one?

Some sportsbooks specified in advance that they would time the anthem only to the end of the first "brave." Here, it seems like Knight finishes saying "brave," then pauses briefly and says "the brave" in a long, drawn-out sound that appeared to take the anthem over the 1:50 minute prop bet parameter.

You can judge for yourself in the National Football League/CBS YouTube video below.

Some of the other prop bets, however, were more easily decided. And many of those paid off quite nicely.

All gambling proceeds are taxable income: That's why I'm back again this year reminding gamblers that all gambling winnings are taxable and review how to report those payoffs to the Internal Revenue Service.

If you placed your bet at a now-legal gambling establishment in Nevada or the seven states — Delaware, Mississippi, New Jersey, New Mexico, Pennsylvania, Rhode Island and West Virginia — that now also are taking above-board bets, you likely will get a Form W-2G next year detailing your win.

Remember, the IRS also will get a copy, so don't simply "forget" to report this income.

If you don't get an official earnings statement because say, you didn't win that much or you placed your bets with your neighborhood bookie, you still are legally liable for taxes on the under-the-table wagers. Yes, it's unlikely that the IRS can track down that money, but just in case.

If you're worried the IRS will report your illegal betting, don't be. That's not the prime job of Uncle Sam's tax collector. He doesn't care if you get your money via criminal enterprises, be it shady gambling or some other nefarious scheme. He just wants his due portion of the taxable income. Remember the most notorious tax scofflaw, Al Capone.

However, I know all the readers of the ol' blog are very honest taxpayers. For all y'all Super Bowl and other bet winners, here's how to let the IRS know about your taxable luck.

Look for the tax statements: As mentioned earlier, the new legal gambling spots in more parts of the country will make the IRS' job easier in tracking winnings.

If you win at a casino, race track or other legitimate gambling venue, depending on the game of chance and amount you win, you will get a Form W-2G from the betting parlor detailing your winnings.

Sometimes the amounts won trigger the new, slightly lower withholding rate of 24 percent when the lucky gambler is paid. In other instances, a gambling establishment simply will ask winners for a tax ID (the individual's Social Security number) for tax-reporting purposes.

With or without withholding, if you get a W-2G, be sure to include the amount on the form on your tax return. The IRS will get a copy of this form, too, so if you don't report it, tax agents will come asking.

Use the new Schedule 1: If you're a casual gambler (like me!), with a trip now and then to Las Vegas, Atlantic City or your nearest casino, you should report the annual total of all your gambling winnings, with and without W-2Gs, on line 21 of the new Form 1040 Schedule 1.

This amount used to go directly on the long Form 1040, but the many tax law changes in the Tax Cuts and Jobs Act (TCJA) prompted the IRS to redesign that form.

The new, and only, Form 1040 is condensed. But the IRS still is looking for the information it used to get on the old longer form. To get that, it has moved a lot of 1040 lines to a variety of schedules that will be filed along with the new shorter tax return.

For reporting 2018 tax year gambling income, you'll enter the amount of your winning wagers as additional income on line 6 of the new Form 1040, with details entered on, yes, line 21, Other income that now appears on the new Schedule 1 you'll send in as an attachment to your federal return.

The amount of prizes or awards, either the cash you received or the value of merchandise won, also goes here.

Take advantage of your losses: And yes, while the TCJA did do away with or dramatically alter many deductions that used to be claimed by itemizers on Schedule A, the option to deduct your gambling losses remains.

These losses you enter on the "Other Miscellaneous Deductions" section of the new Schedule A will help offset your taxable winnings.

Wait, you say. Didn't the new tax law, the Tax Cuts and Jobs Act that took effect on Jan. 1 and, as just noted, also led to the revising of Form 1040, do away with that itemizing option?

You're thinking of the "Job Expenses and Certain Miscellaneous Deductions" section of Schedule A. That was eliminated.

But the "Other Miscellaneous Deductions" segment survived. And just like it was under the pre-TCJA, these "other" deductions are not subject to the 2 percent of adjusted gross income threshold in order to be claimed.

Note, however, that your bad betting luck only goes so far. You can only use your gambling losses to offset, perhaps zero out, your winnings. You cannot use them to produce an income loss on your return.

And if you don't itemize, which you might not especially now that the standard deductions are so much larger under the new tax law, then you can't reduce your winnings at all. You must simply report all the money you made on winning wagers.

Gambling records are key: To make sure you get the most from those bad bets, keep good records.

You generally can prove your winnings and losses through official documentation like the previously mentioned W-2G or Form 5754, Statement by Person(s) Receiving Gambling Winnings.

Other gambling winnings and losses can be verified by wagering tickets, canceled checks, substitute checks, credit records, bank and ATM withdrawals and statements of actual winnings or payment slips provided to you by the gambling establishment.

The IRS also suggests keeping your own documentation in the form of a diary. I'm not talking about a journal where you note, "Dear Diary, the slot machines at Kay's Kasino suck, as in sucked up all my paycheck!" (although that might be cathartic if you're on a losing streak).

Rather, keep a log of your losses and winnings. You can find more record keeping details based on the type of gambling you prefer (Keno, Bingo, poker, horse racing, etc.) in IRS Publication 529.

The IRS doesn't want to see your gambling records when you file your return. The agency has enough to sort through already. But if an IRS examiner sees something suspicious, your complete gambling journal and accompany records will help you show how you cut your $10,000 in winning Super Bowl bets to zero.

Tax timing: Finally, remember that your winnings from yesterday's big game will go on your 2019 return due next year.

For this year's April 15 (or 17 for New England filers and bettors) Tax Day, you'll need to dig out last year's winning receipts — and losing tickets — to tally the correct amounts to include on your 2018 forms and schedules.

To save you from such filing scrambling in 2020 and future tax filing years, start a gambling diary and collection of supporting documents now.

Good luck, on both your taxes and future games of chance.

And oh yeah, the New England Patriots earned their sixth championship ring by beating the Los Angeles Rams 13-3 in the lowest-scoring Super Bowl ever.