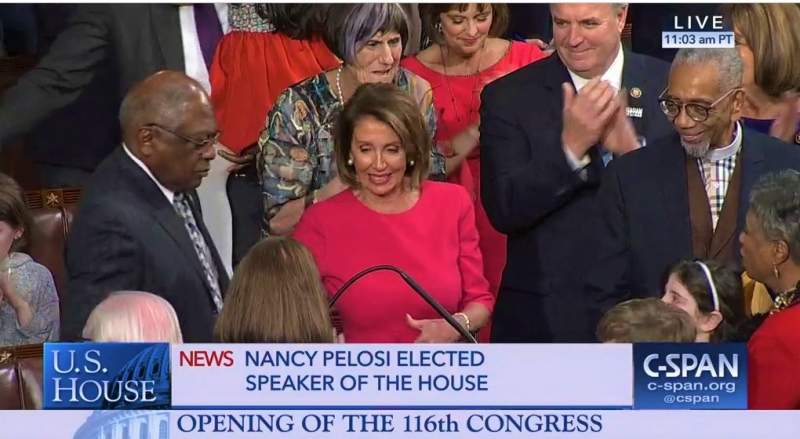 Screenshot from C-SPAN broadcast of the convening of the 116th Congress. Click image for full video.

It's official. The 116th Congress is in session, with the Democrats retaking control of the House.

Also as expected, presidential tax returns are atop the House Democrats agenda.

Yes, I'm talking about the still unseen 1040s of Donald J. Trump, both those he filed while a candidate (and before), as well as his post-election filings.

Trump was the first major-party presidential nominee since the 1970s to refuse to release his tax returns. The reason, given when Trump was a candidate and since the election, is that his returns are under audit.

Such examinations, however, don't preclude individuals from making their taxes public, according to the Internal Revenue Service.

10 years of future candidates' taxes: One of the first tax bills that House Democrats plan to drop into the hopper would affect future White House wannabes.

Presidential and vice presidential candidates would be required to make public 10 years of tax returns within 15 days of becoming their party's nominees. That's substantially more than the three years of returns discussed earlier by the party.

In addition to opening up IRS filings of candidates for the country's top office, the bill reportedly will include a variety of what Democrats are calling good-government measures.

The proposal, according to various news reports as well as a Washington Post op-ed written last November by Pelosi and Rep. John Sarbanes (D-Maryland), also would address the Voting Rights Act (key parts of which were invalidated in 2013 by a U.S. Supreme Court decision), make campaign finance reforms and strengthen government ethics laws and enforcement.

The bill reportedly will be H.R. 1. Low bill numbers typically are reserved by Party leaders for pieces of legislation they consider top priorities. The designation as the first bill of the legislative session generally goes to what the Party in control of the House designates as its signature policy issue.

Of course, even if the expected H.R. 1 does clear the Democratically controlled House, its prospects in the Senate, still under GOP leadership, are slim. OK. They're none.

A peak at Trump's taxes, too: House Democrats have a slightly better shot at finally getting a glimpse of Trump's tax returns.

Internal Revenue Code section 6103(f)(1) allows the chairs of the Congressional tax committees — that's the Ways and Means in the House and Finance in the Senate, as well as the Joint Committee on Taxation — to formally request the tax returns of individual taxpayers, including sitting presidents, and review them.

The caveat here is that only the tax-writing lawmakers, which in closed executive session, can see the returns unless the taxpayer agrees to make them public.

So we, the general public, still wouldn't see Trumps taxes. But lawmakers who have concerns over what might be in the filings would get a chance to see them.

If the Secretary of the Treasury grants the request. Will Sec. Steven Mnuchin, a Trump appointee, do that? Probably not.

That's something Democrats, led primarily by Rep. Rep. Bill Pascrell Jr. (D-N.J.), tried to do several times while in the House minority.

It's probably still a symbolic move, but at least now Democrats get to make it.

I just want to revisit the true value of tax transparency. I think "tax transparency" provides two opposing sides of the same coin: the first is transparency and the second is populist anger to wealth.

1 - Transparency
We generally believe as I do personally, that transparency helps us make better decisions. But I question this with regards to tax transparency. Would we really understand anything from Trump's hundreds of K-1's? Maybe we'd find LLC's that are Russian subsidiaries? Or maybe we would learn nothing since he likely has series LLC's and a mixed bag of capital gains/losses. Maybe we learn that Trump didn't really make any money... maybe he's not a billionaire and perhaps received the EIC the same year he was nominated as the GOP front-runner? The possibilities go on, but I truly question how much of a better decision we would make with Trump's return. Unless, of course, we found out he was in the top 10% of earners and not the top 1% - that would bother both his supporters and enemies.

2 - Populist Anger to Wealth
In the event that the return shows incredible wealth, no degree of fair reporting and honest business in Trump's tax return would quiet the populists about Trump's greed. See Romney's tax return reaction in 2012. Generally considered an honest guy, he got lambasted for mostly paying the capital gains rate on income and therefore not paying his fair share. Any way you cut it, those of means publishing their tax returns will lose points simply for having more.

On the whole, I just question the value of seeing Trump's tax returns and I'm in no way a Trump supporter. Have we not seen enough to decide for ourselves whether Trump is president-worthy or not? Can we not rate the sitting president on the basis of his deeds instead of his business dealings?

I feel like the new birthers are the tax-transparency-ers. But let me know if you disagree.