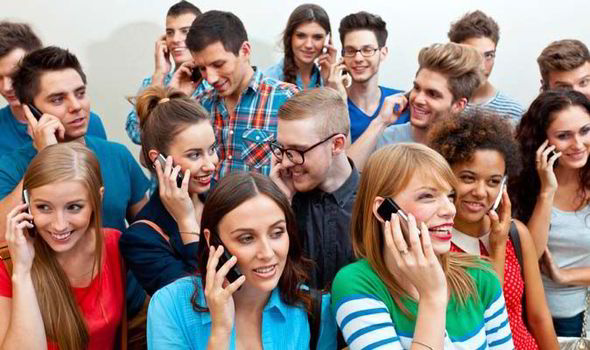 Electronic gadgets are on a lot of Dear Santa lists. If you're planning to play the Jolly Old Elf and get a family member or friend a phone, tablet, speaker or TV that depends mobile reception, also might want to slip a few extra bucks into the gift recipient's stocking.

They'll need it to cover the taxes, fees and governmental surcharges on wireless services that have increased dramatically.

Wireless service costs drop, but taxes increase: A typical American household with four wireless phones paying $100 per month for taxable wireless service can expect to pay about $229 per year in these added charges in 2018, according to new research from the Tax Foundation.

The Washington, D.C.-based tax policy nonprofit's data show that added the higher wireless taxes et al now account for more than 19 percent of those consumers' wireless bills. That's the highest rate ever and it almost wipes out the corresponding 23 percent decrease over the last decade to the average monthly per subscriber wireless service bills.

Breaking out all those charges on you bill, the Tax Foundation found that:

Overall, the Tax Foundation says wireless consumers will pay an estimated $16.1 billion this year in these added charges. The break out of these taxes, fees and surcharges is:

Higher wireless tax rates: Adding insult to injury, the study found that most states impose higher taxes, fees and surcharges on wireless service than on other taxable goods and services. 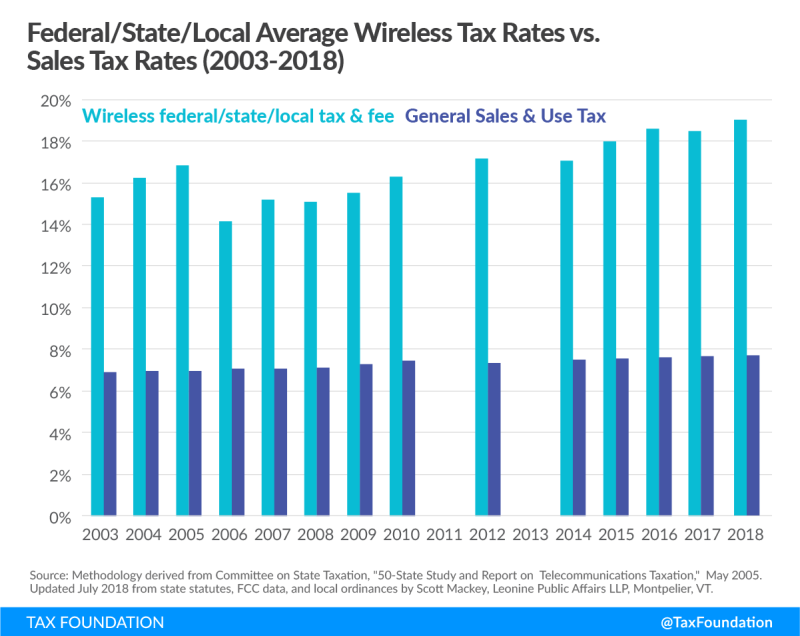 Wireless and other telecommunications are one of the few services that are consistently subject to sales and use taxes by states with both narrow and broad sales tax bases, note report authors Scott Mackey and Joseph Bishop-Henchman.

Furthermore, states like Delaware, Montana, and New Hampshire that do not impose a sales tax have specific taxes on wireless and other communications services, according to the report.

State tax details: So which wireless customers are hit the hardest? The data shows that consumers in Illinois, Alaska, Washington and Nebraska pay the highest wireless taxes in the country.

At the other end of the wireless bill scale are customers in Oregon, Idaho and Nevada, who pay the lowest wireless taxes.

The Tax Foundation's study has full state-by-state (and District of Columbia and Puerto Rico) details, but below is the organization's map for a quick look at how your state wireless taxes and other surcharges compare. 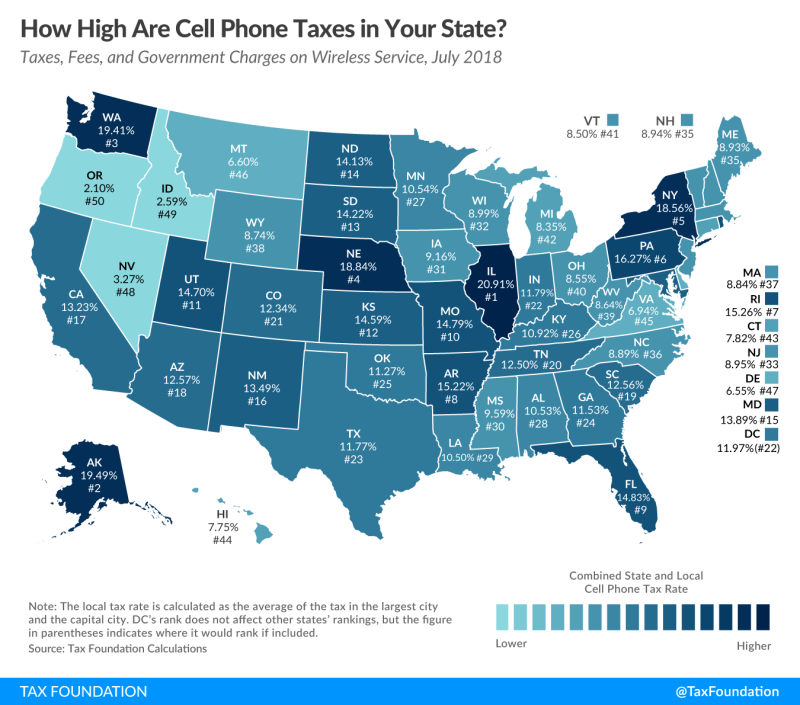 Hooked on Wi-Fi: Will these charges make people rethink their connectivity choices?

Wireless phone communication is ubiquitous. At the end of 2017, 53 percent of all adults were wireless only.

A key reason is that an on-the-go phone is so easy. Plus, you get so much more than just the ability to talk to others.

Texting is supplanting talking over mobile devices, particularly among the younger generations of users.

Taxing jurisdictions know this. That's why they'll likely continue to take advantage of our addition to our phones and other mobile devices and keep adding and/or bumping up the added charges to use them.

And we'll keep adding to our personal wireless equipment collections.