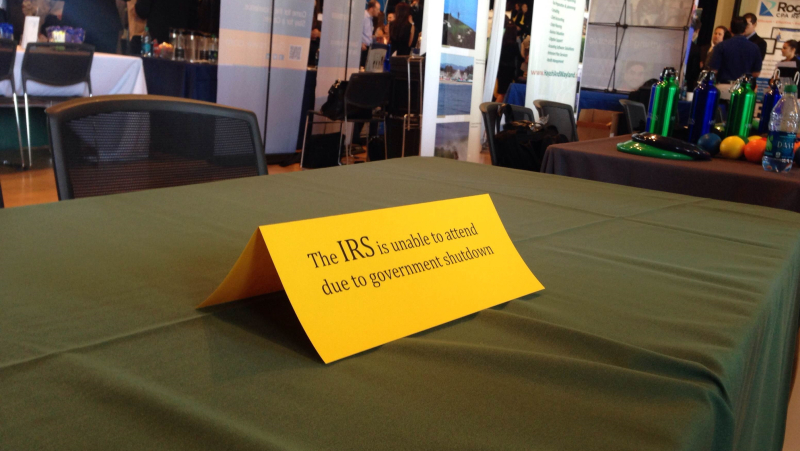 We're now into the third shutdown of federal offices this year. The other two were brief closures back in January and February.

Will this latest federal government shutdown, which began at midnight today (Saturday, Dec. 22) be similarly short-lived? Maybe, but closure #3 of 2018 already is the longest of the year, with the January shutdown lasting three days and the one in early February technically shutting federal doors for just a few hours.

Nothing is expected to happen until after Christmas. Some are predicting the impasse will continue into the new year.

And Donald J. Trump has vowed that the nine federal departments and multiple agencies that are now without funding could find themselves sidelined for a "very long" time.

Duration discussions aside, we do know that unless there's a breakthrough by Congress and the White House this weekend, more than 420,000 federal employees will go to work next week knowing that they're doing their jobs without any pay.

And all of these 800,000 or so federal workers will be worrying how they're going to pay for their holiday gifts, either this coming Christmas week or, more likely, next month when the bills for the credit cards they used to purchase them arrive.

IRS alerts employees: The reality of that situation became clear when the Internal Revenue Service posted the following message on its website:

This message applies to all IRS employees.

Due to the lapse in appropriations, most IRS operations are closed. An IRS-wide furlough began on December 22, 2018, for everyone except already-identified excepted employees. Non-excepted employees are furloughed and placed in a non-pay and non-duty status until further notice; however, all employees should plan to report to work for their next tour of duty. Employees will be given up to four hours to close out work requirements and receive formal furlough notification. Employees may report via remote access if they have telework capabilities.

As a reminder, the Employee Assistance Program is available for all IRS employees and their immediate family members at any time, day or night, by calling 800-977-7631 (TDD: 800-697-0353). This no-cost counseling service could help address stress and other issues you and your family may face.

Other Treasury Department employees have received a similar announcement. So have workers in the similarly unfunded Departments of Agriculture, Commerce, Justice, Homeland Security, Interior, State, Transportation and Housing and Urban Development, as well as those in several smaller agencies.

Job parameters under shutdown: The unpaid workers who will report to their IRS offices — or as the message notes, can do their unpaid jobs remotely — will be operating under the guidance of the agency's closure contingency plan.

As noted in my prior posts as the shutdown loomed, it's possible that if the closure of IRS and the other affected federal agencies drags on, the 2019 tax filing season could be delayed. And that means millions of taxpayers will be waiting longer for their expected tax refunds.

It also means that the IRS won't have enough staff on hand to examine returns, meaning folks who fudge their filings could get away with their tax evasion efforts.

What the IRS will do during shutdown: In government shutdown situations, the IRS focuses on what are termed excepted actions.

These are, in the IRS' case per the contingency plan, actions that are "Necessary for the Safety of Human Life or Protection of Government Property The Budget Enforcement Act of 1990 amended the Anti-Deficiency Act."

We can spend days and innumerable blog posts parsing this phrasing, but basically these are IRS activities that help the agency collect money, as best it can in shutdown situations, to keep the rest of the federal government going.

The excepted jobs that more directly apply to taxpayers and which will be done during shutdown include:

What the IRS won't do during shutdown: On the other side of the shutdown coin are the non-excepted actions, or those "regular, ongoing functions whose suspension would not pose an imminent threat to life and property."

Again, these are things that the IRS has determined aren't key to the agency's job of collecting taxes. So the non-exempt list of jobs the agency won't focus on when the government is closed includes:

Plan timing, possible amendments: This contingency plan likely will be updated if the shutdown goes into 2019.

The plan itself says as much:

If the IRS is operating under furlough guidelines in 2019, expect some changes as to the excepted and non-excepted activities that workers, still unpaid, would perform during filing season.

Note, too, that while a government shutdown will hamper how the IRS does its job, that doesn't mean we taxpayers are off the hook.

Whenever the IRS does start accepting tax returns in 2019, all of us will be expected to file as usual and meet the April deadline.

Though shutdown has been called off recently I fear that there might be another shutdown. US Citizens has been suffering the most, mainly the lower and lower middle class. Government employers weren't being paid. This is completely ridiculous!

I ordered tax forms from IRS.gov website back at the first of January (1099,1096, W-2, & W-3 forms). They have not come in the mail. Should I expect them to? If not, I need a recommendation as how to get these forms to send to those I need to. I only need a few of each (less than 5 of each)

Thank you for serving our country in your capacity even with the uncertainty of the times.

How can i stop my wage garnishment that started one week prior to shutdown???????

I received an intent to levy letter last week, with 30 days to take action but my account has been in dispute since 9/2018, how do I contact anyone to resolve this?

Notices of intent to seize (levy), how do you go about that when the IRS is shutdown. I can’t even set up a payment plan they have no one to answer the phones. And I have until February 7th, 2019 to pay my balance. This is nerve wrecking. What is recommended?

On Dec 18th I was called by ITIN to return to duty on Jan 2. I'm going to show up (it's a 10 min drive). Any ideas on what might happen? If ITIN reopens two weeks later, do you think I'll be paid for those weeks? - crazier things have/will happen(ed).

All federal workers doing their job without pay during this sophomoric stop are saluted. Thank you!

Yes, essential federal workers will be paid … eventually. But if you're running short on funds, say because you spent extra money on holiday gifts, then an eventual check when your have a here-and-now bill due for something like utilities is not much good. Hence, the last paragraph of the IRS message references employee assistance. These shutdowns are absurd and hurtful to folks just trying to make a living. We all are at the whims of our employers, but this is a situation that happens all too often and for stupid reasons, mainly grandstanding by politicians who don't miss paychecks and are well off enough to not have to worry if they did.

Your broad statement "... we do know that unless there's a breakthrough by Congress and the White House this weekend, more than 420,000 federal employees will go to work next week knowing that they're doing their jobs without any pay. " What really happens per the Washington Post "Employees deemed essential, otherwise known as 'excepted workers,' who must work during the shutdown, WILL get paid for that time after the shutdown, according to guidance released by the Office of Personnel Management. For furloughed employees, however, it’s up to Congress whether they get paid for the shutdown period; after EVERY previous shutdown, Congress has passed legislation mandating that furloughed workers be paid." (emphasis added)