Tax refund delivery isn't the only tax function that likely would be delayed if the federal government is shut down for an appreciable length of time.

Tax audits, or examinations at the Internal Revenue Service calls them, also will be sidelined if fewer agency employees are at work.

A lot of folks say that's not a problem. I get it. Nobody likes tax audits, even — maybe especially — when you haven't intentionally done anything wrong with your tax filing.

But audits are a key component of taxpayer compliance.

Why audits are important: The rationale for auditing returns comes from something most of us learned as children from our parents. You do something wrong, particularly something you know is wrong but insist on doing anyway, and you will be punished.

The IRS knows that childhood lesson, too.

And tax law abiding folks should be thankful for audits. Wait! Hear me out.

When tax cheats get away with shorting the U.S. Treasury, that hurts all of us.

Those of us faithfully and fully paying, albeit grudgingly, our taxes every year are the ones carrying the burden caused by the dollars lost from tax scofflaws unpaid IRS bills.

Realistically, we can't make up all that missing tax money (aka the Tax Gap), so we also suffer the loss of services that come when Uncle Sam doesn't have money to pay for them.

Audits already falling: Audits, however, are not a key function in the Treasury Departments government shutdown contingency plan. On the non-excepted list of actions — those are jobs that are not deemed critical to the functioning of the IRS — are "all audit functions, examination of returns, and processing of non-electronic tax returns that do not include remittances."

And even without a shutdown, the IRS search for that missing money is slowing.

The IRS latest Data Book, the annual review of how it did its job the previous fiscal year, reveals that several of the agency's collection actions fell during fiscal 2017. IRS levies were down 32 percent compared to the prior year. The tax agency also filed about 5 percent fewer liens than in fiscal year 2016.

As for audits to find the tax cash, in fiscal 2017 the IRS audited almost 1.1 million tax returns. That breaks out to just 0.6 percent of all individual income tax returns filed that year and only 1 percent of corporate (excluding S corps) returns. 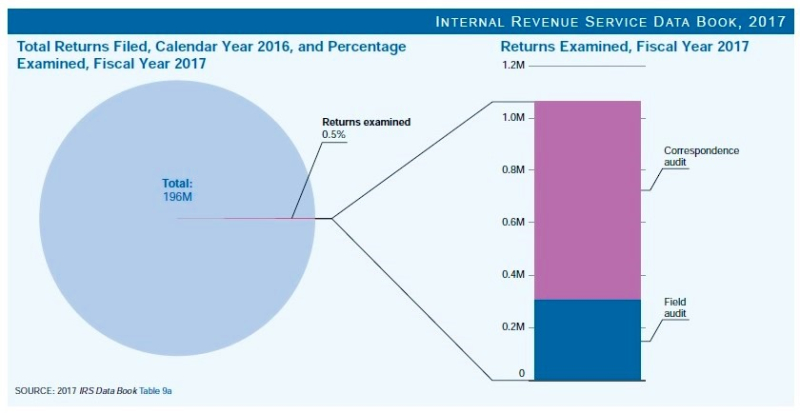 In real people numbers, that means the IRS in fiscal 2017 audited about 1 in 160 individual tax returns. That's the lowest examination rate since 2002.

It also was the sixth consecutive year that audits have declined.

Other audit tidbits from the 2017 Data Book include:

But audits aren't always bad. The IRS also notes that of the almost 1.1 million tax return examinations in fiscal 2017, almost 34,000 resulted in additional refunds totaling more than $6 billion to the taxpayers whose returns were audited.

OK, 34,000 is a minuscule portion of the total audited returns, but it turned out well for those filers.

Auditing the rich: While all tax cheats obviously benefit from this reduced audit shift, it's higher income earners who make out like, well, tax bandits.

Although the IRS still audits higher income taxpayers at a higher rate that the average filer — it is after all a more reliable way to get the most possible tax money — those high-earner audits have dropped.

In 2015, the IRS audited almost 10 percent of tax returns reported $1 million or more in income.

As Donald J. Trump notes when he talks about his still-secret tax returns, the 1040s filed by high earners are quite complicated. It not only takes longer to examine these more elaborate filings, the IRS agents tasked with the job need to be trained on the tax intricacies of wealthy filers.

But all that is pushed aside when the IRS has to go into shutdown mode.

And that means that while some tax cheats might win, all of us ultimately lose.