There's one more day in 2018, but it's too late to adjust your withholding for this almost over tax year.

Following enactment of the Tax Cuts and Jobs Act (TCJA), a lot of folks earlier this year should have tweaked the amount of federal taxes they have taken out of their paychecks. Those TCJA changes, which went into full effect for 2018, could mean some — OK, a lot; one estimate says 30 million — taxpayers could face an unexpected tax bill when they file their returns in 2019.

If you discover in a few months that you're one of those who owes, sorry. The Internal Revenue Service tried to warn us, starting its paycheck check-up campaign back in March.

While there's nothing to be done at this point to ease potential 2018 tax bill pain, you can start the new year off on better tax footing by adjusting your withholding for 2019 as soon as you get back to work.

All you have to do is give your payroll administrator a new Form W-4, Employee's Withholding Allowance Certificate.

And the IRS has, in fact, a literally new W-4 form for you to use.

The revised document also is this week's By the Numbers honoree.

W-4 revision, take 1: The form is similar to the 2018 version, which folks have been using since the TCJA changes and after the IRS backed off its initial revision of the payroll withholding document.

That first W-4 update back in June attempts to address reflect the changes under the new tax law.

Tax professionals, however, found the revised form caused as many, if not more, problems than it solved. The major tax and accounting professional organizations — The National Association of Enrolled Agents (NAEA), the American Institute of CPAs (AICPA) and the National Association of Tax Professionals (NATP) — were among those that didn't pull their punches on what they saw as problems with the W-4's first revision.

Among the concerns were increased burdens on both taxpayers and employers, privacy protection issues and the potential for under-withholding, which would mean filers would end up with surprise tax bills when they filed.

The IRS listened and pulled that form.

W-4 revision, take 2: Now, however, the tax agency thinks it's got things handled. 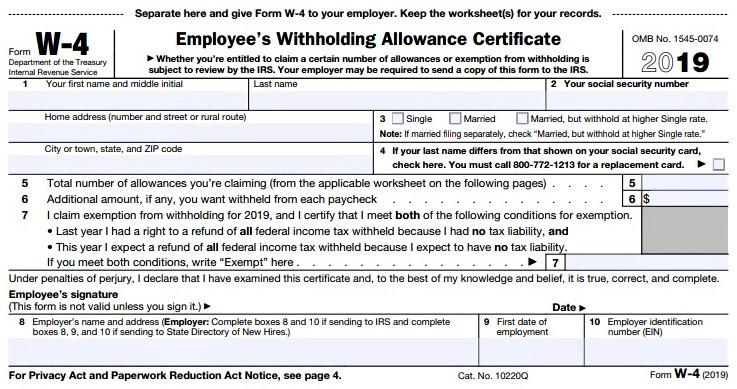 The new 2019 version of Form W-4 will, according to IRS Notice 2018-92, be similar to the prior tax year version. But, notes the IRS, the form now, among other things:

About those withholding allowances, the TCJA eliminated allowances and exemptions. However, tax provisions that weren't changed by the TCJA still refer to them.

So in calculating those tax breaks, the IRS will allow the allowance/exemption amount to be considered (or deemed) based on prior tax law and adjusted for inflation. The amount of one annual withholding allowance is $4,200 for 2019.

The IRS also says it will keep in place through April 30, 2019, its previously announced temporary suspension of the requirement that individuals furnish new W-4s within 10 days of changes resulting solely from the new tax law.

Special instructions and worksheet, too: The 2019 W-4 isn't the only withholding document released by the IRS.

It comes with instructions for folks who have more elaborate withholding situations, such as working more than one job, doing some gig work on the side, having a working spouse, filing as head of household or claiming the new tax credit for nonchild dependents.

The new W-4 worksheet can help you determine how to complete your new withholding form for the 2019 tax year.

Or as IRS employee Christine points out in the agency's withholding video below, you can use the IRS' online withholding calculator.

The IRS has another video on how to use the withholding calculator. You also can find more on how to have the proper amount taken out of your paychecks in IRS Publication 505.

Whatever method you use to determine your correct payroll withholding for 2019, do so early in the year so that the effects will be spread over the whole year. That way if your withholding needs to be bumped up a bit, it should be less of a shock each pay period.