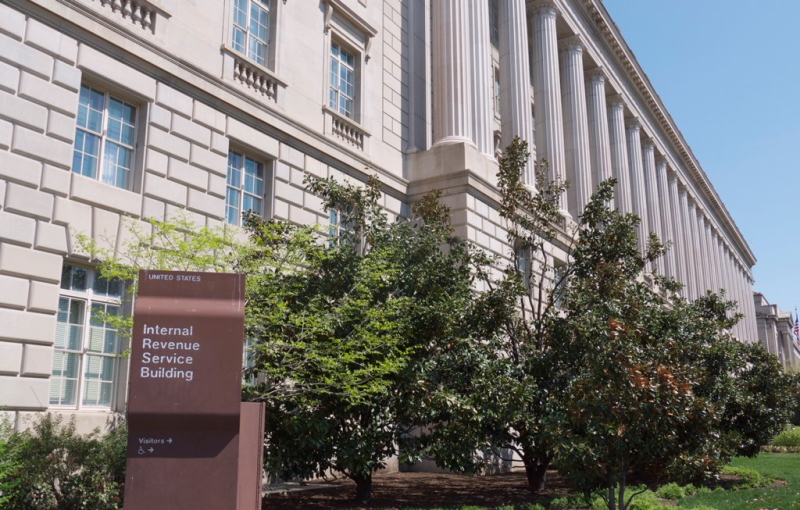 Will the Internal Revenue Service have to operate short-handed during the coming tax-filing season? Maybe. It's looking more like a government shutdown will happen after the White House rejection of the Senate-approved continuing resolution to keep all of Uncle Same's offices operating. (IRS Washington, D.C., headquarters photo by David Boeke via Flickr CC)

The Internal Revenue Service is among the federal agencies awaiting full fiscal year (FY) funding. When I woke up this morning, it looked like Uncle Sam's tax collector would get his money.

A short-term funding deal was on its way to passage, having cleared the Senate last night. House members appeared just as eager to vote and head home for the holidays.

Then came the tweets.

Donald J. Trump posted a series of comments that left most of us confused as to whether he'd sign the bill, which doesn't have his U.S.-Mexico border wall money, or veto it as part of his previously declared "proud" embrace of a government shutdown to make his immigration point.

That was followed by a White House meeting between Trump and House leadership. At the end of that get-together, House Speaker Paul Ryan (R-Wisc.) announced that Trump said he would not sign the no-wall-dollars Senate bill.

Get ready, folks, for another government shutdown.

IRS shutdown plan in place: The IRS already has issued a closure contingency plan that would be effective through the end of the year.

If the closure continues into 2019, things could get dicier, for taxpayers as well as IRS employees.

Most IRS employees, of course, would be without pay during the heart of the holiday season and possibly into 2019, when the credit card bills for gifts bought this month arrive.

As for us taxpayers, our tax refunds could be delayed if things don't get resolved quickly.

Let's hope that's not the case.

IRS funding at stake: Meanwhile, as we wait for the shuttering, at least partially as is the case with the IRS, of many of Uncle Sam's offices at midnight tomorrow (Friday, Dec. 21), let's take a look at how our country's tax collection and enforcement agency has fared financially over the years.

It's not a pretty picture.

The tax agency has seen its operating budget drop in the last eight fiscal years by $2.5 billion (18 percent) in inflation-adjusted terms. During that it's also lost roughly 14,000 employees, or more than a quarter of its enforcement staff. 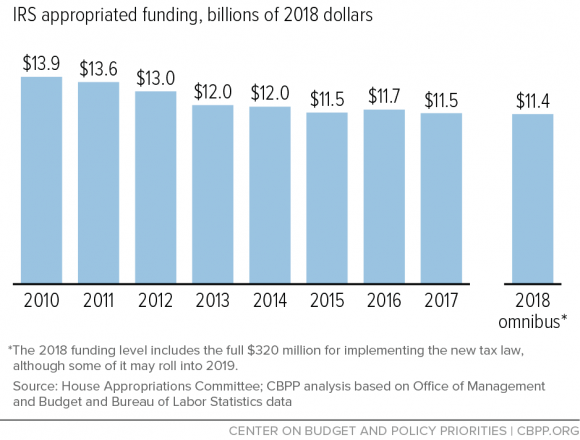 IRS' own operational analysis: The IRS own examination of its operations paints a similar cash-strapped picture.

In this latest review, the IRS looks at how during those fiscal 12 months it handled, among other things, tax returns filed and taxes collected, enforcement, taxpayer assistance and the IRS budget and workforce.

Section 8 of the 2017 Data Book underscores what CBPP and every recent IRS commissioner has said: the agency is losing personnel and needs more money.

Still, the IRS has operated for years on a budget that's hampered its ability to do its job. The agency has done its best to work around that. The preface to the 2017 Data Book notes:

"With 245 million tax returns processed in FY 2017 and more than $3.4 trillion in federal taxes paid by individuals and businesses, tax administration remains a huge undertaking. In FY 2017, the cost of collecting $100 was 34 cents, the lowest cost in more than 70 years. In all, the IRS issued over 121 million individual tax refunds totaling over $436 billion. We also continued a years-long effort to fight tax-related identity theft on many fronts, with another 524 criminal investigations completed."

The agency notes that in doing these jobs in fiscal 2017, its actual expenditures were $11.5 billion for overall operations. That was down from more than $11.7 billion in FY 2016. 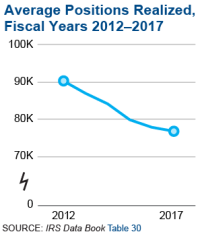 Other Data Book highlights: Also last fiscal year, the IRS used 76,832 full-time equivalent positions in conducting its work, a decrease of 14.9 percent from 2012.

Taxpayer Services funding, which includes processing for tax returns and related documents, and assistance to taxpayers filing returns and paying taxes due, accounted for $2.4 billion.

Enforcement funding, which includes the examination of tax returns, collection of balances due, and administrative and judicial settlement of taxpayer appeals of examination findings, represented almost $4.7 billion

And in a non-monetary note, the IRS notes that it is more gender diverse that most of its federal counterparts.

The agency points out that in FY 2017, women represented 65.5 percent of IRS and chief counsel personnel, compared to 48.1 percent of the overall civilian labor force.

Some might argue that given pay inequity for women, the larger than average female workforce probably contributed greatly to the IRS' ability to get so much done with less money.

This means fewer audits. Fewer visits from Revenue Officers. The IRS will have to rely on the Automated Collection System (ACS) for the bulk of their collections.