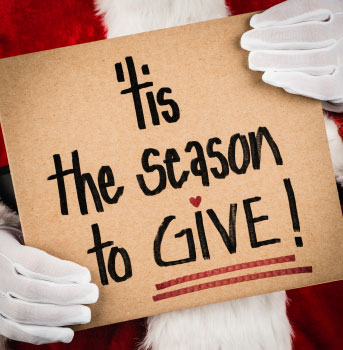 Yes, I know I've been a bit fixated the last few days on charitable giving. But it is Christmas week, the traditional time of giving gifts, which also coincides with nonprofits' annual year-end quest for more money.

Those solicitations are more intense this year as charities are dealing with the potentially costly effects of the Tax Cuts and Jobs Act (TCJA), which some analysts worry could cost them billions in donations.

And since donations to Internal Revenue Service-qualified charities can be claimed only if you itemize on Schedule A, charities fear fewer folks will give.

"In the past, about a third of Americans itemized their deductions, which meant that a third could take advantage of the charitable deduction," Una Osili, associate dean at Indiana University's Lilly Family School of Philanthropy, said on a recent Here & Now radio broadcast. "Today, probably less than 10 percent of Americans will itemize. That's a pretty big drop off."

Wealthy giving growing: The one saving grace for charities is that wealthy Americans are likely to continue to give … and claim tax deductions for their donations.

In the last decade, charitable deductions by lower-income donors have declined significantly, while charitable giving from higher income donors and the associated tax breaks have increased.

A recent study of tax filings by the Institute for Policy Studies (IPS), a Washington, D.C.-based progressive think tank found that in the early 2000s, households earning $200,000 or more made up only 30 percent of all charitable deductions. By 2017, this income group accounted for 52 percent of tax deductions.

The increase is even more dramatic for richer filers. The percent of charitable deductions from households making more than $1 million grew from 12 percent in 1995 to 30 percent, according to the IPS analysis.

New tax breaks for wealthy donors: Those well-to-do taxpayers also get better tax breaks thanks to a couple of TCJA changes.

Basically, wealthier individuals who make large donations now have a chance to offset more of their income.

Part of this added donation advantage comes from the elimination of the Pease provision (named for the late Democratic Rep. Don Pease of Ohio), which reduced the value of deductions when taxpayers reached certain income levels. Under that law, which is out of the tax code at least through 2025, filers had to reduce their overall itemized deductions by 3 percent for every dollar they made over a set income limit (adjusted annually for inflation) for their filing status.

In addition to doing away with this deduction limit, the TCJA also increased the proportion of a filer's adjusted gross income that can be offset by cash donations from 50 percent to 60 percent.

Ranking states' donations: Given the tax breaks, law changes and analysis of prior donation patterns, you'd think that states with lots of really rich folks would lead in the giving and deducting departments.

Not necessarily, at least not when you look at the averages based on prior tax years' patterns.

The Tax Foundation, another D.C.-based think tank, this one more conservative and focusing on tax efficiency issues, examined IRS data to gauge how much Americans previously have deducted for charitable giving.

It found that in tax year 2016, just more than 37 million taxpayers claimed an itemized deduction for charitable giving, deducting a total of $236 billion in donations. That produces an average deduction of $6,349.

Tax Foundation analysis note that the average doesn't represent the total amount of giving in the United States, just the amount that eligible taxpayers deducted on their income tax returns. And the D.C. nonprofit also points out what we discussed earlier, that wealthier Americans disproportionately benefit from the charitable deduction overall since they tend to itemize.

That said, four states had average charitable deductions greater than $10,000 in 2016:

The state with the smallest average charitable deduction was Rhode Island at $3,354.

The Tax Foundation map below provides a visual overview of the average deduction for charitable donations in all 50 states. 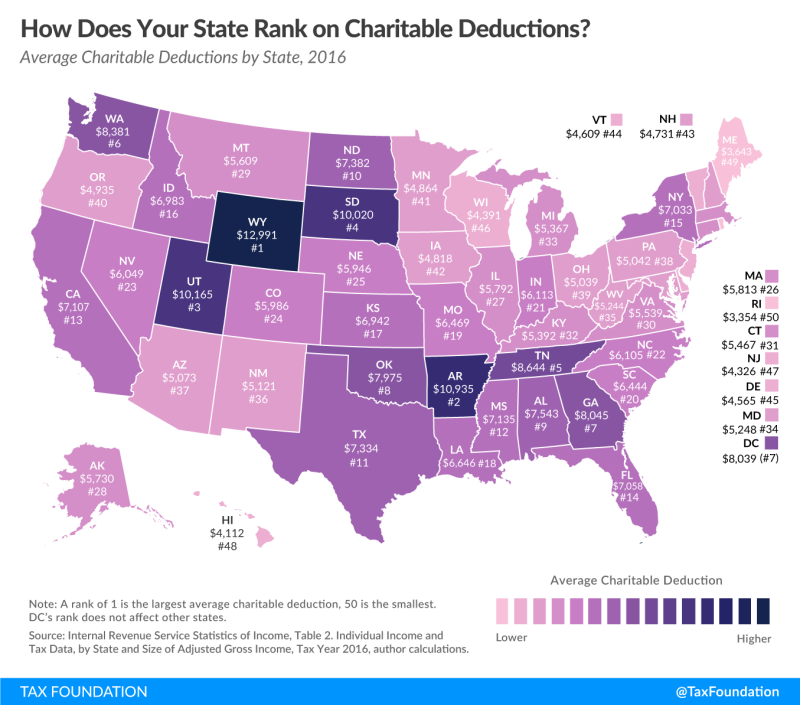 Future adjustments to averages: How will this map change under the new tax law?

"As millions fewer households will itemize going forward, we should expect forthcoming IRS data to show fewer charitable contribution deductions. What this means for charitable giving overall, however, is less certain," writes Tax Foundation analyst Erica York in her summary of the donation deduction study, which also has a table with more per-state data.

Some households may decrease their giving, says York, but others may use new strategies, such as bunching their donations, or maintaining their giving by making multiple years’ worth of donations at once to have enough to itemize.

And while a drop in tax-motivated charitable giving wouldn't be a surprise, York also points out what I and lots of other folks who follow philanthropy are always quick to note: People make donation decisions for a variety of reasons, many of which are not tax related.

If you can get a tax break for your generosity, great. Take it.

But you're great — actually, greater — when you give just because you can and want to, and not to get anything in return.