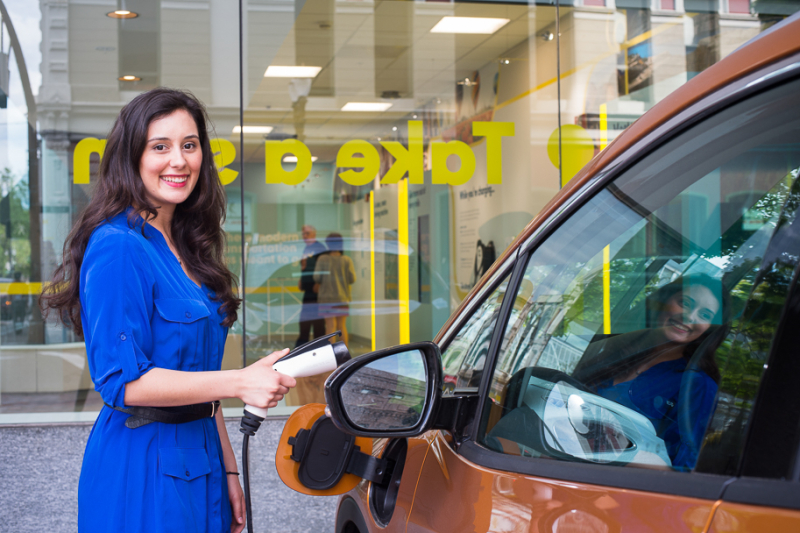 No messy splash back in fueling a Chevrolet Bolt electric vehicle outside a Go Forth showroom in Portland, Oregon.

It's that not very jolly time of year in Washington, D.C.

Representatives and Senators are back in town for a few weeks to wrap up necessary legislation before heading home for the holidays. Political fights ensue. The session drags on until it's nearly Christmas. Or after.

Members of Congress and staff stuck at work instead of making merry with family and friends and not happy. Neither are taxpayers who are wondering what literal year-end changes to tax laws lawmakers will make, effectively disrupting the careful tax plans they already had in place for the year.

And this year there's a new twist to the so-called tax extenders.

The electric vehicle tax credit up for renewal now come complete with a fight between Donald J. Trump and General Motors.

Perpetual tax renewals: Extenders are temporary tax provisions that Congress must renew periodically. For all practical purposes, they've tended over the years to be permanent tax laws because Congress typically has renewed most of them for a year or two.

Sometimes the renewals have even been retroactive, causing lots of tax compliance problems and negating some of the tax breaks when taxpayers, both business and individual, can't effectively plan for them

Back in 2015, the extenders list was trimmed when the PATH (Protecting Americans from Tax Hikes) Act made many of them permanent.

But a handful of temporary tax breaks were left in regular renewal limbo, along with the folks who rely on them.

Few extended earlier: A few of the post-PATH remaining extenders were, well, extended, this past February, but just for the 2017 tax year. (See what I mean about compliance issues?)

They included tax breaks for folks who paid college tuition and fees, had a mortgage payment that included private mortgage insurance (PMI), made certain energy efficient improvement to their homes and/or reworked their home loan and in that process had some of the debt forgiven.

But, as noted, these late-approved extenders didn't apply to the 2018 tax year.

So for the last 10 months, affected filers have been waiting to see if these, along with the many others that have officially expired, will be back in some form.

Pros and cons: Many in the tax policy world say extenders need to die. They argue that they are bad tax policy, primarily because of their transient nature and because they aren't paid for by offsets in other areas.

Plus, they contend, it's an unfair way of cherry picking tax winners (and losers).

Others, however, and admittedly mainly the folks who enjoy their benefits, argue for extenders.

They see them as an easy way to package myriad tax provisions and keep them in place in lieu of fighting the larger, more tedious legislative battle to make them permanent.

The House Rules Committee is scheduled to meet today on how to handle the Brady measure. Word is that this latest extenders package could go to the House floor for a vote later this week.

Tax incentives up for renewal include around two dozen that would benefit renewable energy. Other lawmakers in both chambers already are maneuvering to include revisions to the electric vehicle (EV) tax credit in any final extenders package.

Currently, the EV tax credit provides for a maximum $7,500 tax credit for the purchase of eligible vehicles until the manufacturer sells 200,000 qualifying autos. Then the credit starts phasing down and out until it disappears altogether. The credit amount also is determined by the electric car's battery capacity, which means the most some buyers might be able to claim is several thousand less than the $7,500 tax break.

You can get a look at the eligible EVs and credit amounts by manufacturer at the Internal Revenue Service's  special page on the tax credit.

The U.S. Department of Energy also has a nice breakdown of the EV tax credits.

And the alternative energy advocacy group Plug In America has an interactive U.S. map that shows plug-in car incentives in each state.

Adding more EV changes to extenders: Some members of Congress want to extend the EV tax credit and see the extenders package as the perfect legislative vehicle.

The Electric Cars Act of 2018 is among such potential extenders add-ons. It would extend the EV tax credit, first enacted in 2009 as a way to help popularize the then-novel plug-in autos, through December 2028. Sponsors of the House and Senate versions of this bill are all Democrats.

However, Republican Sen. Dean Heller of Nevada also has been lobbying for EV legislation, specifically an increase in the current cap on vehicles eligible for tax credits.

Heller has had a vested interest in promoting EVs. The Silver State is home to a Tesla Gigafactory, where the batteries and drive units for Elon Musk's luxury EV's are made. Tesla also is the first manufacturer to hit the 200K sales level that triggers the tax credit's reduction.

Heller, however, is not coming back to Capitol Hill. He lost his re-election bid back in November.

But not to worry EV and especially Tesla fans. Heller's successor, Democrat Rep. Jacky Rosen, will take up the cause. As a Representative, she was a cosponsor of the House version of the Electric Cars Act.

Energy times are changing: Still, it will take more than a handful of Representatives and Senators with vested constituent interest in electric autos to continue the credit.

In the past, the EV tax credit received bipartisan support. Lawmakers saw it as way to establish energy independence and reduce reliance on fossil fuels which, at the time of the initial EV bill in 2007, were coming primarily from foreign sources.

Now, however, times have changed. Sen. Charles Grassley (R-Iowa), who is expected to chair the Senate Finance Committee in the next Congressional session, recently noted that he and his colleagues in the House are "getting very timid on tax credits for alternative energy because of the abundance of petroleum and cheapness of natural gas."

They're also feeling pressure from the oil industry.

"We encourage the House and Senate to build on tax reform and not take a step backward by expanding the EV tax credit this Congress. Even if the new policy has a phaseout year, once it is included as part of tax extenders, it is very likely to be renewed year-by-year."

Trump takes a stand: And now we have an added political complication for EV tax breaks.

In the wake of GM's announcement that it plans to close five North American factories and lay off around 14,000 workers, both those on the manufacturing lines and in white-collar jobs, Trump has threatened to retaliate.

"We are now looking at cutting all @GM subsidies...including for electric cars," Trump said in Tweets expressing his disappointment with the automaker and its CEO Mary Barra.

Trump's anger is understandable. He made revival of manufacturing jobs a key plank of his presidential campaign.

But his threat to revoke EV tax credits is, given the current situation, mainly bluster.

First, despite the power of the Oval Office, a president cannot unilaterally alter laws duly passed by Congress.

Second, any effort to target a company for following its internal business plan would be challenged, probably successfully, as an arbitrary and capricious action.

Third, and most realistically important, is that Trump's threat loses power every day that a GM dealer sells an electric auto. GM, thanks to the popularity of two of its tax credit eligible Chevrolet models, is about to join Tesla in hitting the EV tax credit reduction cap.

Edmunds reports that through October, GM had sold an estimated 196,850 qualifying vehicles, which included the fully electric Chevrolet Bolt and gas-electric Volt. The company is expected to hit the cap before the end of the year.

EV, extenders outlook: So what does all this mean for the EV tax credit?

Even if the tax extenders do make it through Congress, it's a toss-up as to whether this alternative auto tax break will be a part of it.

"It is a pretty good bet that the [EV] tax credit gets extended to cover 2018 retroactively and perhaps 2019 as well," Capital Alpha Partners said in a newsletter. But longer term, the prospects aren't so good.

As for all those other temporary-but-always-renewed tax measures, will we get any extenders bill in the coming weeks? If so, what will be in it?

Brady, in announcing his bill, touted extenders provisions that he said have bipartisan support. However, even if the extenders bill passes the House, which is more likely since until January it remains under Republican control, things are not so sure in the Senate.

The tax package would need 60 votes to clear the upper chamber, meaning it needs some Democratic support there.

Get ready. It's going to be another busy holiday and tax time in D.C.