Did you get all your shopping done on Cyber Monday? A lot of us did.

Adobe, which tracks the multitude of transactions among major U.S. retailers, projects that online sales this Cyber Monday will be $7.8 billion. That's an 18.3 percent increase from the $6.6 billion spent last year on the Monday after Thanksgiving.

If that figure is reached (or bettered), it would make Cyber Monday the highest-selling day of the 2018 holiday season.

Those sales amounts seem to support the argument made by online sales tax advocates that the levies wouldn't materially deter cyber shoppers.

Court opens door for more online tax collection: That was tested to the greatest extent this year with the first Cyber Monday since the U.S. Supreme Court in June ruled that states can collect sales tax from companies even if they don't have a physical presence, aka nexus, in the locales.

The High Court's 5-to-4 decision in South Dakota v. Wayfair didn't mean that all states with sales taxes immediately started demanding the money from online retailers. But a handful did have collection rules in place in time for Cyber Monday and others plan to have them take effect early next year.

The Tax Foundation has an update of the states with or near collecting sales tax on online purchases.

The Washington, D.C.-based nonprofit tax policy organization also has the neat map (below) that displays the states and how much they've done so far, in the Tax Foundation's estimation, to prepare for the added task of remote sales tax collection. 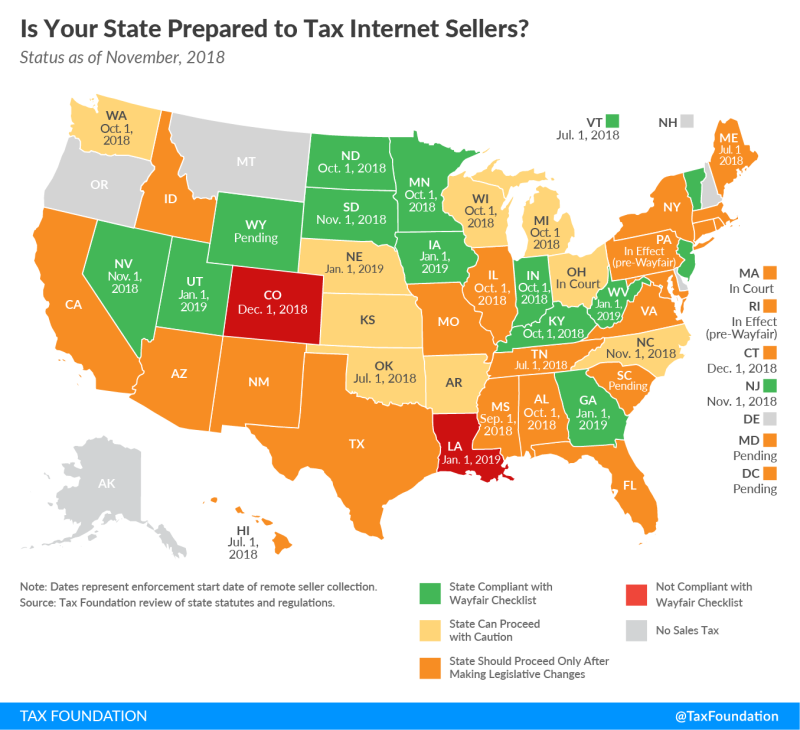 Don't forget the use tax: While we shoppers wait for our state tax collectors to get their acts together, this holiday shopping season is a good time for us to prepare, too.

In many cases, retailers (like Amazon) already are collecting the state taxes. But in those instances where that's not happening, remember that if your state has a sales tax — that 45 of them plus the District of Columbia — then you owe a use tax.

These taxes typically are the same rate as the state sales tax and are just what the name implies. They cover the use of a product you picked up elsewhere, or online, but didn't pay a tax on at the time of purchase. Instead, you figure and pay the use tax yourself, either via a direct filing or when you complete your annual state tax return.

Most people don't pay use taxes because they don't know about them. Or they are willing to gamble that their state officials won't be able to track them down.

This ignorance and/or ignoring of use taxes is why they often are called useless taxes.

It's also why we've ended up with the Supreme Court's Wayfair decision.

So quit complaining about the seller tacking on those extra dollars and/or your state officials. Blame tax evaders, including yourself if applicable, for the reason that by this time next year, every state with a sales tax will be getting its piece of Cyber Monday sales.