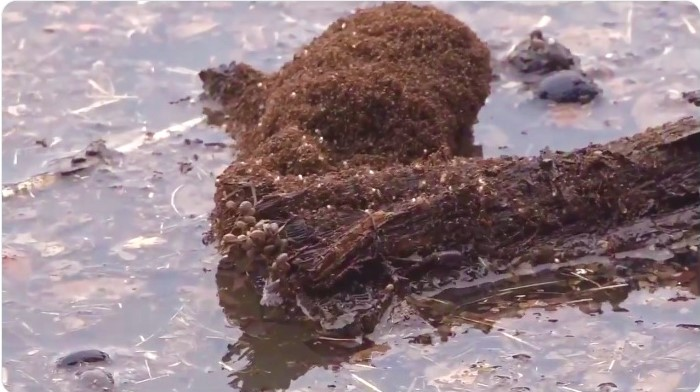 On top of everything else, the Texas floods have produced rafts of floating fire ants. Click image to see KVUE News Twitter video of this monstrosity!

There are new stories every day about folks working to reclaim a semblance of normal after the massive destruction of Hurricanes Florence and Michael.

Here in Central Texas, hundreds of homes and businesses were (and some still are) under water. Our governor is considering whether to ask Uncle Sam for federal disaster relief to help affected folks get back on their feet.

If the Lone Star State does ask and get federal disaster relief, it will add to the billions already spent on recovery assistance in 2018.

Despite the petty Congressional haggling over how much money to spend on devastated areas — remember the politically partisan fights over Hurricane Sandy in the more Democratic-leaning Northeast and the tit-for-tat follow-up when Hurricane Harvey hit conservative Texas? — most of us agree that federal funds to help our fellow Americans who suffered at the hands of a major natural disaster is a good use of our tax dollars.

But this hurricane season, such help has reemerged as a heavy-handed political tool. The reason is that the need for more federal funding has coincided with the dramatic increase in the federal deficit.

A dramatic deficit increase: The Treasury Department last week said the federal deficit grew to $779 billion this year. That's a 17 percent increase from 2017 and the largest deficit since 2012, when we were still dealing with the effects of the recession.

Donald J. Trump, in his recent interview with the Associated Press, blamed the cost of cleaning up after Mother Nature's recent wrath for that dramatic hike in the federal deficit.

"We had to do things that we had to do," Trump said, citing $306 billion spent on disaster recovery efforts. That's why, he told the news service, our budget deficit has ballooned.

Not surprisingly, given Trump's penchant for hyperbole, he grossly inflated the federal spending on disaster areas.

Why the deficit has grown so much: The Congressional Budget Office (CBO) says those dollars drove up the deficit by $40 billion in 2018, not near the $306 billion Trump claimed.

The real reason is the Republican tax cuts.

Vox has examined the deficit and contributing factors and determined that the Tax Cuts and Jobs Act changes are the major reason the deficit swelled this year.

The news site's breakdown of the deficit figures and earns this week's Saturday Shout Out.

I'll let you read the entire article at our leisure. That is, after all, the reason for the regular weekend hand off to other tax stories and blog posts. (OK, so it's mostly about me being able to blog less, but still.)

To whet your appetite for reading about the deficit on a weekend are Vox's highlights in graphical form, based on data from the CBO and the Committee for a Responsible Budget (CFRB). 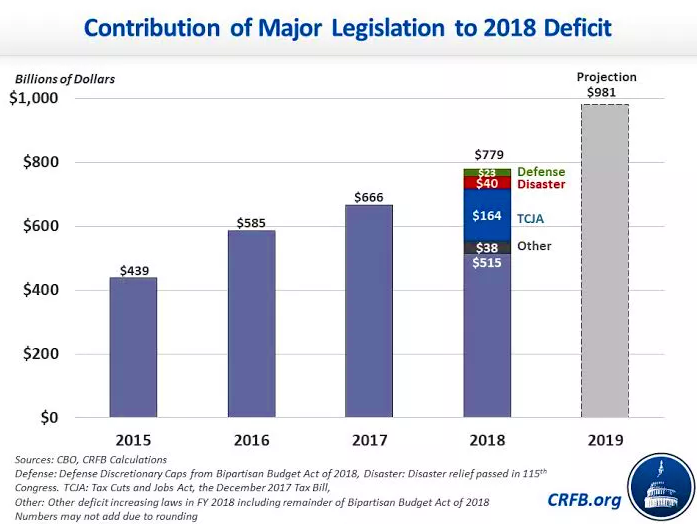 Entitlement money targeted to fill deficit hole: Republican leaders in the House and Senate now say that revamping entitlements, that's government speak for Social Security and Medicare, is the only way to plug he deficit hole.

That's going to make for some fun times on Capitol Hill if the GOP retains both chambers of Congress after the midterms. Any such efforts will be met with harsh criticism from not only current and future benefit recipients, senior advocacy groups and Congressional Democrats, but also Trump.

We'll have to see if this is promise, which Trump also made during his campaign, is committed to keeping.

Under current law, interest is projected to grow from $263 billion in 2017 to $965 billion by 2028, which would make it 14% of the budget, the report says. If the spending increases and tax cuts are made permanent, annual interest costs will exceed $1 trillion.