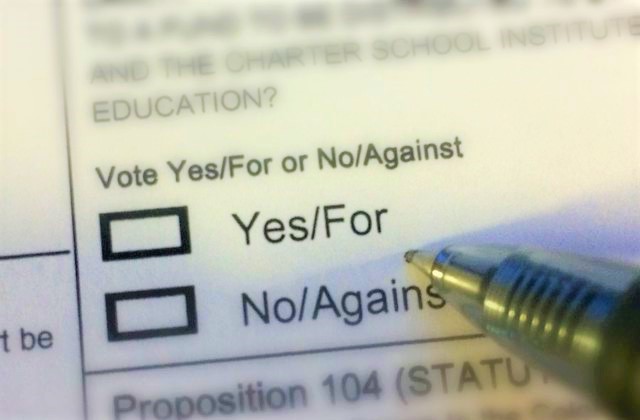 Voters across the United States will vote for Congressional and state candidates that will have a profound effect on their lives for the next several years.

But just as important are the fates of 155 statewide ballot measures that voters in 37 states will be asked to decide on Nov. 6.

And many of those initiatives are about taxes.

With a week to go before the midterm elections, here's a bit of background on ballot measures and a look at some of the notable tax-related issues that many of us will decide.

Sin taxes not a sure thing: Since we're a country with Puritanical roots, the ballot measures that tend to get the most attention are those that address what many see as vices. The taxes levied on such activities, popularly and collectively called sin taxes, are almost as divisive as the vices they target

In sin tax instances, lawmakers look to fiscally punish folks who engage in activities that are deemed unhealthy. The argument for the levies is that they are for the taxed offenders' own good, encouraging them to be and do better.

Another, and maybe more pressing, reason is that sin taxes provide an easy way for states and local jurisdictions to add money to their coffers.

Even when people agree that some habits should be broken, then don't necessarily like Big Brother making the call via their pocketbooks. That's why sin taxes aren't sure ballot bets.

This November, some voters in several states will decide on sin taxes that apply to sugary beverages and tobacco.

Soda taxes: The Pacific Northwest is ground zero this election year when it comes to beverage taxes. Voters in Washington and Oregon will decide initiatives that basically are designed to limit tax sodas in those states.

As is too often the case with ballot questions, their formulation and wording is confusing. And supporters and opponents complicate things even more with pro and con campaigns that obfuscate the issue.

That, says the nonprofit Tax Policy Center (TPC), is the case in the Evergreen and Beaver States. TPC research associate Richard C. Auxier notes in the group's TaxVox blog:

Proponents of ballot initiatives in Oregon and Washington would like me to label this section "grocery taxes" but that would be misleading. Oregon’s Measure 103 and Washington's Initiative 1634 read like they ban taxes on groceries, and Oregon’s pro-103 group even sports a vegetable-filled grocery bag as its campaign logo.

But Washington (like most other states) already exempts groceries from its sales tax and Oregon doesn’t even have a sales tax. That’s why these votes are actually about one grocery item that’s increasingly taxed: soda. There are good arguments about whether and how to tax soda and what to do with the revenue. Claiming you're protecting grocery shoppers isn't one of them.

So do your own research, Washington and Oregon voters, before you head to your polling places.

Tobacco taxes: Montana and South Dakota voters will determine whether smokers in their states will pay more for feeding their nicotine habit.

Montana's I-185, the Extend Medicaid Expansion and Increase Tobacco Taxes Initiative, is as the name indicates a combination question.

If enough Treasure State voters say yes to I-185, Montana would extend expanded eligibility for Medicaid coverage and raise taxes on tobacco products to fund the state's expansion programs beyond the current June 30, 2019, expiration date, as well as other healthcare-related programs.

Big Tobacco is hoping the almost $9 million it has spent so far to defeat the measure pays off. Much of that money has been spent on advertising against the initiative in print campaign materials, as well as on broadcast, cable, radio, satellite and digital ads.

Healthy Montana, the biggest backer of I-185, has contributed $3.5 million this election cycle to promote the medical care expansion and associated tobacco tax.

Recreational marijuana and taxes (or not): There's tobacco. Then there's wacky tobacky. And there also are some tax measures next week in connection with the latter.

Voters in five states will decide seven measures regarding the legalization of medical or recreational marijuana.

If approved, Michigan and North Dakota would join the list of states that have made personal-use pot permissible.

Michigan's Proposal 1 would legalize marijuana possession and recreational use for persons age 21 or older. To enjoy the herb, they would pay a 10 percent excise tax on purchases.

North Dakota's Measure 3 would legalize personal pot, but beyond the age limit it is vague. There is no limit on the amount of pot that can be possessed. Neither is there any mention of a regulatory structure for marijuana sales or taxation of the herb.

That's intentional, according to Cole Haymond, an adviser to the Legalize ND campaign. "We leave our bill wide open so the legislature can do their job — regulations, taxes, zoning, whatever,” he told The Washington Post in July.

Oklahoma voters will see State Question 788 to make marijuana a legal medical option on their ballots.

Utah ballots will include Proposition 2, which would legalize the herb as a medical treatment.

All five of these proposals also have provisions that would tax marijuana used in these cases.

Property taxes: Many homeowners across the country can tell you how expensive tax-wise their residences have gotten.

Data bears out those anecdotal tax complaints. The median U.S. home price has risen by 40 percent in five years.

Voters in California and Louisiana get a chance next week to vote on ballot questions that would reduce their property taxes.

California's Proposition 5 would allow age 55 or older or disabled home buyers, as well as those who are or homeless because of a natural disaster, to pay taxes on only a portion of their new home's market value.

Governing magazine notes that the Golden State proposal is controversial because it expands the state's existing constitutional limit on property taxes. That limit, which was established by Prop. 13, has been in place for 40 years and only allows homes to be taxed at their market value when they were last sold. It means that those who live in their homes for a long time ultimately pay artificially low taxes.

Louisiana voters will determine whether to approve Amendment 6, which would phase in homeowners' new property taxes over four years.

In the state that's as famous for its Los Angeles area traffic jams as its gorgeous Pacific Coast Highway views, voters will decide Proposition 6, the Voter Approval for Future Gas and Vehicle Taxes and 2017 Tax Repeal Initiative.

Transportation questions also will be before voters Nov. 6 in Missouri and Colorado.

Show Me State voters will determine whether to approve Proposition D. If they do, the initiative would, among other things — there's also an Olympics medal state income tax exemption in the mix here; yeah, I have no idea why the two are combined either — increase Missouri's 17.3 cents per gallon gas tax by 10 cents per gallon. It wouldn't be one big tax hike; rather it would be phased in over four years.

Colorado voters will see two ballot initiatives to fund transportation. Proposition 110 would increase the sales tax rate from 2.9 percent to 3.52 percent over 20 years. Proposition 109 would use money from the general fund.

More tax ballots questions: These are just a few of the tax-related ballot questions that voters across the United States will decide. There also are others at local election levels.

Governing also has listed what it considers the most important (tax and more) ballot questions in this upcoming election.

The National Conference of State Legislatures (NCSL) Statewide Ballot Measures Database includes all statewide ballot measures in the 50 states and the District of Columbia. You can sort to search for both current questions as well as historic measures.

For additional tax-specific overviews of ballot questions, peruse the articles at TPC's TaxVox blog and at The Tax Foundation.

For your individual ballot question specifics, check with your state and local election officials to get a copy of the ballot you'll see when you go to vote.

You also can use Ballotpedia's online sample ballot lookup tool to get a preview before you head to your polling station next week or, if allowed, vote early. I just did, and I love the easy-to-read information, complete with images.

Yeah, it's a lot of stuff to deal with before exercising your civic right and responsibility. But all the questions, tax and otherwise, could have profound effects on your life.

So do your homework. And most importantly, vote!

P.S. — If you need something beside a tax ballot initiative to motivate you to head to the polls, my tumblr microblog Tumbling Taxes includes a Rock the Vote video on the history of U.S. voting.

this is interesting! thanks!