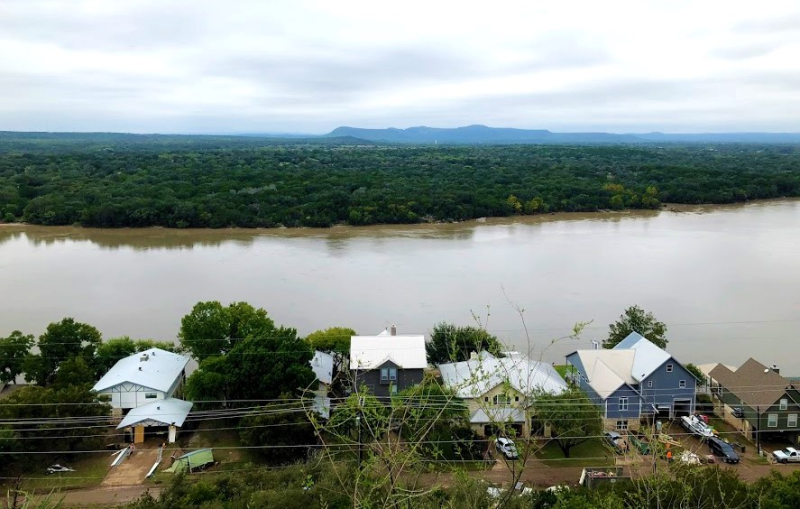 Homes along Lake LBJ sustained flood damage after recent torrential rains sent Central Texas waterways over their banks. The effect of too many days of too much rain is indicated by the debris and dumpsters outside the homes, as well as the lake's water up to the tree canopy and the usually blue water turned muddy by the waters that rushed into it from upstream. (Photo taken Oct. 18, 2018, by Kay Bell)

We had a magnificent weather weekend, with two gorgeous days in the Austin area and we get to start this new week with more sunshine and full access to our water!

For the last seven or so days, we've been boiling water for consumption and cooking and taking our chances if we — or our family, friend and coworkers — decided we just had to shower.

Another round of rain is forecast for Halloween night (sorry, trick-or-treaters) as a cold front moves through. But we're all hoping that the ground has recovered enough to absorb this round of brief showers.

Central Texas is not alone in getting hit by periodic deluges. My friends in the Southwest have endured excessive rain from Pacific hurricanes that made landfall in Mexico and then moved into the continental United States.

And Pennsylvanians are coping with a couple of rounds of rainy nor'easters.

Rain tax's political power: Some parts of the country deal with runoff thanks to facilities that were funded by rain taxes.

This isn't a new tax. In fact, technically it's a fee, not a tax, that shows up on bills as a stormwater or runoff charge.

But the rain tax tag is more effective, at least politically, than the more accurate stormwater fee moniker. While fees can be annoying, almost everybody hates taxes.

"Beto O'Rourke wants higher taxes," Cruz said. "In El Paso [O'Rourke's hometown] he even voted for something called a rain tax. I don't even know what that is, but here in Texas we celebrate when it rains."

Paying for wasted rain: So what is the rain tax of which Cruz admitted his ignorance?

The fee is imposed, usually at a local governmental level, on residential and/or business property owners, to pay for efforts to mitigate the costs of dealing with rain runoff and stormwater drainage infrastructure.

The methodology that most places use originated in Germany in the 1990. The assessed tax (or fee) typically is based on a property's percentage of impervious area, those places covered by concrete or asphalt or other material that does not absorb rain.

The goal is not only to collect money for government project, but also entice people into changing, where possible their landscapes so that water isn't funneled into gutters and drains and ultimately into the localities' water treatment facilities.

Here in Austin, if you revamp your landscaping so that more absorbing soil replaces the hard, water-wasting cover, the city will reduce your rain tax.

Pennsylvania rain taxes on tap: The stormwater fees are common across the country.

Many places have instituted them. Sometimes they're permanent. Other times, they are temporary to help pay for a specific environmental project. And often they come and go as different political leaders take over city, county and water district governing bodies.

In the Keystone State, a couple of places are looking into new rain taxes.

This fee will be used to fund stormwater management upgrades, which then should improve the environmental health of the Paxton, Beaver and Spring creeks. Those waters eventually end up in the Chesapeake Bay.

York residents are facing a similar fee. Residents in that Southeastern Pennsylvania community were decidedly unhappy at a meeting last month to discuss that rain tax, which will cost residential owners a $48.90 annual fee. Parcels of farmland and commercial properties also would be taxed.

The spate of Pennsylvania rain taxes is not so much due to rainy weather, but instead responses to impending federal and state rules to address stream pollution.

However, York residents were told, the new fee also would address problems like recent flooding that destroyed homes and washed out roads.

Maryland fees and floods: Such flood damage might have some folks in neighboring Maryland wishing their rain tax was still in effect.

In 2012, the Old Line State's legislature passed a bill to implement a tax on paved surfaces to help pay for stormwater management. Opponents immediately denounced the bill, officially known as the Stormwater Management-Watershed and Restoration Program, as a rain tax.

The measure not only addressed ways to prevent contaminants from entering local bodies of water and eventually the Chesapeake Bay, but also deal with the volume of stormwater flow. The nine Maryland counties affected by the bill were granted the flexibility to implement it as their needs required.

Two years later, the political climate in Annapolis changed and the new Republican leadership repealed the stormwater fees within a year.

Since then, the historic Maryland community Ellicott City has suffered two catastrophic floods, one in 2016 and a worse one back in May.

Would a rain tax have made a difference? Given the ferocity of this year's flood, maybe not.

But supporters of the rain tax argue that the elimination of the fee meant that Howard County where Ellicott City is located lost six years in which the rain tax money could have used to establish more technically sound policies addressing stormwater runoff.

Does your area impose a rain tax? If so, have you ever tried to have it reduced, if allowed, by making your property more water absorption friendly?